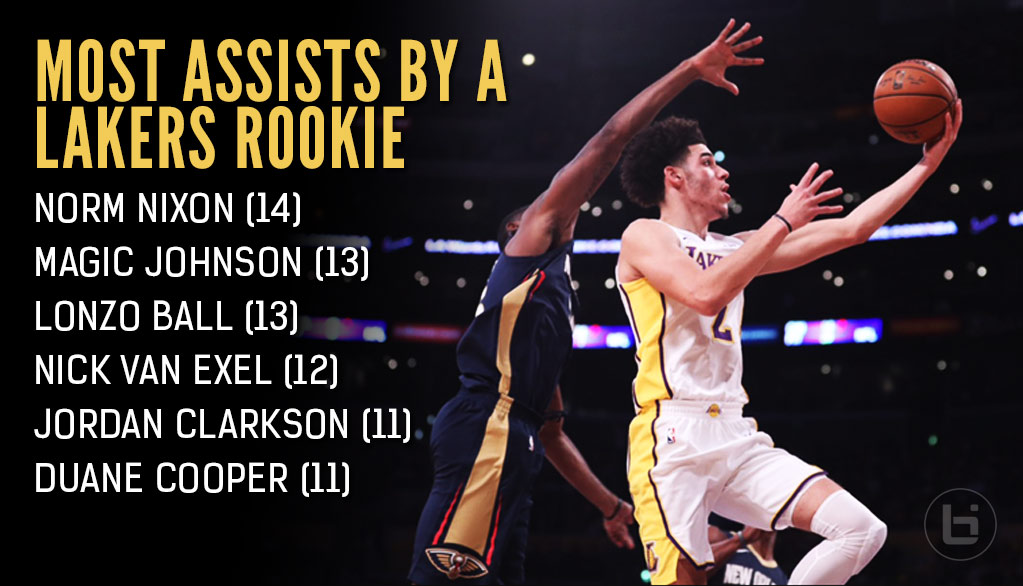 After scoring a game-high 28 in the Lakers win over the mess that is the 2017 Phoenix Suns, Lonzo Ball couldn’t throw a rock in the ...(Read more)

After scoring a game-high 28 in the Lakers win over the mess that is the 2017 Phoenix Suns, Lonzo Ball couldn’t throw a rock in the ocean against the New Orleans Pelicans and their Twin Towers on Sunday.

Ball missed 10 of his 13 shots (most shot attempts by a starter) and finished with just eight points. He also had eight boards and a game-high 13 assists, which was good enough to tie Magic Johnson for the second most assists in a game by a Lakers rookie; Stormin’ Norman Nixon (the actual point guard during Magic Johnson’s rookie year) has the franchise record with 14. Here’s the highs in assists by a few other notable Lakers’ guards during their rookie seasons:

Despite the 13 dimes, an impressive debut by Kentavious Caldwell-Pope, 20 points by fellow rookie Kyle Kuzma, a great 2nd half performance by Jordan Clarkson, and a 27-4 run in the 2nd half, the Lakers still lost 119-112.

After the game, LaVar (Yes, we do have to hear from LaVar after every game) praised the Lakers late rally but thinks Lonzo, who is averaging nine rebounds after three games, should have crashed the boards more in the final five minutes of the game. He also had a message for John Wall and the Wizards that I’m sure will go viral: “They better beware cause Lonzo ain’t losing again. Not in the same week!”