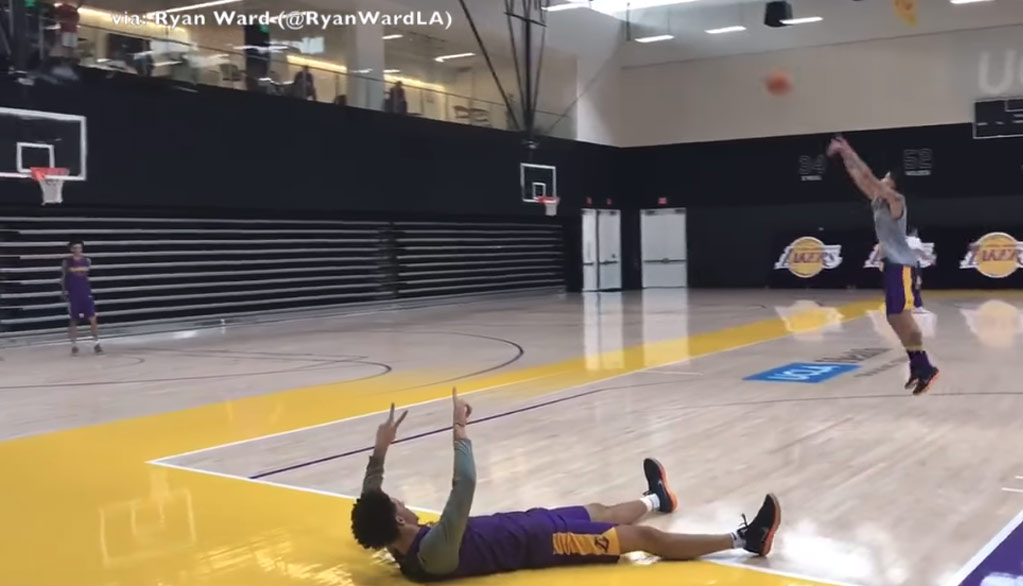 It’s just Lakers rookies Lonzo Ball and Kyle Kuzma showing off their long range shooting skills in a half-court shootout. Lonzo also shows off his trash-talking (I wonder where he gets it from) and catwalking skills (around the one-minute mark) in the amusing video that I guarantee will have anti-Ball Family people talking trash about Lonzo’s not-so-pretty shooting form and/or saying the No. 2 pick isn’t as good as the 27th pick because of how great Kuzma played during the preseason. I love chanting Kooz as much as any other Lakers fan but I can guarantee Lonzo Ball is going to be a star for the franchise.

Speaking of Lakers and stars, I’m going to use this as an opportunity to remember the now retired Shooting Stars Competition from NBA All-Star weekend. The event started in 2004 and ended in 2015 when people got tired of watching Team Bosh (Chris Bosh, Swin Cash, Dominique Wilkins) win every year (three in a row) of the not-so-exciting event that was won or lost based on how quickly a team could hit a half-court shot. I also brought this up because the inaugural event was won by Team Los Angeles with Lisa Leslie and former Lakers Magic Johnson and Derek Fisher.

Back to Lonzo and all of his skills (minus the rapping ones). Here’s a hilarious video of him dunking, working on his runway walk and twerking….followed by him and Kuzma having a three-point competition during practice. His form might not be Sidney Deane worthy but the results aren’t bad.

In case you were wondering how well (or poorly) Ball and Kuzma shot during the preseason: