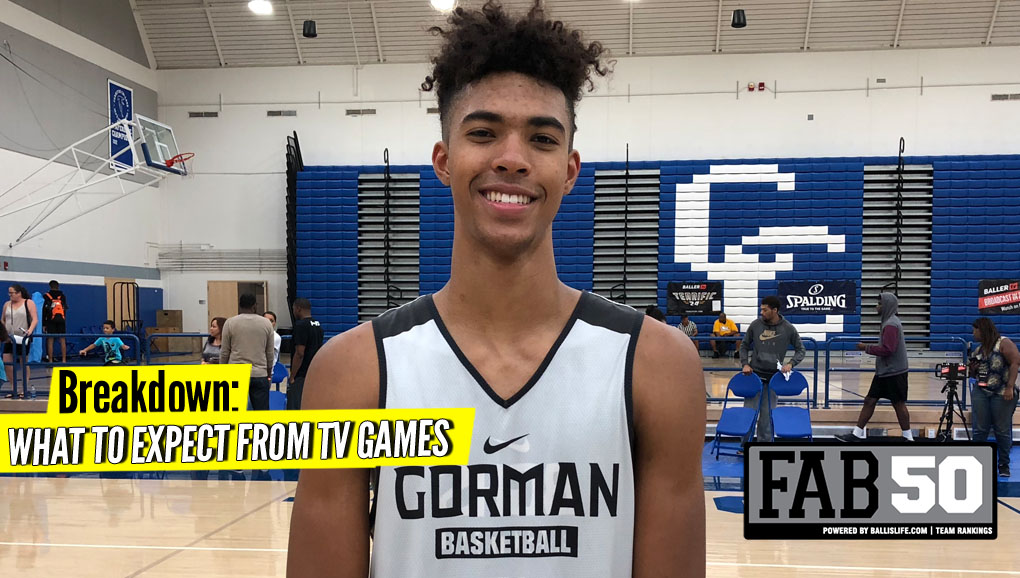 Looking Ahead: What To Expect From TV Games

On Thursday night, FAB 50 No. 14 Bishop Gorman (Las Vegas) topped Coronado (Henderson, Nev.) 88-75 in its season opener on ESPNU. There will be 10 more nationally televised games on ESPN’s family of networks involving FAB 50 ranked teams. We give a quick breakdown of what to expect in each contest and take a look at some of the impact freshman around the country on highly-regarded teams.

Bishop Gorman has won seven straight Nevada state championships, but that didn’t matter to the relatively young club at Coronado (Henderson, Nev.) on Thursdays night in the season opener for both teams. The Cougars gave Gorman all it could handle, even taking a 48-46 lead on a 3-pointer by 6-foot-1 freshman guard Richard Isaacs Jr., after trailing 44-42 at halftime. Coronado ran out of gas down the stretch and the deeper Gaels won going away.

Coronado stayed in the game behind the inside play of 6-foot-5 junior forward Tyrelle “Fat Daddy” Hunt, who muscled his way inside to 16 points and seven rebounds in the first half. Most of his finishes with off pretty feeds from 6-foot-4 sophomore guard Jaden Hardy, who had seven assists in the first half.

In the first half, Bishop Gorman’s Isaiah Cottrell, a 6-foot-9 junior center and a key to its fortunes this season, got into foul trouble and didn’t convert a single field goal, as he scored on a single free throw. It was a completely different story in the second half, as Cottrell scored on a variety of half hooks and inside power moves. He scored 19 points in the second half and finished with 20 points.

Bishop Gorman received a terrific outing from 6-foot-4 sophomore shooting guard Will McClendon, who nailed four 3-pointers and finished with 25 points while providing a defensive spark throughout. Junior guard Noah Taitz netted 18 points for the Gaels, and hit clutch shots at key moments of the game. Hunt finished with a game-high 26 points and 11 rebounds while Hardy, one of the top-rated sophomores in the country, finished with 17 points.

It’s not often an elite high school player makes his high school basketball debut on national television, but that was the case for Isaacs Jr.. Arguably the top freshman guard on the fall Pangos Frosh/Soph Camp tour, Isaacs showed why he’s so highly-regarded in the national Class of 2022. He scored nine points on three field goal attempts in the first half and displayed the ability to distribute at a high level and create his own offense off the dribble. He finished with 15 points, but like the rest of his Coronado teammates, wishes a couple of his shot attempts down the stretch had fallen.

In addition to Isaacs, here are other top impact freshmen (Class of 2022) on FAB 50 ranked teams or considered among the best in the country (listed alphabetically):

Bishop Gorman won’t appear again on national television, but will appear on the ESPN+ streaming service twice next week at the Hoophall West event in Scottsdale, Ariz. The Gaels will face No. 16 Guyer (Denton, Texas) on December 7 and No. 41 Gonzaga Prep (Spokane, Wash.) the following day. Guyer is not a tall team by national standards, but Texas’ top-ranked team is battle-tested and will give Bishop Gorman all it can handle. Cottrell will have his hands full inside with Gonzaga-bound Anton Watson of Gonzaga Prep, which will likely face No. 30 Federal Way down the line for a Washington state crown. For these teams, however, there’s still a ways to go before worrying about playoff scenarios. Below is a breakdown of what to expect in the rest of the nationally-televised ESPN contests.

San Joaquin Memorial (Fresno, Calif.)  vs. Pinnacle (Phoenix, Ariz.), 12/6, 9 pm ET
Both teams were on the FAB 50 bubble this week, but San Joaquin Memorial already suffered a home loss this week to Northern California power Bishop O’Dowd (Oakland, Calif.). Talented junior Jalen Green played terrific in two games to open the season at the Thanksgiving Hoopfest, but didn’t shoot well from the field in the loss to O’Dowd. Pinnacle, which features highly-rated point guard Nico Mannion, will look to coral Green and hopes he tries to get in an individual duel with its Arizona-bound guard. Pinnacle is 5-0 to begin the season, and had a big test Friday night vesus FAB 50 No. 18 Shadow Mountain (Phoenix, Ariz.).

In a battle of defending AIA state champions, Pinnacle won at the buzzer, 82-81, as Mannion (37 points) made a miraculous 30-footer with two defenders draped all over him to win the emotional game at home. Pinnacle’s victory snapped Shadow Mountain’s 73-game winning streak against in-state AIA opponents and sets up an interesting game next week for Pinnacle versus a San Joaquin Memorial team that is coming off a tough loss at the buzzer. Will Pinnacle be emotionally up for that game? As if that’s not enough, two nights later on Saturday Pinnacle’s game with No. 23 Rancho Christian just got much bigger in significance.

Mayfair (Lakewood, Calif.) at No. 7 Sierra Canyon (Chatsworth, Calif.), 1/4/19, 11:30 pm ET
Sierra Canyon will be a big favorite at home in a game that will feature highly-regarded junior guard Josh Christopher of Mayfair. Sierra Canyon will likely already have met No. 5 La Lumiere and/or top-ranked Montverde Academy at the Iolani Classic in Hawaii before Christmas. Regardless of the outcome of the December games, from a FAB 50 perspective, this is a must-win for Sierra Canyon.

No. 23 Rancho Christian (Temecula, Calif.) vs. No. 15 Memphis East (Memphis, Tenn.), 1/11, 9 pm ET
This game will pit the Mobley brothers, senior Isaiah and top-rated junior Evan, versus Memphis recruits James Wiseman (7-0) and Malcolm Dandridge (6-8). Memphis East has played well in the early season behind new coach Jevonte Holmes. Penny Hardaway may be at Memphis, but East’s talent level remains high. We’ll know plenty about Rancho Christian by how it fares at the Tarkanian Classic (Dec. 18-22), where it could meet No. 30 Federal Way in the semifinals with host Bishop Gorman, No. 33 Whitney Young (Chicago) and No. 36 Sheldon (Sacramento, Calif.) in the opposite bracket.

No. 4 IMG Academy (Bradenton, Fla.) vs. No. 2 Oak Hill Academy (Mouth of Wilson, Va.), 1/20, 7:30 pm ET
This is a big game with potential FAB 50 title implications, but it could be a really big one for one of the clubs. That’s because each team is in the bracket of the City of Palms Classic in Ft. Myers, Fla. in December. The game could be a rematch of a potential City of Palms title game or, a revenge game for the team that loses or fails to advance. Perhaps neither team makes it to the title game and then this game takes on even more significance.

No. 30 Federal Way (Wash.) vs. No. 13 Ranney School (Tinton Falls, N.Y.), 1/21, 11 am ET
Jaden McDaniels of Federal Way has quickly risen among the elite of the 2019 class and this could be a pivotal moment for his Mr. Basketball USA candidacy and Federal Way’s national standing. McDaniels will need to have a productive outing matching up against fellow 2019 elites Scottie Lewis and Bryan Antoine of Ranney School. Ranney School has more big stage experience, but if Federal Way fares well at the Tarkanian Classic, this could turn into a game with major rankings ramifications.

No. 23 Rancho Christian (Temecula, Calif.) vs. No. 11 McEachern (Powder Springs, Ga.), 1/21, 1 pm ET
The Eagles play one of the toughest schedules in the county and will be a top two seed at both Tarkanian Classic and The Classic at Damien before the New Year. Afterwards coach Ray Barefield’s club will travel to West Memphis, Ark. for the Memphis East game and faces a talented Santa Margarita (Calif.) club the very next day on January 12 back in Southern California. McEachern is battle-tested with a talented roster and will be highly-motivated regardless of Rancho Christian’s won-loss record coming in. If that’s not enough, Rancho Christian will head to the Montverde Academy Invitational in Florida on a short week.

No. 7 Sierra Canyon (Chatsworth, Calif.) vs. No. 1 Montverde Academy (Montverde, Fla.), 1/21, 3 pm ET
This could be a rematch of the Iolani Classic title game, where it looks like Sierra Canyon will face bubble club Oak Ridge (Orlando, Fla.) in the quarterfinals with a potential matchup with La Lumiere in the semifinals. Montverde Academy will for sure be playing La Lumiere at the Cancer Research Classic on January 5 and plays No. 8 Sunrise Christian Academy and No. 9 Paul VI (Fairfax, Va.) at the ARS National Hoopfest at DeMatha Catholic in Maryland on December 7-8. Sierra Canyon has the talent to play with the Eagles, but will be at a size disadvantage inside.

No. 5 La Lumiere (LaPorte, Ind.) vs. No. 3 DeMatha Catholic (Hyattsville, Md.), 1/21, 5 pm ET
The Stags have their best shot at a mythical FAB 50 title in a generation and this could turn out to be a must-win for coach Mike Jones’ club. DeMatha plays in a tough conference (probably the nation’s toughest) and La Lumiere plays a tough national schedule as well. These two teams matchup quite well and whomever wins the Hunter Dickinson (DeMatha) vs. Isaiah Stewart (LaLu) matchup will be in good shape in this one. Since DeMatha is going to have to beat the ranked teams in the WCAC more than once, a win over an independent program will be key to its national title hopes since the WCAC has not yet participated in GEICO Nationals.

No. 1 Montverde Academy (Montverde, Fla.) vs. No. 2 Oak Hill Academy (Mouth of Wilson, Va.), 2/2, 7:30 pm ET
Obviously if the rankings hold up, this will be the biggest game of the regular season as these two powerhouse programs will meet in the regular season for the first time since meeting in the finals of the 2010 Iolani Classic (58-44 Oak Hill victory) the year before Kevin Boyle took over the Montverde Academy program. These two programs have been in the national title hunt each season for the past decade so this game will be important because each program doesn’t want to lose to another under any circumstances. Both teams are off to strong starts this season and if the rankings hold up, the winner won’t gloat because it will know there is a strong possibility it will need to get past the loser a second time at GEICO Nationals. Montverde Academy will look to slow down Oak Hill’s Cole Anthony and Cam Thomas in the backcourt. On the flip side, The Warriors will have to control the boards and keep Kofi Cockburn out of foul trouble.