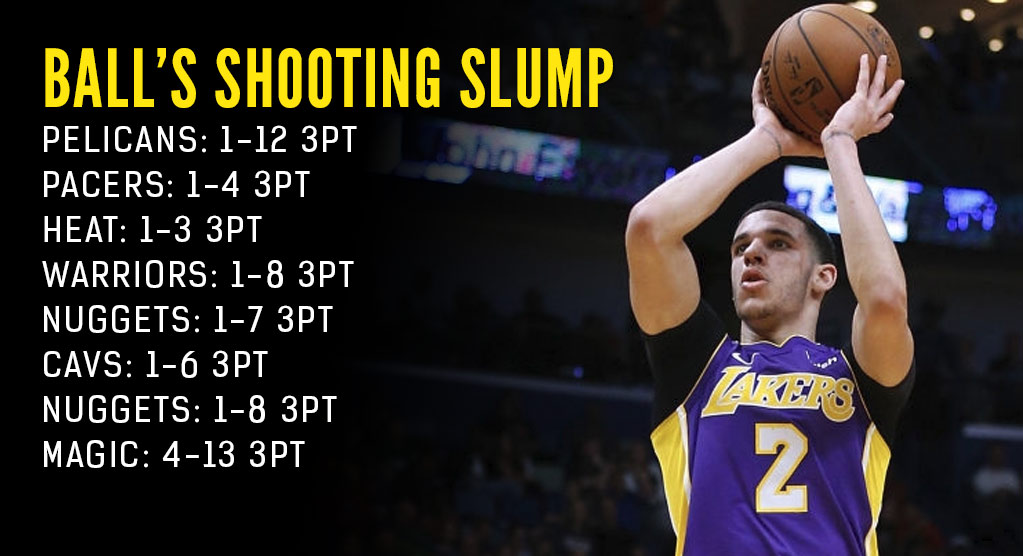 After making just 6-of-36 threes over his last seven games, Lonzo Ball attempted 12 threes against the Pelicans on Thursday. He made one of those 12 ...(Read more)

After making just 6-of-36 threes over his last seven games, Lonzo Ball attempted 12 threes against the Pelicans on Thursday. He made one of those 12 threes.

After the game, teammate Isaiah Thomas defended (no pun intended) Ball’s shooting by saying, “He doesn’t just score, that’s not what he does. He makes plays, he rebounds the ball, he does a little of everything. The next step is him getting that jump shot. And once he’s consistent with that, he’s going to be a complete player and be even harder to guard. The main thing about that is just having the confidence to shoot it and not shying away from the moment or opportunity. And like I told him tonight, ‘keep taking them shots.’ If you get the opportunity, the only thing you can do is miss. He works on it, so he’s going to be alright.”

Coach Luke Walton was just as optimistic when asked about Zo’s poor shooting.

“I want him taking it,” Walton said. “I want a point guard that’s got the courage to step up and take those, even after making a few. None of those were forced. They were open threes in rhythm. We believe in what he’s going to do for us in our future.

“We’re very confident that as he grows and continues to mature in this league, he’s going to be a consistent knockdown shooter, so I’m fine with those.”

My issue isn’t Zo’s shooting percentage from three, it’s the amount of threes he’s taking. 12 is what the entire Pelicans’ starting line-up attempted. 12 is one more than the amount Kentavious Caldwell-Pope attempted but KCP made eight of them. 12 is twice as many as Kyle Kuzma’s attempts and Kuz made four of his six. If you looked around the league last night, the only player who attempted more threes than Zo was Kemba Walker and he made 10-of-14!

I’m not asking Zo to avoid the three-point line like Ben “I’m great at scoring off the court (Tinashe!)” Simmons but he’s averaging over eight three-point attempts a game over his last 10; the only players in the league averaging that many thee-point attempts this season are James Harden (10.3), Steph Curry (9.9), Eric Gordon (8.8) and Damian Lillard (8.5). I also wouldn’t mind seeing his 1.3 attempts from the free throw line go up a little. He did try to throw down on Anthony Davis and got blocked but I love the idea of him attacking the rim.

Here’s an encouraging stat for Lakers fans: Birthday boy Jason Kidd had the nickname Ason Kidd as a rookie because he didn’t have a J. He left the league 3rd (now he’s 9th) in all-time made 3-pointers for the regular season & 8th in Playoffs. Granted, he played a lot of seasons (19!) but when people look back at Kidd’s Hall of Fame basketball career, no one is pointing out how poor his shooting was during his rookie season. They point at his ring and mention how he’s second all-time in assists (no one will ever catch Stockton’s record) and third in triple doubles. The only black eye (no pun intended) on his resume is his coaching.