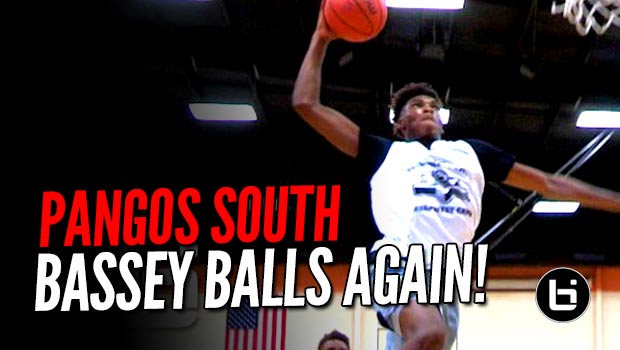 This past Sunday the temperature heated up in Dallas and it was also hot inside the Triple A/Focused Learning Academy for the second day of the Pangos ...(Read more)

This past Sunday the temperature heated up in Dallas and it was also hot inside the Triple A/Focused Learning Academy for the second day of the Pangos All-South Frosh/Soph Camp. It got really “turnt up” when it came time to selecting the events best players for the Cream of the Crop All-Star games. When things finally cooled off, 2019 standout center Charles Bassey was named camp MVP for the second consecutive season. Other Sunday standouts included Tyreek Smith, Moses Moody and Arthur Kaluma.

Dallas — Everything in Texas is big, so it was only fitting the 2016 Pangos All-South Frosh/Soph Camp’s MVP turned out to be the player with the largest name and game. That would be one 6-foot-10 Charles Bassey of St. Anthony of San Antonio, who dominated the camp from start to finish with consistent paint performances.

Bassey is just too athletic and skilled for nearly any big man in the country to handle, and even though a couple of post players turned in valiant individual efforts against the sophomore wunderkind, he rose to the occasion in every outing. Bassey operates with efficiency in the half court, rarely taking a bad short and passing with precision from the post. He’s also a terror in the open court and handles the ball well enough to push it, dish it and get the return pass for the finish.

Although Bassey was just as dominant this past weekend as he was at last year’s camp, we won’t spend much time on his exploits because most who follow the grassroots and high school landscape know all about him. The buzz didn’t center on one player; as there was a large group of standout performers with similar abilities. The slew of talented wingmen and offensive-minded point guards, not to mention the sheer number of participants, made for some tough choices for the Cream of the Crop Top 30 and Top 60 All-Star Game selections. To be honest the discussions were as heated as the West Texas sun can be, and as a result there were likely deserving players who didn’t receive all-star recognition.

Tyreek is Geeked in Cream of the Crop Game

Among those selected for the top all-star game, nobody did more to help his overall showing at the event than 6-foot-8 forward Tyreek Smith of Advanced International Prep (Dallas). Smith led his White team to a 106-58 victory over the Black team by scoring 24 points and grabbing eight rebounds while adding two second half steals. The White team led 34-26 at halftime, but pulled away in the second half by converting the Black team’s missed field goal attempts into easy transition buckets on the other end.

No one played with more consistent energy through the camp’s conclusion than Smith, as consistent effort was one of the major differentiators in this camp. Some of the more talented players tailed off near the end, but Smith’s game grew as he got more comfortable with the playing atmosphere. Smith wasn’t sure of himself or his role in his first game, but loosened up and played like one of the camp’s top players on Sunday. Smith has large and strong hands and just needs to work on his touch around the basket to take his game to the next level.

Charles Smith IV, a 6-foot-5 2019 prospect from Westbury Christian (Houston) who was one of the camp’s better freshman in 2015, also had a strong performance for the victorious White team with 19 points and four rebounds. Smith was consistent with his shooting and offensive play-making throughout the event. Bassey also played for the winning club, finishing with six points and four blocks in a game played with two, 25-minute running clock halves and 15 players per team.

Another consistent performer who got better as the weekend went on was 6-foot-4 guard Moses Moody of Parkview (Little Rock, Ark.). Moody has a smooth approach to the game and excels at both guard positions. He is best at slashing to the basket or pulling up for a quick jumper, but he’s also an excellent passer in the half court set. Moody, who was a standout at the Pangos Junior All-American Camp last February, was one of the top three freshmen at the Pangos All-South Frosh/Soph Camp along with 6-foot-5 Cade Cunningham (Bowie, Arlington, Texas) and 6-foot-6 Jerry Lliya (Redemption Christian, Troy, N.Y.).

The best of the lot among eighth-graders (2021 prospects) was small forward Arthur Kaluma of Frankfort Middle School in Dallas. He had 11 points and six rebounds in the top all-star game, but even more importantly improved as the camp wore on. Kaluma can handle the ball well in the open court for a small forward-type and is relentless driving to the basket. He has a solid first step and is especially potent operating on the baseline.

With over 220 campers, it was easy to overlook a couple of standouts despite the heated discussions about the merits of the best players.

Some of the top standouts in the Cream of the Crop Top 60 game included 6-foot-3 2020 prospect Jaylen Posey of Grand Prairie (Texas), 5-foot-10 2020 prospect Mike Miles of perennial Texas power Lancaster, and 6-foot 2019 prospect Ty Archibald of Katy (Texas). Miles shot the ball well for the wining White club and Archibald stood out on the defensive side of the ball in a game where defense was non-existent for the most part.

There were also a trio of standouts who didn’t make either all-star game. Those “snubs” were 6-foot-2 2020 prospect Jahari Long of Episcopal (Houston, Texas), 5-foot-10 2019 prospect Christian Williams of Conway (Ark.) and 6-foot 2019 prospect Jalen Jackson of Wagner (San Antonio, Texas). Long was one of the event’s best passing point guards, while Williams and Jackson played with intensity and purpose.