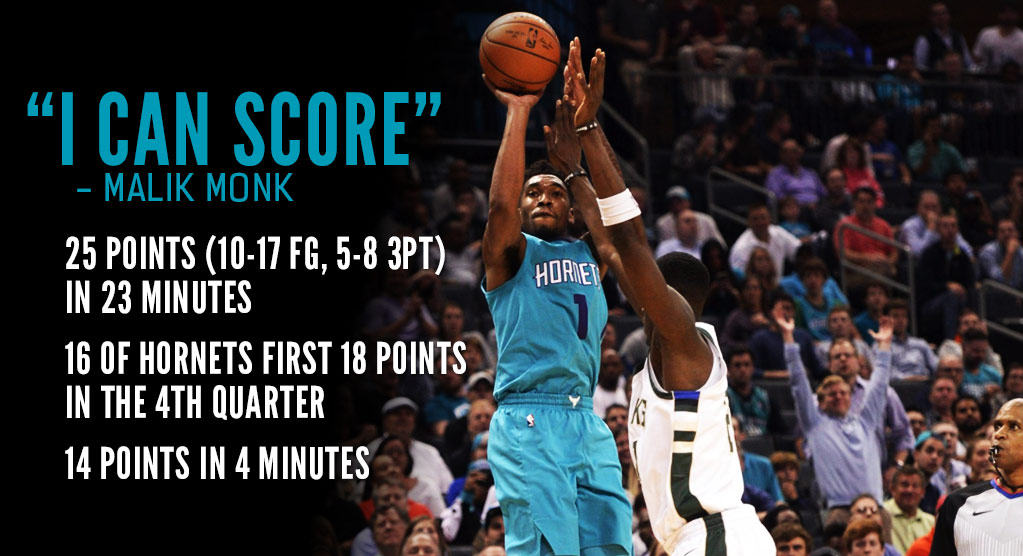 On Wednesday, Malik “You Are Going To Regret Not Drafting Me” Monk treated the Milwaukee Bucks like they were players for the North Carolina Tarheels. The ...(Read more)

On Wednesday, Malik “You Are Going To Regret Not Drafting Me” Monk treated the Milwaukee Bucks like they were players for the North Carolina Tarheels. The 19-year rookie broke out of a shooting slump (9-of-32 over his last three games) and scored a career-high 25 points (10-of-17 shooting) in 23 minutes off the bench. 14 of those 24 came during a four-minute stretch of the fourth quarter; 16 of those 24 made up the Hornets first 18 points of the final quarter.

“I can score,” the 19-year old Monk said with a shrug and a laugh after the victory. “I like shooting the ball, but attacking is going to help open everything else for my teammates.”

As for those teammates, Kemba Walker had 26, Dwight Howard continued his impressive journey to redemption with 17 and 11 and fellow rookie (and former Ballislife All-American and my fellow Seminole) Dwayne Bacon had 10, including some clutch buckets during the Malik Monk show.

The victory ruined a career night by the Bucks’ Khris Middleton, who put up 43 points and 7 assists.

Following Wednesday's win over Milwaukee, @AhmadMonk sounded off on his 25-point game and the play of the second unit #BuzzCity pic.twitter.com/z1uWqrA3TM