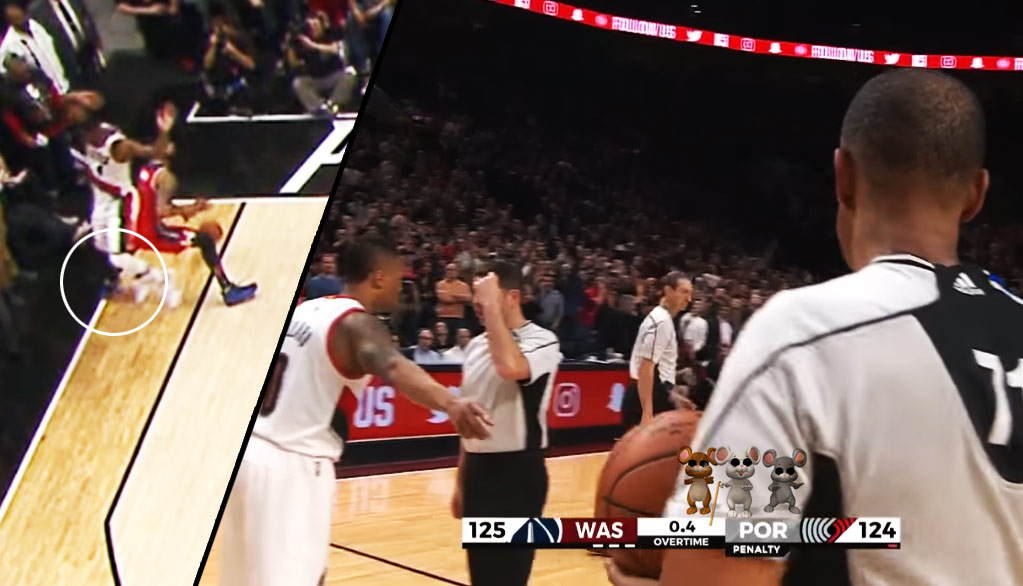 You hate to see a great game with so many stand-out performances end with a controversial call but that’s what happened on Saturday night between the Blazers ...(Read more)

Markieff Morris Hits OT Game-Winner But Stepped Out Of Bounds & The Refs Can’t Review It?!

You hate to see a great game with so many stand-out performances end with a controversial call but that’s what happened on Saturday night between the Blazers and Wizards. Actually, it was more of a controversial no-call.

Down by one with 3.5 seconds left in OT, Markieff “My wife says I have big nuts” Morris caught the ball in the corner, stepped out of bounds, then hit a two with 0.5 seconds on the clock.

Since every player on the court realized Morris stepped out of bounds, the Blazers ran to the three blind mice to tell them the shot shouldn’t have counted. They responded by saying the shot can’t be reviewed?!

“They said `We can’t review it.’ I guess that’s the rules but I don’t understand why we have all these cameras and all this technology in the arena if we’re not going to be able to review a play that determines a win or a loss,” Lillard said. “That’s BS man.”

What’s BS is the NBA is going to release a statement on Sunday saying what we all know and what official Rodney Mott said after the game.

“Yes, we looked at it, and if it was reviewable, it would have been called out of bounds, Portland’s ball,” Mott told a pool reporter.

Despite getting screwed in the final seconds, the Blazers did blow a 70-49 half-time lead and the duo of John Wall and Bradley Beal were spectacular with 39 and 26 points. Lillard and McCollum were also great with 33 and 34 points.