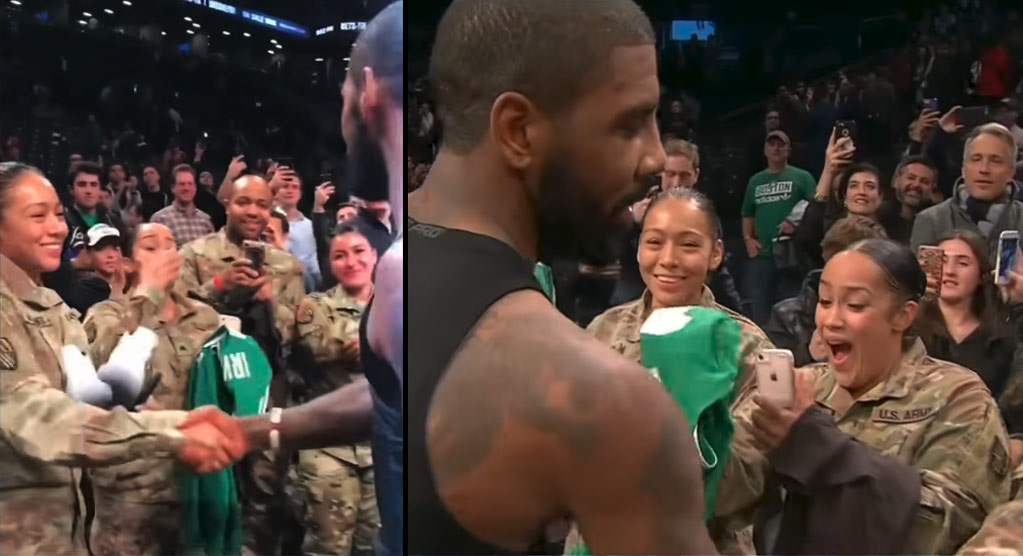 Tuesday was Military Appreciation Night in Brooklyn. And to show his appreciation for a couple of soldiers sitting courtside, Kyrie Irving gave them his jersey and ...(Read more)

Tuesday was Military Appreciation Night in Brooklyn. And to show his appreciation for a couple of soldiers sitting courtside, Kyrie Irving gave them his jersey and shoes, which I assume had his phone number tucked in the shoe (I’m kidding but considering his reputation with the ladies, I might not be wrong). I’m sure he probably wanted to give them the mask he played in too because it was obvious he really hated playing with it. Despite having to wear it, he still put up a game-high 25 points and dished out a team-high 5 assists in just 29 minutes of action against the Nets.

A lot of people, including his teammates, were hoping to see Irving bring out the black mask he wore when he lit up the Knicks for 41. He said he wore the clear one on this night because it helps him see his teammates so he can pass to them.

“They were like, `The masked man! The black mask!” Irving said after the Celtics’ 13th straight win. “I was like, `I scored that many because I just was looking at the basket.”