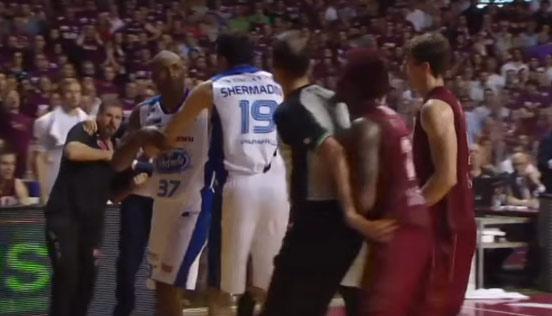 The Panda’s friend bka as Metta World Peace fka Ron Artest has been suspended for 2 games after getting ejected for a “scuffle” with former NBA ...(Read more)

Metta World Peace Almost Fouled Out in 1 Minute, Suspended For Scuffle in Italy

The Panda’s friend bka as Metta World Peace fka Ron Artest has been suspended for 2 games after getting ejected for a “scuffle” with former NBA player Julyan Stone during GM5 against Umana Reyer Venezia.  The suspension will have to take place next season since his Italian team, Pallacanestro Cantu, was eliminated from the playoffs in this game.

So how did Metta play before his ejection? Well, he supposedly had a ridiculous stat line of 5 fouls in just 1 minute! That’s as ridiculous as a guy going by the name of “The Panda’s Friend” getting ejected and suspended for this “scuffle.”  I can’t imagine what this league would have done with a Ron Artest if they had a Malice at the Palace.

Speaking of the infamous Malice at the Palace incident which started when a fan threw water on Artest, if you go to the 2:49 mark of this video you can see his teammate (#19) blocking a water bottle before it hit him. Who knows what would have happened if that bottle would have hit Peace. I’m guessing, the opposite of peace.