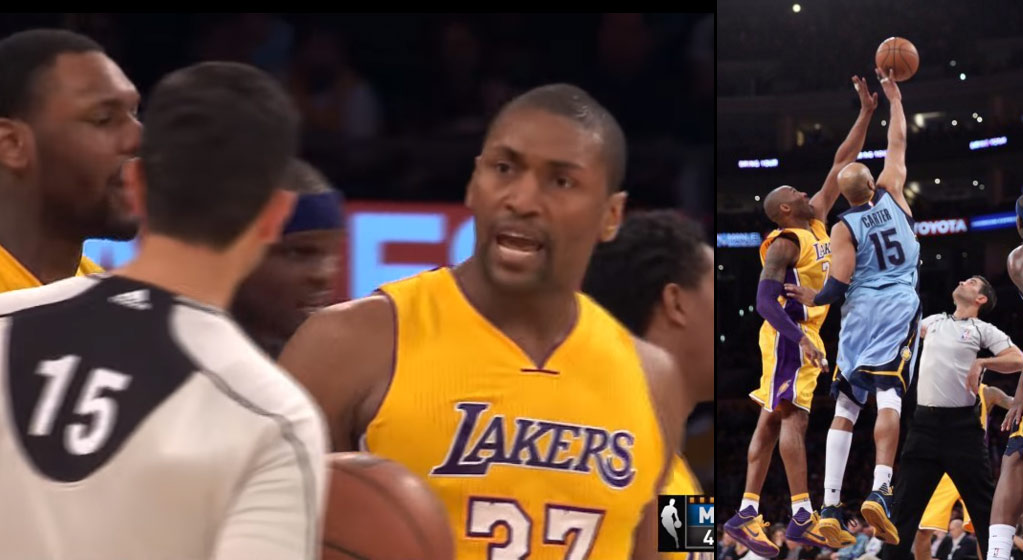 Metta World Peace got to play 13 minutes against the Grizzlies before getting ejected in the 4th quarter for arguing that Vince Carter should have been ...(Read more)

Metta World Peace Gets Ejected, Grizzlies Choose Kobe To Replace Him For A Jump-Ball Against Vince Carter

Metta World Peace got to play 13 minutes against the Grizzlies before getting ejected in the 4th quarter for arguing that Vince Carter should have been called for a personal foul instead of jump ball. Since Metta was sent to the lockers, the Grizzlies were allowed to choose which Laker 39 year old Vince Carter could jump against – they obviously chose 37 year old Kobe Bryant. Kobe checked back into the game and lost the “oldest jump ball in history” to his former AAU teammate.

Kobe might have lost the jumpball but the Lakers won the game and Kobe had a nice one with 20 points – 12 in the 3rd. What made the 20 extra special is because many came against the man he considers the best defender he ever played against – Tony Allen, who connected on all 12 of his shots for 27 points!

Back to another great defender against Kobe, if you thought Metta’s ejection in 13 minutes was fast, during his stint in Italy last year, he was ejected in 1 minute after racking up 5 fouls and 1 scuffle….while wearing Panda shoes.