Most only remember Dikembe Mutombo as a shot-blocking genius. But, during the first half of his rookie season in 1991, Deke looked like he was going to be the next Patrick Ewing and not Mark Eaton. The rookie All-Star had a 27 and 17 performance in his second NBA game and eight 20 and 10 games in the first month of his career. He even exploded for a 39-point, 21-rebound performance during his rookie campaign, which put him on the radar of veteran superstars who wanted to challenge and/or embarrass him. And no veteran superstar enjoyed messing with popular rookies more than Michael Jordan.

During MJ’s first game against Deke and the Nuggets — during Mutombo’s red-hot first month — Jordan dropped 37 points with his final point coming off an eyes-closed free throw dedicated to the rookie.

The rookie didn’t do too bad either in the loss: 22 points (team high), 9 rebounds, 2 blocks, 2 steals and escaped getting dunked on by the man who loves dunking on big men Hoyas.

But, Deke could only escape from being on a Jordan poster for so long…

Speaking of memorable first meetings, as bad as Mutombo probably felt after MJ’s taunt, I’m sure he didn’t feel as bad as the little kid who was able to get right next to Jordan after the eyes-closed free throw and not get his autograph. 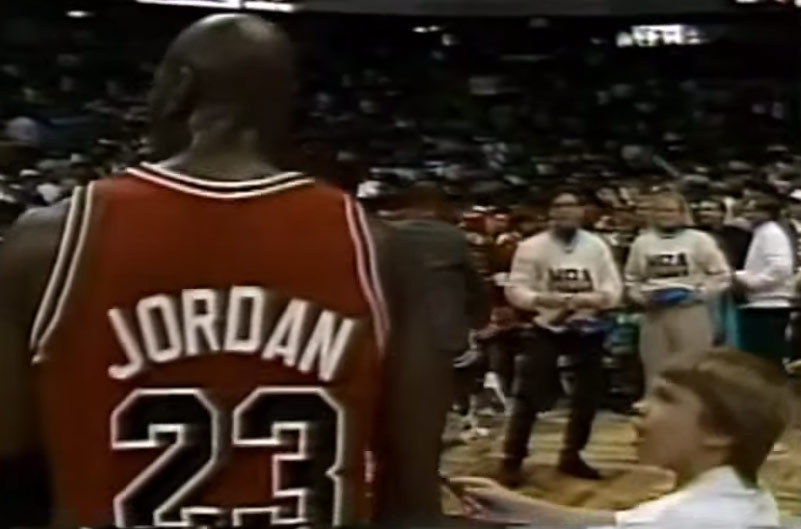 I know this is mean, but how funny would it have been if Mutombo gave the kid the finger wag after seeing him not get MJ’s signature.