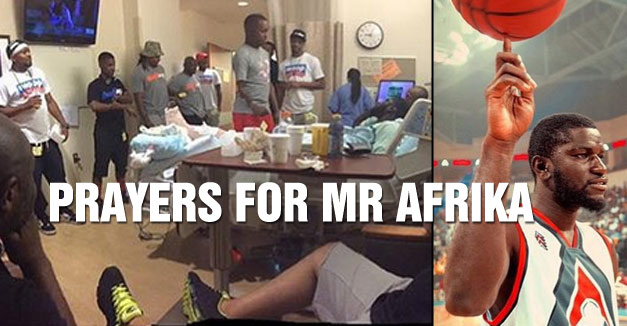 After covering the Ball Up Tour for the past few years and following the players from the team for the past 10-15 years, it surprised me ...(Read more)

After covering the Ball Up Tour for the past few years and following the players from the team for the past 10-15 years, it surprised me to realize that before 2 weekends ago, I have never had a conversation with Anthony Pimble bka high-flying Mr Afrika. I bumped into him outside a Houston arena where hundreds of people were lined up outside to watch the game and he brought me in the back and helped me get into contact with a few people I needed to speak to.  I remember thinking how nice he was and if you have ever seen him play and dunk on a defender then you know how mean and intimidating he can look.

After having such a great meeting with him 2 weeks ago, it made the news about him this weekend more devastating. During the Ball Up’s game in Chicago on Sunday, Afrika broke his leg in a similar way that Paul George did.  The game was called early and he was taken to the hospital.

His teammate Special FX posted an update later that night saying Afrika was in good spirits and the whole team was at the hospital cracking jokes and showing support for their brother.

Get well Anthony. Looking forward to seeing you again – on and off the court.