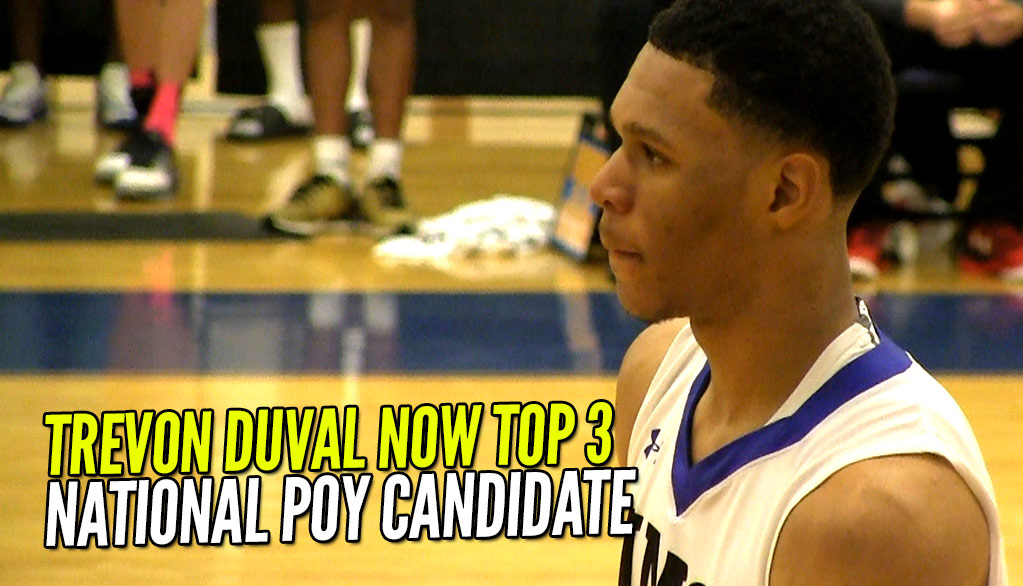 Michael Porter of FAB 50 No. 1 Nathan Hale (Seattle, Wash.) is still the consensus No. 1 candidate in the latest Mr. Basketball USA Tracker powered by ...(Read more)

Michael Porter of FAB 50 No. 1 Nathan Hale (Seattle, Wash.) is still the consensus No. 1 candidate in the latest Mr. Basketball USA Tracker powered by Ballislife.com, but two other special players are tracking upward.  Point guard Trevon Duval joins Porter as a unanimous selection among panel members.

There is not much suspense at the top of the updated 2016-17 Mr. Basketball USA Tracker powered by Ballislife.com. There is, however, some interesting developments as candidates position themselves for our annual All-American team.

Michael Porter Jr. of FAB 50 No. 1 Nathan Hale (Seattle, Wash.) continues to appear on every ballot of the  10-man Mr. Basketball USA Tracker Panel and was the first-place vote-getter on each ballot. With regards to Porter’s candidacy, it seems the only question remaining is will he collect every single first-place vote on each ballot throughout the entire season? The first player to do that in the 10-year history of the Mr. Basketball USA Tracker was Ben Simmons of Montverde Academy (Montverde, Fla.) during the 2014-15 season.

“He’s about as consensus a top pick there can be, based on what he did last summer on the EYBL circuit and what he’s done for Nathan Hale,” said panel member Frank Burlison of BurlisononBasketball.com. “Not only what he’s done in terms of his individual performances, but from the standpoint of winning. He’s helped a program that was nondescript last year to within a couple of week’s of a potential national championship.”

The only change among the top five candidates is the flip-flopping between point guard Trevon Duval of FAB 50 No. 6 IMG Academy (Brandenton, Fla.) and power forward Marvin Bagley III of FAB 50 No. 12 Sierra Canyon (Chatsworth, Calif.). In the last go-around, Bagley was the No. 3 candidate with 63 overall points while Duval was in fourth place with 53 points. In the latest  tracker, Bagley appeared on one additional ballot (9 up from 8) and gained an additional point (64), but Duval gained an additional 13 points to move ahead of the standout junior from Sierra Canyon by two points and into third place behind DeAndre Ayton of Hillcrest Academy (Phoenix, Ariz.).

Ayton’s candidacy has lost some steam as Duval’s has picked up. The Arizona-bound big man collected six second-place votes and two third-place in the previous tracker, but three less second-place votes and two additional third-place votes this time around. He also disappeared from one ballot, as Duval is now the only other candidate besides Porter to appear on all 10 ballots. The IMG standout averaged 16.2 ppg, 3.4 rpg, 7.7 apg, 2.9 spg and shot 54 percent from the field during the regular season for a team looking to win Dick’s Nationals for a shot at the mythical FAB 50 national title. Duval, who remains uncommitted for college, has seemingly ended the debate as to whom the nation’s top overall point guard is with one third-place vote, five fourth-place votes, three fifth-place votes and one for sixth-place.

“Duval is the consensus top point guard in the country,” Burlison said. “I personally thing (Trae) Young is, but Duval is explosive and has been on the radar for so long.”

Young, who is averaging well over 41 pointer per game for Norman North (Norman, Okla.), averaged 23.2 ppg, 7.1 apg, and 2.3 spg for EYBL champion Mokan Elite and is headed to Oklahoma, collected one second-place vote and collected 23 points while appearing on four ballots.

About Mr. Basketball USA Tracker Panel
Ballislife.com’s panel of 10 experts, which includes six McDonald’s All-American selection committee members, casts its vote for the top national player of the year candidates. Each panelist lists his top seven candidates regardless of class. The votes are then tabulated on a 10-point scoring system with a first-place vote equaling 10 points, a second-place vote earning nine points and down to four points for a seventh-place vote. The number in parenthesis refers to the numbers of ballots on which a player appeared and previous rankings refers to position in the previous tracker.