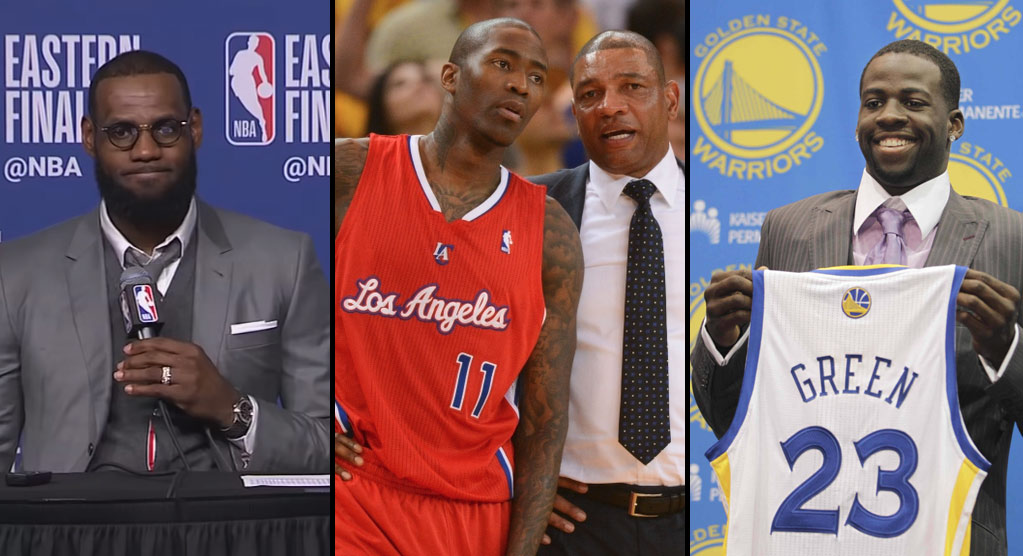 During a recent appearance on The Bill Simmons Podcast, former Cleveland Cavaliers general manager David Griffin shared a few great stories about LeBron James and called him a “computer on learning mode.”

“He’s so cerebral. We used to joke that he was a computer on learning mode. He’s such a savant, and he figures out the angles to such a huge degree that it’s not a surprise he’s figured to game the system a little bit.”

After losing Game 1 against Simmons’ favorite team on Sunday, LeBron was asked about a fourth quarter run by the Celtics. He responded by sounding like a “computer on learning mode.”

“What happened. The first possession we ran them down all the way to two on the shot clock. Marcus Morris missed the jumpshot, followed it up, they got a dunk. We came back down, we ran a set for Jordan Crawford, I mean Jordan Clarkson, and he came off and missed it. They rebounded it, and we came back on the defensive end and we got a stop. They took it out on the sideline. Jayson Tatum took the ball out, threw it to Marcus Smart in the short corner, he made a three. We come back down, missed another shot. Then Tatum came down and went 94 feet, did a Euro step and made a right-hand lay-up, timeout. There you go.”

My favorite part of his answer was his fumble on Jordan Clarkson’s name. He accidentally called him Jordan Crawford, the former Celtic who had the infamous dunk on LeBron at his Skills academy that Nike tried to keep secret by confiscating everyone’s video footage.

That Skills Academy is also the same one that Celtics’ Jayson Tatum and Terry Rozier once attended.

Anyways, the point of this post isn’t to celebrate highlights and current Celtics but to celebrate the cerebral beautiful minds of players like LeBron and (Celtic legend) Larry Bird, who once appeared on Bill Simmons’ podcast and discussed play-by-play details and thoughts about random games from almost four decades ago.

Here’s a few other of my favorite examples of players showing off their memory.

He’s currently playing for his 18th coach (Tom Thibodeau) and considering he’s the league’s Benjamin Button, I wouldn’t be surprised if he eventually has to name 20.

I also conducted an hour long interview with Crawford that season and he shared, in great detail, so many great stories, like going undefeated in summers with Michael Jordan, playing on Jay Z’s Rucker Park Dream Team and ending Steve Smith’s career.

I highly recommend you watch this video (and not just because I made it).

The casual basketball fan had no idea who Draymond Green was back in 2012, when the Golden State Warriors selected him with the 35th pick in the NBA Draft. Even hardcore basketball fans have no idea who some of the top 34 picks are. Remember Fab Melo, Arnett Moultrie, Jeff Taylor or Tomas Satoransky? You might not but Draymond does.

Here’s a video of him naming all 34 players selected before him during the stacked 2012 Draft that saw Charlotte draft Michael Kidd-Gilchrist with the No. 2 pick, ahead of Bradley Beal (3), Damian Lillard (6) and Andre Drummond (9).

Here we are talking about LeBron and the year 2014 again.

In a 2014 article by Brian Windhorst called ‘Total Recall: LeBron’s Mighty Wind,’ the keeper of all LeBron information shared a few great stories about LeBron’s memory. Here’s an amusing snippet from the article.

Playing video games with LeBron James is so annoying.

“When we were growing up we used to play this fighting game on the Sega Genesis called Shaq Fu,” says Brandon Weems, James’ lifelong friend. “LeBron was the only one who had memorized all the moves and so he’d win every time. We all thought he definitely was cheating.”

“When you play Madden with him now you have to be careful which teams you take, because he will know what your game plans were in the past when you’ve played with him and he’ll pick the opposing team knowing what plays you want to run,” says Weems, now an assistant basketball coach at Oakland University.

“You better save your favorite play, too, because he’ll remember what you ran before in situations and be ready for it. Your only hope is to save it until the end and try to surprise him with it.”

And this is what LeBron had to say about his photographic memory.

“I can usually remember plays in situations a couple of years back — quite a few years back sometimes,” James says. “I’m able to calibrate them throughout a game to the situation I’m in, to know who has it going on our team, what position to put him in.

“I’m lucky to have a photographic memory,” he will add, “and to have learned how to work with it.”

Seven-time NBA All-Star Jerry Lucas is mostly known to hoop fans as a NBA Champion or a member of the NBA 50 team. But to many non-hoop fans, he’s known as Dr. Memory. After his impressive basketball career, Lucas went on to write a bunch of books and conduct seminars about memory.

There’s no video evidence of this but there’s a story about Lucas memorizing 50 pages from a Manhattan phone book! Before cell phones became a part of our lives, I probably had about 10 phone numbers memorized. Now I can only tell you three: mine, my wife’s number and one of my daughters (sorry to the other one).