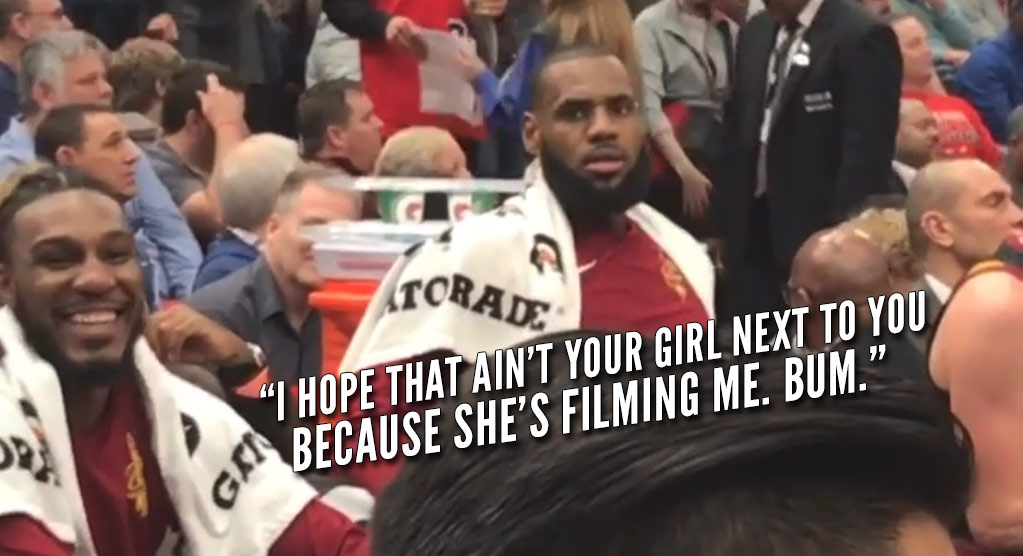 Bum seems to be the go to put down by the King. President Trump knows this and on Monday, Abdul Razick aka “Chicago’s Heckler,” found that ...(Read more)

Bum seems to be the go to put down by the King. President Trump knows this and on Monday, Abdul Razick aka “Chicago’s Heckler,” found that out when he decided to heckle James near the end of the Cavs’ 23-point beat down on the Bulls.

“Stop crying!” Shouted Razick. “You too grown for that. Where your hairline at fam? You lost Kyrie. You lost D. Rose? You can’t keep point guards for your life.”

LeBron’s response was, “I hope that ain’t your girl next to you because she’s filming me. Bum.”

The comeback was amusing but what made the video so great was the reaction by Jae “I’ve missed 22 of my last 30 three-point attempts” Crowder…and the hair cut by the Asian guy next to Razick.

I personally love when players and fans talk trash to each other, as long as they don’t cross the line of decency. An example of an awesome heckler is 90’s Washington Bullets fan Robin Ficker. He was so well known, Charles Barkley bought him a plane ticket and a seat behind the Chicago Bulls bench during a NBA Finals game in 1993; The Bulls had him removed in the first quarter.

Another example of acceptable trash talk directed at a player is when this self-made billionaire told LeBron to “suck it up.”

An example of an out-of-line heckler is the infamous Warriors fan who yelled, “LeBron, how does it feel to be a pussy ass bitch?” after Game 2 of the 2015 NBA Finals.

If you think that woman has anger issues, she’s Ellen DeGeneres compared to the psycho lady who gave Joakim Noah the finger back in 2013. Check out this video about her insane past.

The other type of heckler I can’t stand is the one that shuts up and plays innocent when confronted. Remember the guy who was afraid of Steph Curry? AFRAID OF STEPH CURRY?!