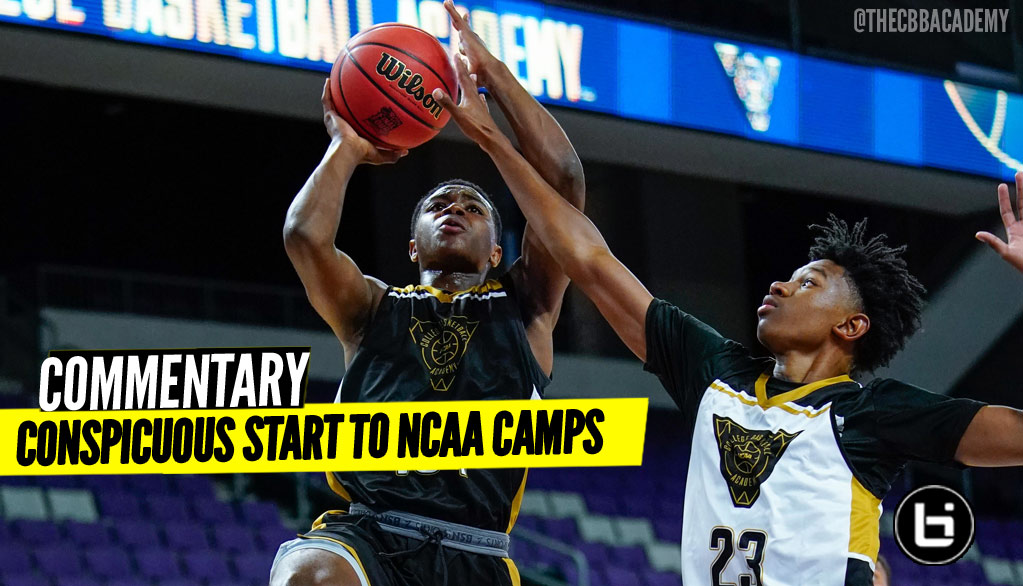 The NCAA’s overhaul of its college basketball recruiting calendar was center pieced on four regional academies. The first time events did showcase some deserving potential recruits in front of college coaches, but the overall product is a work in progress and a far cry from delivering to players and coaches the product it replaced.

The NCAA’s overhaul of its college basketball recruiting calendar was center pieced on four regional academies designed to place up to 2,400 participants in front of college coaches. The four academies did showcase some deserving potential recruits in front of those coaches, but the player personnel aspect left something to be desired. The overall product is a work in progress, but a far cry from delivering to players and coaches the product it replaced.

Grassroots coaches and middlemen are often lumped together whenever a negative issue or incident involving youth basketball is publicized. The grassroots basketball community, however, has evolved over the years and the one thing it’s proven to be is resilient.

The reality is there are some bad apples that occupy the grassroots basketball space, but not to the extent that is often portrayed by those that don’t spend quality time observing the myriad of basketball events on the spring and summer calendar, but rather make sweeping characterizations whenever a big story hits. The NCAA Recruiting calendar was changed as a swift response to the FBI bribery and corruption recruiting scandal and the one event that wasn’t altered, but actually created, was the NCAA College Basketball Academies, which took place on college campuses in Phoenix, Houston, Champaign, Ill. and Storrs, Conn.
From the information Ballislife gathered at the USA Basketball mini-camp, in Phoenix and from an article by the New York Times’ Billy Witz, there are two certainties with regards to the NCAA Academies and the key stakeholders in grassroots basketball.

Neither group is going anywhere.

“We’re not going back to the way it used to be,” NCAA Vice President for Men’s Basketball Dan Gavitt told the New York Times. “That ship has sailed.”

The stakeholders incorporated by the NCAA to assist with the new recruiting calendar, including the NCAA Academies, were the NBPA, USA Basketball, the National Association of Basketball Coaches and the National Federation of State High School Associations (NFHS). While those organizations serve important roles in youth basketball development, members of those organizations typically don’t cultivate relationships with potential college-bound players first. The group that typically does develop the first and strongest bond is club basketball coaches, and those relationships will remain tight regardless of how the NCAA recruiting calendar shapes up.

These club coaches with recruitable players and grassroots event operators, especially those run independent of shoe companies, are keenly aware that the NCAA recruiting calendar was designed to lessen their influence, and in many instances, shrink their wallets in the process. They don’t see the reduction of three live July weekends down to one, the creation of the NCAA Academies, and Gavitt’s comments to the New York Times in any other fashion.
Since the camps are here to stay, there are two things that can happen: the travel ball coaches can support the event from the player personnel perspective to benefit their players’ recruitment or decide to stick their top players together with their team and play in a “dead” event (meaning not sanctioned for college coaches to attend). As was shown last week at the Las Vegas Big Time Tournament and other team-oriented events, there is a market and existing platforms for grassroots teams while a sanctioned event is concurrently being held the final week of July.

The reality is, some of the best events in grassroots history have taken place in the dead period, the majority of travel teams don’t play in front of college coaches in a typical July tournament the size of ones you’ll find in Las Vegas and young players still want to play in Las Vegas in July. Current travel ball players grew up watching elite players in years past do it and aspire do the same. That part of grassroots culture has been in place since the 1980s and won’t easily change.

The NCAA College Basketball Academy held at Grand Canyon University was generally well-received by the attending media and parents in terms of organization, curriculum and game play, but fell well short in the areas of scheduling and player personnel if this is to be the NCAA’s center piece event moving forward.

Here is what some college coaches (who commented on the event under the condition of anonymity) said:

“I don’t need three hours of drills,” said a D1 low major assistant from the Midwest. “I’d like to see it, but would rather see more team stuff.”

“It’s like looking for a diamond in the rough…you don’t know who’s coming and who’s going to be there,” said one D1 high major assistant from the West. “I know some kids wanted to go, but couldn’t for whatever reason.”

“There’s maybe 10 out of 300 that could play for our program,” said one head coach from the West Coast Conference. “And nobody (from our conference) is recruiting Florida (to that extent).”

Like any other basketball event, the first one is always the hardest to make successful. The NCAA has the resources (based on what was said among the media upwards of $10 million dollars was spent at the four sites) and the connections to make its event better. If it was conducted in addition to adding back one of the July live weeks to play in travel team-based events, it would need fine-tuning. But since the events was ran as a replacement to late July travel team-based events, it needs significant overall improvement. This sentiment was echoed by an assistant from the Big West who asked if what he saw in Phoenix satisfactorily replaced what he would have saw in Vegas had the recruiting calendar had not changed.

“No, it’s not (replacing it). In the games, they are running some stuff (plays), but there are not enough good players. It can only get better.”

Game Location: In Phoenix, one game was played at Grand Canyon’s 7,000-seat arena and up to four games simultaneously played at Canyon Activity Center, an excellent facility with nine courts. There shouldn’t have been any games at the main arena at GCU or any of the four sites. Logistically it didn’t make sense for the players, the parents, media or college coaches because in 100 plus degree heat, it was too far a walk and to drive back and forth between sessions (and potentially missing important game action) wouldn’t have been wise. One D1 assistant did not like the fact is was an obvious recruiting tool for GCU, whether it was intended to be or not.

Team Selection: As stated earlier, the participants played hard and ran some of the sets coaches attempted to implement. However, for coaches it wasn’t hard to figure out among the roughly 150 participants in each of the two Phoenix sessions, which two or three teams had the priority recruits and/or best talent. The teams had in most instances seven or eight players and some of them had younger players or primarily 2020 (senior-to-be) prospects. The amount of teams should have been reduced with players from various classes equally distributed, as much as possible, to ensure college coaches viewed various teams. In a couple of instances, 90-95 percent of the coaches at the Canyon Activity Center were evaluating a single game. From a perception standpoint, that was poor and defeated the purpose of the NCAA covering the cost of participants and a guardian to attend.

Player Personnel: In Phoenix, the top-tier prospects and most productive ones greatly benefitted from a college recruitment standpoint since that group was small. From the standpoint of a D1 college coach, it is difficult to evaluate a quality prospect playing in a game with a bunch of non D1 players. It increases the chances of a mis-evaluation. In terms of numbers, the NCAA announced it would allow up to 2,400 prospects to participate, meaning 600 at each site. In Phoenix, it turned out to be a good thing only 150 kids participated in each session because with 22 teams, it was already difficult to evaluate each one within the two and a half days of game play. Plus, with eight or nine courts running at once, the facility would have resembled the cluster often seen at the events the NCAA and others want to diminish in terms of not being a great evaluative setting and balls flying around from one court to another.

Player Selection Process: This is the area that needs the biggest improvement. In a nutshell, the NCAA dropped the ball on player selection if they at all cared about replacing the viewing opportunities college coaches lost with the new calendar. In its defense, the camps had to be constructed with a time constraint that wont be there in the future, but simply not enough players and parents knew about how the process worked. With the amount of money that was spent on conducting the camp, the deadline to register or be nominated for the NCAA Academies was an artificial one. A deadline only matters if an event has a waiting list or if the budget is small enough that every day matters with regards to pricing flights. In both matters, that wasn’t the case. It was apparent by the talent level that the self-domination process must be re-examined and the process of a college coaching staff nominating talent was a bad one. In many cases, college coaches rely on a trusted scout to come up with recruiting targets and rely on travel ball coaches to foster a relationship with those targeted players. Having a respected national scout heavily involved in the selection process along with regional scouts (without any strong ties to a shoe company or travel ball team) would be wise for the NCAA. After all, travel ball coaches’ trust level in sending players in their program to these academies would increase if scouts without any ties, rather than those involved in the current setup, were involved in the selection process. After all, grassroots coaches are likely the first person the family of a prospect will consult regarding the decision to attend the NCAA Academies in the first place.

“I think the camps have a chance to be successful – which everyone wants, from the coaches to the kids to the scouts – but it will take some adjustments to get there,” said 247Sports.com National Recruiting Analyst Josh Gershon. “I don’t know a single college coach who was involved with the nominations. In fact I don’t a single person involved with the nominations. A lot of talented West Coast kids who were deserving of the opportunity were completely passed over. In order for these camps to work, the NCAA has to find a much better way of creating a pecking order of college prospects in each region.”