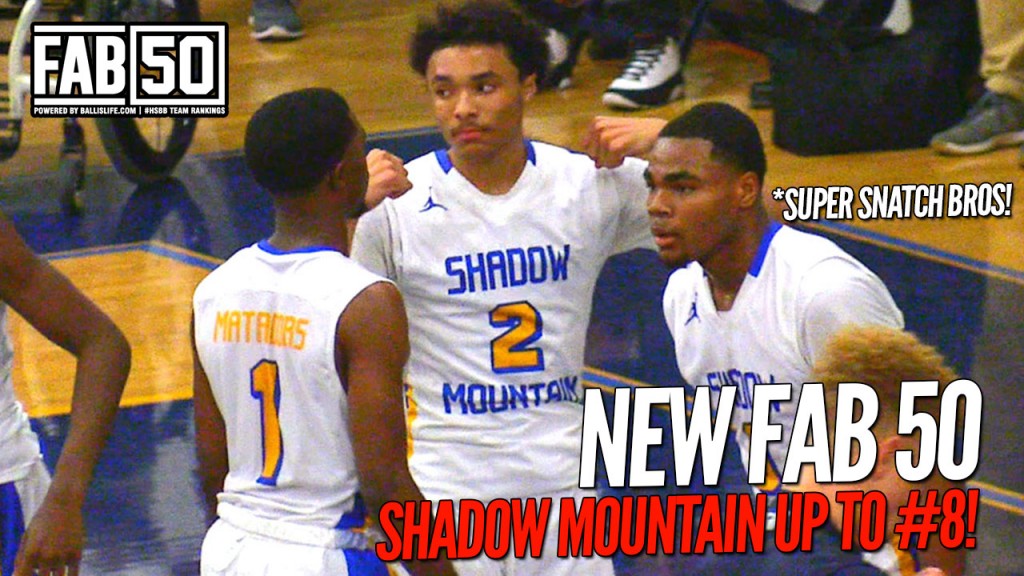 Results of showcase and holiday tournaments lead to eight newcomers in the second update of our national rankings. The second edition of the 2017-18 FAB 50 National ...(Read more)

Results of showcase and holiday tournaments lead to eight newcomers in the second update of our national rankings. The second edition of the 2017-18 FAB 50 National Team Rankings powered by Ballislife.com shows three newcomers to the Top 10: Shadow Mountain of Arizona, Simeon of Illinois and Archbishop Malloy of New York. Expect more movement heading into 2018 as big-time holiday tournaments get under way this week.

Every state is full bore into the 2017-18 season and currently the nation’s best teams are testing their wits against each other at holiday tournaments held across the country. The results that transpire over the next two weeks will bring plenty of change to the first FAB 50 National Team Rankings powered by Ballislife.com of 2018.

The nation’s top-ranked team, No. 1 Montverde Academy currently is playing at the Iolani Classic after a successful trip to China where the Eagles easily captured the International Youth Basketball Spectacular with a 85-50 win over Providence Day (Charlotte, N.C.) on December 9. Four other FAB 50 ranked teams join Montverde in Hawaii, including No. 32 Greensboro Day (Charlotte, N.C.) vs. No. 46 Bishop O’Dowd (Oakland, Calif.) facing off in an attractive quarterfinal game on Monday evening. The other FAB 50 ranked clubs (besides Montverde Academy) advancing to the quarterfinals are No. 23 Jefferson (Portland, Ore.) and No. 33 Rainier Beach (Seattle, Wash.).

The prestigious City of Palms Classic in Ft. Myers, Fla. got under way Monday and we already know No. 5 Hudson Catholic (Jersey City, N.J.) downed preseason No. 8 Webster Groves (Mo.), 84-52, in Monday first round action. This is the Webster Groves team that fell out of the FAB 50 this week after losing to No. 2 Memphis East (Memphis, Tenn.) on national television, 80-45, and to regionally-ranked Fern Creek (Louisville, Ky.) 58-40 at the Midwest Showdown Shootout that the Statesmen hosted over the weekend. Webster Groves has struggled without injured point guard Courtney Ramey, who will miss the entire City of Palms Tournament but could be back in action in a couple of weeks.

The Webster Groves-Fern Creek result helped Trinity (Louisville, Ky.) jump up 14 spots in this week’s FAB 50 to No. 31, as the Shamrocks defeated Fern Creek, 76-67. A second Kentucky team is one of the eight newcomers this week, as Covington Catholic (Park Hills, Ky.) checks in at No. 37 after knocking off previous N0. 14 Moeller (Cincinnati, Ohio) 58-53. As for Webster Groves, the team remains of the bubble because of its difficult schedule and the ability to bounce back with Ramey in the lineup. Webster Groves will also appear on the Ballislife HS Basketball Weekly Showcase when it faces Kirkwood (Mo.) at home on February 23 with Ramey hopefully in its lineup.

The highest-ranked newcomer is No. 26 Oak Ridge (Orlando, Fla.), which has only lost to fast-rising DeMatha Catholic (Hyattsville, Md.), 86-67, at the National High School Hoopfest the Stags hosted the weekend of December 9-10. Coach Steve Reece’s club bounced back the next night to down WCAC power and previous No. 12 Paul VI (Fairfax, Va.), 73-70. DeMatha is another club that will be featured on the Ballislife HS Basketball Weekly Showcase.

Oak Ridge was going to be a cinch preseason FAB 50 club before it was learned power forward Emmitt Williams was arrested October 18 on a sexual assault accusation. By the time Williams, 19, played his first game of the season on December 2, he still hadn’t been formally charged, according to a report in the Orlando Sentinel. Reece told the newspaper the Orange County School District cleared him to play and Oak Ridge is looking quite formidable with Williams, Texas A & M recruit Antwan Jones returning from injury and junior leaper Niven Glover easing into the lineup.

Another quality tournament getting under way this week is the Tarkanian Classic in Las Vegas, with the Platinum Division features FAB 50 No. 24 Clark (Las Vegas) and No. 43 Rancho Christian (Temecula, Calif.). The event is hosted by Bishop Gorman (Las Vegas, Nev.) and also features another club that opened up in the FAB 50: Morgan Park (Chicago, Ill.).

Five games will be broadcast by Ballislife from the Tarkanian Classic, including Morgan Park’s opening round game versus bubble club and unbeaten Salesian (Richmond, Calif.) on December 21 at 12 am ET/December 20 9 pm PT (CLICK HERE for broadcast link and reminder). The game features a point guard matchup featuring Ayo Dosumnu of Morgan Park (bound for Illinois) and James Akinjo of Salesian (bound for UConn.). Morgan Park could face Rancho Christian in the second round if it hands Salesian its first loss of the season, while Clark opens on the other side of the bracket with state-ranked Pasadena (Calif.).

CLICK HERE to see the full slate of games scheduled to be broadcast by Ballislife from the Tarkanian Classic.