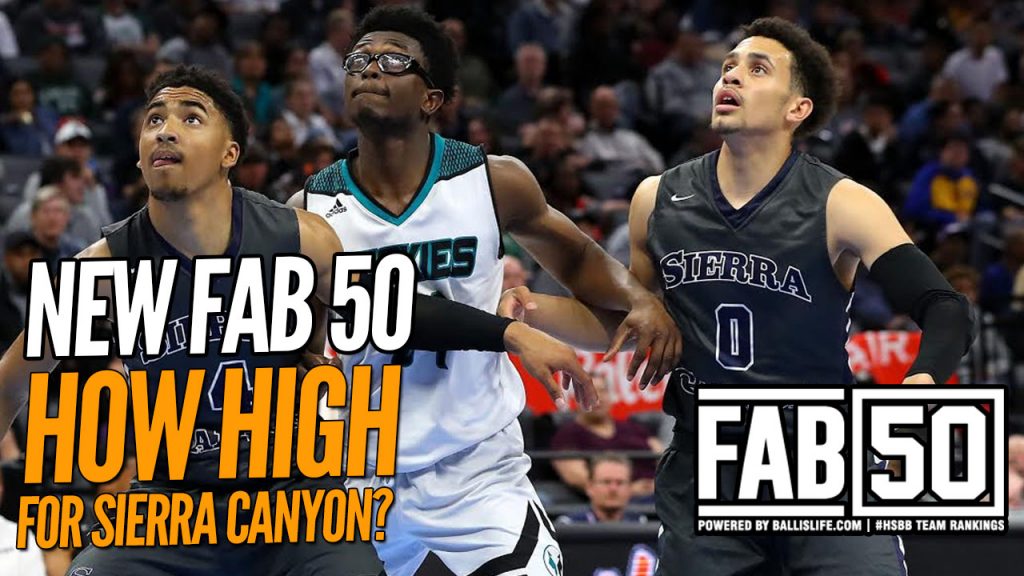 The fifteenth edition of the FAB 50 National Team Rankings powered by Ballislife.com for the 2017-18 season sees some movement as state champions are crowned in New ...(Read more)

The fifteenth edition of the FAB 50 National Team Rankings powered by Ballislife.com for the 2017-18 season sees some movement as state champions are crowned in New York, Ohio, Indiana, Michigan and California. New York Federation Class AA champion Archbishop Stepinac (White Plains, N.Y.), moves up the most this week to No. 27 after knocking off previous No. 15 Long Island Lutheran (Glen Head, N.Y.) in controversial fashion on its way to the TOC crown. Although Stepinac moved up, there seems to be no winner from the nature of the results at the New York Federation Tournament. Pennsylvania is still going after snow delayed the PIAA State Basketball Championships. The results of games involving No. 10 Imhotep Charter (Philadelphia, Pa.) and the eight teams set to play at GEICO Nationals will affect next week’s final rankings.

State championships in many big states were crowned over the weekend, but there was only one game that caused big movement in the latest FAB 50 National Team Rankings powered by Ballislife.com .

Unfortunately, the one result where the lower ranked FAB 50 team defeated the higher ranked one was a case of adults affecting on-court results, which matter most in our rankings…and always will.

How those results play out is an entirely different matter.

Lutheran’s coaching staff was going to set up a play in an attempt to take the lead or potentially win the game, but scorekeepers told the referees Long Island Lutheran was out of timeouts and the NYSAIS Champions were assesses a technical foul. Coach John Buck and his coaching staff argued it was the team’s fifth timeout, and not its sixth, as the scorer’s table and game officials claimed.

After the game, Buck and his staff reviewed the game film and filed a protest with New York Federation tournament officials the next morning, insisting the last timeout was indeed Lutheran’s fifth. Buck felt the game should have resumed with 8.3 seconds remaining, the game tied, and his team in possession of the ball. Tournament officials admitted to the clerical error, but Lutheran’s official protest was rejected after a morning meeting.

“My interpretation is that we can’t overturn a clerical mistake,” NYSAIS tournament director Jenny Smith told The Journal News.

Later that evening, Stepinac played eight-loss and unranked PSAL Champion South Shore (Brooklyn, N.Y.) in the federation title game and came away with a 76-72 victory to claim the 2018 NY TOC crown. Obviously that championship game and result was overshadowed by what transpired in the finals seconds of the Lutheran-Stepinac semifinal contest.

In 30 years of conducting weekly high school basketball rankings, we’ve learned a vast majority of the controversies surrounding ranked teams are created by adults and that most of them are clearly not intended to hurt the kids. We understand some can hurt kids as seems to be the case this year at the Feds tournament in New York. Over that time, we’ve also learned the results are the most important factor in our FAB 50 and that we can’t control how the results play out. Our primary job is to interpret them as best we can, while evaluating as many teams and players as possible.

We’ve seen eligibility issues and disputed results affect our rankings, and we try our best to make sense of them. In this case, Stepinac still had to win the title game to remain FAB 50 ranked which it did despite the distraction. Had it lost, the Crusaders would have likely fell out of the rankings while Long Island Lutheran remained. It’s not so much that Long Island Lutheran would have “deserved” it based on what transpired in the semifinal game, but based on its entire body of work.

Buck’s club owns an earlier win over Stepinac, plus victories over two other state champions — No. 15 Cox Mill (Concord, N.C.) and No. 16 Archbishop Moeller (Cincinnati, Ohio). The game results of the New York Federation TOC stands, as Lutheran falls 15 spots this week while Stepinac moves up 16 spots in the FAB 50.

We’ll never know how the results of the last 8.3 seconds would have transpired if replayed, but there is no way we could drop Lutheran any more than we decided to this week. On the other hand, Stepinac is the official federation champions and will be graded accordingly. Keep in mind, there is still more results that week that could affect where both clubs land in the final rankings next week.

The PIAA State Basketball Championships in Pennsylvania were delayed because of snow, so the fate of two-loss Imhotep Charter (Philadelphia, Pa.) in the Class 4A final won’t be reflected until the final rankings next week.

One team that Long Island Lutheran defeated during the season helped the Crusaders by wrapping up the Ohio Division I state crown over the weekend. That team is Archbishop Moeller (Cincinnati, Ohio), which erased the memory of last year’s state title game loss with a 83-65 victory over bubble club Solon (Solon, Ohio) in front of 9,226 fans.

The Crusaders’ Jeremiah Davenport, a senior guard, led the way with 22 points, eight rebounds and five assists, as Moeller shot 71 percent from the field and scored 64 points in the paint in the dominant win. Moeller, which has won four state crowns, ended its season with 20 consecutive wins and only lost one game in-state in the past two seasons. Its other two losses this season were to state champ and No. 29 Covington Catholic (Park Hills, Ky.) and Imhotep Charter, so the fate for Long Island Lutheran and Moeller is not sealed just yet from a rankings perspective.

In Indiana, Warren Central (Indianapolis, Ind.) completed a 32-0 season by capturing the Class 4A state title with a come-from-behind 54-48 victory over MIC rival Carmel (Carmel, Ind.). Warren Central was fortunate to trail only 22-14 at halftime after going over 11 minutes without scoring a point in the first half. Warren Central eventually took the lead at 39-37 on a 3-pointer by Dean Tate and never looked back. Tate finished with 22 points for a program that became the first Indiana boys basketball team to finish undefeated since 2008-09 and the first Class 4A program to win a boys and girls state crown in the same season.

Although Warren Central stayed put in this week’s FAB 50, unbeaten teams will get a hard look to move up in the final rankings.

Sierra Canyon trailed in the third period, but closed the game on a 28-10 run over the final 12 minutes to win its first-ever state open crown. Scottie Pippen Jr., the son of the NBA Hall of Famer, led the way down the stretch. He finished with 16 second half points in a 21-point, six-rebound, four-assist, four-steal performance.

Although Sierra Canyon won the prestigious open crown, it won’t finish as high in the FAB 50 as the previous five CIF Open Division state champions. The Trailblazers must remain behind No. 17 Bishop Gorman (Las Vegas, Nev.) and No. 8 Shadow Mountain (Phoenix, Ariz.) in the final rankings. Sierra Canyon lost to both clubs in overtime and Shadow Mountain is one of eight teams participating at GEICO Nationals this week at Christ the King (Middle Village, N.Y.).

The quarterfinals begin Thursday, as Shadow Mountain takes on FAB 50 No. 3 University School (Ft. Lauderdale, Fla.). FAB 50 No. 1 Montverde Academy (Montverde, Fla.) will attempt to capture the event crown for the fourth time in six seasons.