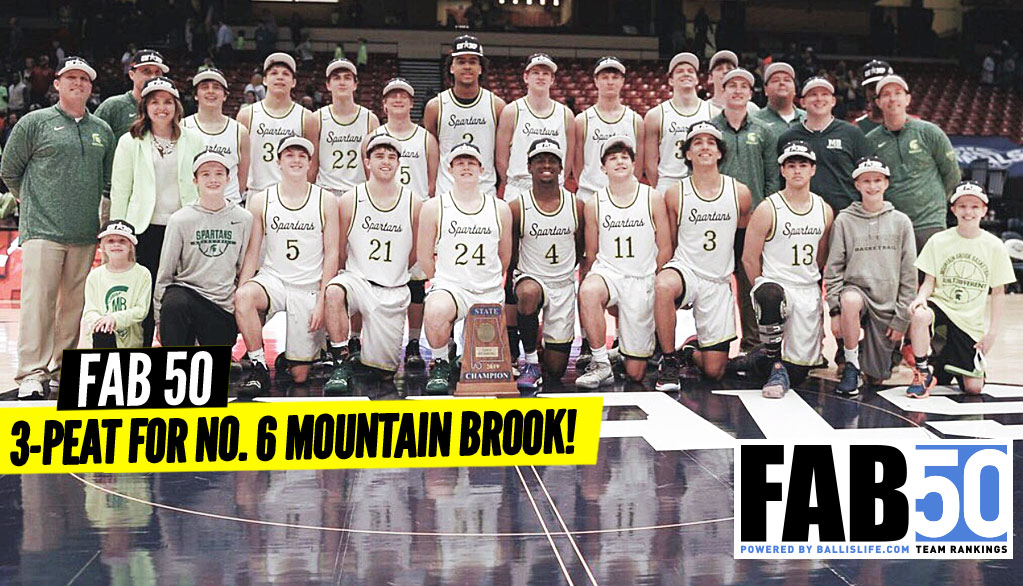 No. 2 McEachern (Powder Springs, Ga.) secured its invite to GEICO Nationals in New York by winning the GHSA Class AAAAAAA title. The GEICO Nationals field has been announced and the event has its best overall field in its 11-year history, but will the Indians be at full strength?

More state champions are crowned, including No. 2 McEachern (Powder Springs, Ga.), which secured its invite to GEICO Nationals in New York by winning the GHSA Class AAAAAAA title. The GEICO Nationals field has been announced and the event has its best overall field in its 11-year history. There are seven newcomers to this week’s FAB 50 National Rankings powered by Ballislife.com, including four teams that wrapped up state championships last week.

As the season begins to wind down, more state champions have been crowned across the country and two that won championships last week are not yet done with their season. That’s because both teams have been invited to GIECO High School Nationals, set for April 4-6 at Christ the King (Middle Village, N.Y.) with all seven games nationally televised by ESPN.

FAB 50 No. 2 McEachern (Powder Springs, Ga.) won the GHSA Class AAAAAAA state crown with a 62-54 victory over No. 45 Meadowcreek (Norcross, Ga.) to keep its unbeaten season alive. Mr. Basketball USA candidate Sharife Cooper once again led the way for the Indians, scoring 20 points and dishing out four assists. Also having a big game was Auburn-bound Isaac Okoro, who helped the Indians win their first ever state crown with 16 points, four rebounds and four assists.

McEachern played a murderous schedule, went through unscathed and will go down as one of the best teams in GHSA history. Should it win GEICO Nationals, the Indians will likely rival 1979 Southwest (Macon, Ga.) as the GHSA’s best team ever. Southwest was crowned national champions by Basketball Weekly and the National Sports News Service, which was morphed into the FAB 50 19 years ago.

The other team securing a berth to the end-of-season event was No. 10 University School (Fort Lauderdale, Fla.), which clinched a second consecutive Class 5A state crown on Thursday with a 72-46 victory over Andrew Jackson (Jacksonville, Fla.). The Sharks, which lost to eventual FAB 50 champ Montverde Academy (Montverde, Fla.) in last year’s GIECO final, were led by Jace Howard with 17 points, while standout junior Scottie Barnes and Roger McFarlane had 13 points each. Coach Jimmy Carr’s team was able to easily roll to another title despite Duke-bound Vernon Carey Jr. missing the game because of an ankle injury. He expects to play at GEICO Nationals.

Four teams that wrapped up state titles last week move into this week’s FAB 50, including No. 46 Booker T. Washington (Tulsa, Okla.) which captured the OSSAA Class 6A state crown with a 82-70 win over Putnam City North (Oklahoma City, Okla.). Washington captured its first state crown since 2011 and its state-record 16th overall behind a terrific 42-point performance from junior guard and Tulsa commit Trey Phipps.

With McEachern and University School wrapping up their state championships, state champion and No. 11 Shadow Mountain (Phoenix, Ariz.) and state champion and No. 27 Bishop Gorman (Las Vegas, Nev.) were the bubble teams not selected. The field is completed by six independent programs. The top four seeds in the tournament are also the teams that have been the top four in our rankings for the past month: No. 1 La Lumiere (La Porte, Ind.), No. 2 McEachern, No. 3 Montverde Academy, and No. 4 IMG Academy (Bradenton, Fla.). The No. 5 seed is Oak Hill Academy (Mouth of Wilson, Va.), which checks in at No. 18 in the FAB 50. The No. 6 seed is Wasatch Academy (Mt. Pleasant, Utah), which is No. 13 in the FAB 50 and owns a win over No. 7 seed Sunrise Christian Academy (Bel Aire, Kan.), which is No. 9 in the FAB 50. The field is rounded out by No. 8 seed University School, which is No. 10 in the FAB 50.

Below is the television schedule for the first round (April 4th, ESPNU):

Quick Analysis: This is the event’s strongest field, and if it has its full lineup, McEachern has the best shot of any pubic school to capture the GEICO Nationals title in the event’s history. Usually there is a team selected ranked quite low in the FAB 50 or even unranked, but with Oak Hill Academy coming in the lowest ranked at No. 18 after an up-and-down regular season, it has a chance to make a splash versus No. 4 IMG Academy. The two teams played during the regular season and Oak Hill Academy kept it close despite Mr. Basketball USA candidate Cole Anthony not suiting up. Should be be at 100 percent in New York, Oak Hill has got to like its chances to pull off an upset.

A matchup between Carey and Washington-bound Isaiah Stewart highlight the No. 1 vs No. 8 game. University, similar to Oak Hill Academy, has had an inconsistent regular season, but the Sharks have big game experience and could give the top-rated club all it could handle. Wasatch Academy will have to play a complete game versus Montverde Academy, which closed its season strong and will be confident coming in. A couple of shaky wins and a loss to No. 40 Vashon (St. Louis, Mo.) is the reason why Wasatch is currently ranked behind No. 7 seed Sunrise Christian Academy despite owning a regular season win over the Kansas independent school power. Sunrise Christian will attempt to utilize its size against McEachern, which it lost to in overtime during the regular season. Sunrise Christian lost to top-ranked La Lumiere, 65-53, while the Lakers beat Wasatch Academy by a single point. On the other hand, Wasatch Academy was completely blown out by No. 39 Rancho Christian (Temecula, Calif.).

According to a recent report by USA Today’s Jason Jordan, some of McEachern’s key performers, including Cooper and Okoro, are reportedly skipping the event. Should La Lumiere win three games in New York, it will almost certainly be crowned FAB 50 champions. Should La Lu lose and another team win the event (besides McEachern), its resume will have to be judged against a McEachern team with one loss or an unbeaten one that perhaps decides it will not participate in the event.

Will continue to break down this latest development and the on-court results leading up to the end-of-season event.