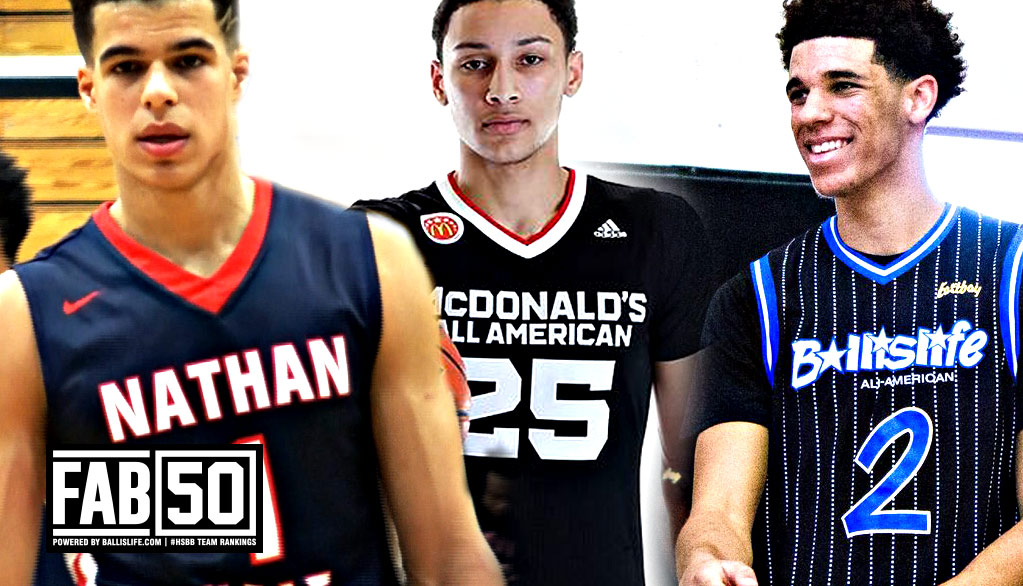 The seventh edition of the FAB 50 National Team Rankings powered by Ballislife.com for the 2017-18 season shows two new teams, but we ALMOST had a MAJOR shakeup, ...(Read more)

The seventh edition of the FAB 50 National Team Rankings powered by Ballislife.com for the 2017-18 season shows two new teams, but we ALMOST had a MAJOR shakeup, as Findlay Prep (Henderson, Nev.) lost to preseason and current No. 1 Montverde Academy (Montverde, Fla.) at the buzzer. Despite the loss, the Pilots still move up in the rankings after handing previous No. 6 Shadow Mountain (Phoenix, Ariz.) its first loss of the season.

Only two teams this week had losses that knocked them out of the FAB 50 National Team Rankings powered by Ballislife.com. That made room for traditional Minnesota power Hopkins (Minnetonka, Minn.) and Trinity Episcopal (Richmond, Va.) to move into the FAB 50 and No. 47 and No. 50, respectively. Hopkins has only lost to No. 45 Cretin-Derham Hall (St. Paul, Minn.) 86-73 in the Royals’ first game of the season. The two teams could meet again in the Class 4A playoffs.

Trinity Episcopal has only lost to top-ranked Montverde Academy (Montverde, Fla.) and to Blue Ridge (St. George, Va.). Coach Richard Hamlin’s club is the last team in after opening at No. 29 in the preseason FAB 50 but going 1-2 in its first three games.

Speaking of Montverde Academy, there was nearly a big shakeup at the top of the rankings, but the Eagles were able to hold on to the top spot and win their own Montverde Academy Invitational Tournament thanks to a dramatic buzzer-beating 3-pointer by Mike Devoe that gave the host school a 69-67 win over previous No. 8 Findlay Prep (Henderson, Nev.). The winning shot was off an inbounds play where Devoe let Spencer Washington fly by him on a defensive rotation to the corner, calmly set his feet and knocked down the game-winning shot as the home crowd stormed the court in a frenzied state.

With the win, the Eagles maintained their preseason No. 1 position and unbeaten mark. Devoe finished the MAIT championship game with 26 points and two steals, while Mr. Basketball USA candidate R.J. Barrett had 22 points and 15 rebounds while averaging 24 ppg in three MAIT games.

Findlay Prep actually moves up in the rankings after the tournament, as it handed previous No. 6 Shadow Mountain (Phoenix, Ariz.) its first loss of the season with a 83-74 semifinal win. Texas Tech-bound Kyler Edwards netted 19 points in the Pilots’ big win. Memphis East (Memphis, Tenn.)  moved up a spot to replace Shadow Mountain at No. 6, as Penny Hardaway’s team owns a win over Findlay Prep. Memphis East has a split with No. 5 Simeon (Chicago, Ill.), lost to No. 4 McEachern (Powder Springs, Ga.) and to No. 3 University School (Ft. Lauderdale, Fla.).  The third loss for the Pilots came against No. 42 IMG Academy (Bradenton, Fla.) when that club still had Kansas’ Silvio De Souza in its lineup.

Roselle Catholic will look to bounce back from the Paul VI loss with two big games this week you can catch on the Ballislife HS Basketball Weekly Showcase. On January 31, the Lions take on talented and FAB 50 bubble club Ranney School (Tinton Falls, N.J.) at 7:30 pm (ET) in the premier game of the Jersey Shore Challenge at Brookdale Community College (Lincroft, NJ). Three nights later on February 3, Roselle Catholic takes on rival Patrick School (Elizabeth, N.J.) at 5:15 pm (ET) in the showcase game of the Tom Richel Memorial Hoopfest at Roselle.

On January 20, Roselle Catholic defeated Patrick School behind a big performance from McDonald’s All-American Naz Reid after the defending New Jersey TOC champions beat Roselle Catholic four times last season. Make sure to check the Ballislife Show Page to get a reminder link for both games and for other game updates.