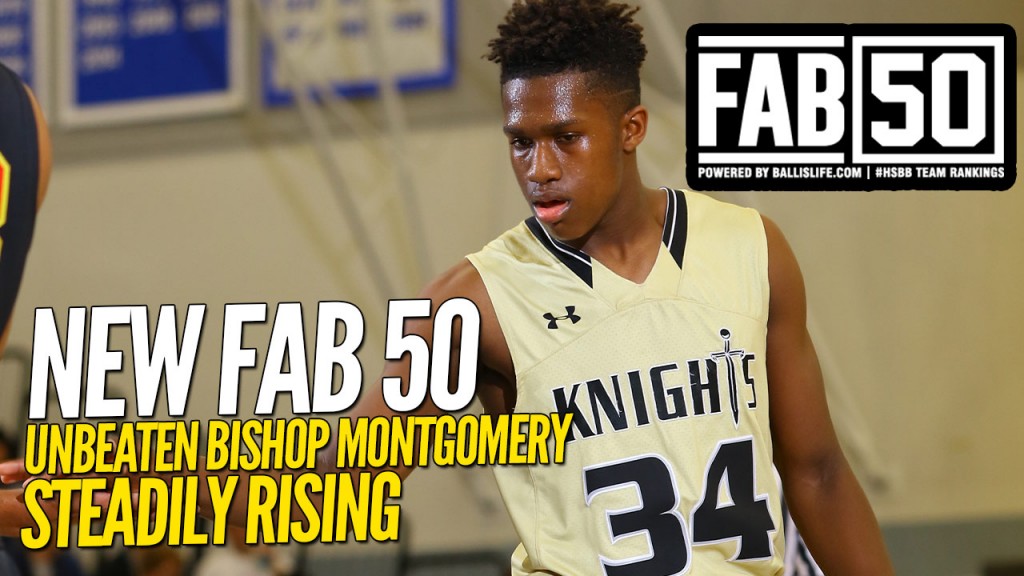 The tenth edition of the FAB 50 National Team Rankings powered by Ballislife.com for the 2017-18 season only has two new teams (from Colorado and Mississippi), as ...(Read more)

The tenth edition of the FAB 50 National Team Rankings powered by Ballislife.com for the 2017-18 season only has two new teams (from Colorado and Mississippi), as many teams will enter regional or state playoffs this week or just got its post-season started last week. For some unbeaten clubs their bubble burst last week while for others, major tests loom beginning this week. Who will win out and who will tumble in the rankings?

The FAB 50 mythical national champion the past two seasons have both finished the season unbeaten and this year there are some talented teams who can potentially lay claim to the No. 1 spot in the FAB 50 National Team Rankings powered by Ballislife.com should they finish unbeaten.

If season-long No. 1 Montverde Academy (Montverde, Fla.) finishes unbeaten by winning the 2018 GEICO Nationals in New York (March 29-31) against what should be a strong field of eight teams, the program will be in excellent position to capture its fourth FAB 50 crown in six seasons. Two years ago, it was Lonzo Ball and Chino Hills (Calif.) that worked its way up to No. 1 following a magical 35-0 campaign and last year Nathan Hale (Seattle, Wash.), led by Michael Porter Jr., finished 29-0 to lay claim to the No. 1 spot in a close decision over one-loss La Lumiere (LaPorte, Ind.).

Ironically, last year’s FAB 50 championship coach, former NBA player Brandon Roy, was working on a personal 51-game winning streak entering Washington’s SeaKing District 2 playoffs last week. Roy coached Hale to 29 consecutive wins last season before moving over to his alma mater, Garfield (Seattle, Wash.), for the 2017-18 season. Garfield was working on a 22-game winning streak to begin the season and were up to No. 18 in the FAB 50 before they were shocked in the district quarterfinals by Seattle Prep, 58-55.

Before their loss last week, the Bulldogs were one of the clubs looking to climb towards the Top 10 in the FAB 50, and should Montverde Academy falter in New York City, potentially put itself in position to contend for the mythical FAB 50 national championship. That scenario is basically over, although Garfield still deserves to be FAB 50 ranked since it owns an earlier 83-77 overtime win over Seattle Prep and still has an excellent shot to capture the WIAA Class 3A state crown. The Bulldogs fell 14 spots to No. 32 in this week’s FAB 50.

Another Washington club that fell from the ranks of the unbeaten was bubble club Richland (Richland, Wash.), which lost 56-53 to still unbeaten Gonzaga Prep (Spokane, Wash.) in the District 8 4A championship game. With its win, Gonzaga Prep moved up five spots in the FAB 50 to No. 36, but like Garfield would seem to have only an outside shot at a Geico Nationals berth.

After Montverde Academy, the next highest ranked unbeaten team is No. 15 Bishop Montgomery (Torrance, Calif.), the defending CIF Open Division state champions. After losing to Montverde Academy at the 2017 Spaulding Hoophall Classic, the Knights won 15 consecutive games to close out the season, and won the coveted CIF Southern Section Open Division and state open crowns to finish ranked No. 6 in the FAB 50 and beginning No. 7 in the preseason.

This season Bishop Montgomery is 26-0 and riding a 41-game winning streak entering this Saturday’s CIFSS Open Division semifinals versus No. 47 Sierra Canyon (Chatsworth, Calif.). California teams are not quite as strong as last season, but should the Knights win their upcoming section semifinal game and the open championship over either No. 33 Etiwanda (Etiwanda, Calif.) or bubble club Mater Dei (Santa Ana, Calif.), Bishop Montgomery will put itself in FAB 50 title contention even though CIF champions are currently ineligible for Geico Nationals.

How high can Bishop Montgomery climb if it remains unbeaten?

The same question can be asked of No. 17 Riley (South Bend, Ind.), No. 21 Upson-Lee (Thomaston, Ga.), No. 25 Warren Central (Indianapolis, Ind.) and No. 31 Plymouth-Whitemarsh (Plymouth Meeting, Pa.). Riley and Warren Central both compete in Indiana Class 4A, so one of those teams will fall in the state playoffs. The FAB 50’s other unbeaten clubs may not be facing another unbeaten FAB 50 team, but the competition will be tougher and the pressure will mount, so whichever teams remain unbeaten will be rewarded accordingly in the rankings as the season wears on.

One club trying to climb back in the FAB 50 after injuries and a slow start knocked it out is Webster Groves (Webster Groves, Mo.). You can watch the Statesmen and their highly-regarded, uncommitted point guard Courtney Ramey take on Kirkwood (Kirkwood, Mo.) in a rivalry game to close out the Ballislife HS Basketball Weekly Showcase regular season, Friday February 23 at 8:30 pm (ET).