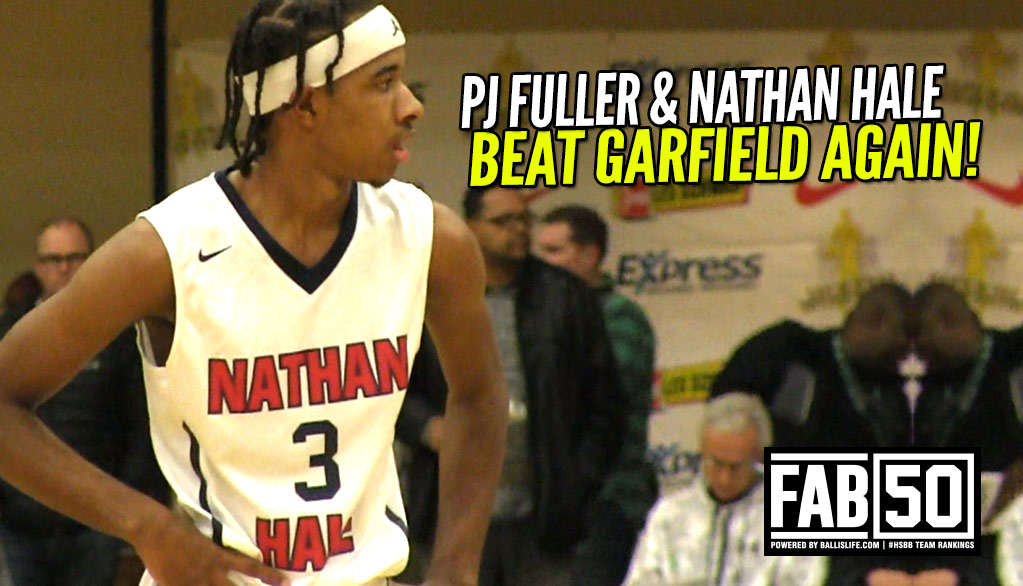 A vast majority of the nation’s top teams won their games last week, but that should change in the coming weeks as playoffs begin to kick ...(Read more)

A vast majority of the nation’s top teams won their games last week, but that should change in the coming weeks as playoffs begin to kick off around the country. There are three newcomers in the latest edition of the FAB 50 National Team Rankings powered by Ballislife.com, including Wise (Upper Marlboro, Md.), which just might be the best team in the DMV. No. 1 Nathan Hale (Seattle, Wash.) had another statement win, as it captured its first Metro League title since 1992. Will the Raiders close out the season No. 1?

When looking for the top teams in the greater Washington, D.C. Metro region (also known as the DMV), it’s easy to begin with the powerful Washington Catholic Athletic Conference. The WCAC annually fields some of the nation’s best teams, and member program DeMatha Catholic (Hyattsville, Md.) is a four-time mythical national champion (1962, 1965, 1978, 1984).

In recent seasons, three, and sometimes four, WCAC programs have been consistently ranked in the weekly FAB 50 National Team Rankings powered by Ballisife.com. This season is no different, as the No. 37 Stags are currently joined by No. 25 Paul VI (Fairfax, Va.) and No. 28 Gonzaga (Washington, D.C.). Since the WCAC teams typically play national schedules and beat up on each other in conference play, they often get the benefit of the doubt in national and local rankings.

In recent weeks, the Washington Post Top 20 has listed Rock Creek Christian (Upper Marlboro, Md.) as its No. 1 team. The Eagles were supposed to play cross-town Wise in a battle of unbeaten teams on January 21, but condensation in the gym postponed the showdown until February 11. In between, the Eagles continued to win and cracked last week’s FAB 50 at No. 40. Wise rose to No. 2 in the local rankings and when the dust finally settled, it was the Pumas that won the showdown game at the DMV Tip-Off Classic, 64-58.

Darron Barnes led Wise to victory with 18 points and 11 rebounds and point guard Michael Speight netted a team-high 19 points to hand Rock Creek Christian its first loss of the season. The win also validated a public school as the No. 1 team in local rankings.

“We live in an area where the excitement is about private schools,” Wise coach Rob Garner told The Washington Post. “But there are some great public schools out there. We felt like we were playing for all of them, too.”

From a national perspective, we are not quite ready to place Wise as our No. 1 ranked team in the region. Similar to last year’s H.D. Woodson (Washington, D.C.) club that won the DCSAA title, however, Wise will have plenty of opportunity to rise in the FAB 50 if it remains unbeaten. Woodson’s 32-0 team finished No. 17 in last season’s final FAB 50.

For now, Paul VI (Fairfax, Va.) remains the top-ranked FAB 50 team in the region after Gonzaga fell to unranked St. John’s (Washington, D.C.) and DeMatha lost to unranked Bishop O’Connell (Arlington, Va.) last week. Both clubs remain in the FAB 50, as Paul VI faces Gonzaga on Valentines’ Day and DeMatha on February 20, but Wise has now done enough to now be ranked ahead of Stags in the FAB 50. DeMatha fell 12 spots, Gonzaga seven and Rock Creek Christian just two spots this week. (The Eagles fell to No. 5 in the Washington Post Top 20).

Wise in the highest ranked among three newcomers this week. No. 48 Bolingbrook (Bolingbrook, Ill.) in the highest ranked team by the Chicago Sun-Times and No. 50 Vashon (St. Louis, Mo.) returns to the rankings. One of the Wolverines’ two losses is to No. 8 Jonesboro (Jonesboro, Ark.) and they have a big game coming up against regionally-ranked Webster Groves (Mo.) on February 16. Webster Groves just recorded a big 76-68 win over bubble club Iowa City West (Iowa City, Iowa.).

Nathan Hale (Seattle, Wash.) met No. 24 Garfield for the third time this season in the Seattle Metro League title game. The first time these two teams played, Hale rolled, 87-64, as Garfield’s Daejon Davis sat out that December game. That game was played in the semifinals of the Les Schwab Tournament in Oregon and the conventional thinking was the regular league contest at Garfield could be anyone’s ballgame, especially with Davis back in the lineup.

That proved to be true, as the game was tight before Hale pulled out a 69-65 victory before a national television audience with Mr. Basketball USA front-runner Michael Porter Jr. scoring 34 points and grabbing 10 rebounds. The Metro League title game figured to be a close and emotional affair. It surely had its drama, but the actual contest wasn’t close at all, as Hale took a 49-16 halftime lead and cruised to 91-58 win over the defending Metro League champs.

Garfield couldn’t figure out a way to slow down the nation’s No. 1 ranked prospect, as Porter (who went for 34 points and 20 rebounds in the first game) finished with 39 points and 13 rebounds. Jontay Porter, Michael’s younger brother, added 21 points, while sophomore P.J. Fuller III (who played his freshman season at Garfield) contributed 17.

As its quest for a mythical national title continues, Hale won its first Metro League crown since the 1991-92 season. As for Garfield, it drops 22 spots to No. 46. The Bulldogs remain in the FAB 50 because despite the lopsided score, Garfield has lost to only one other team so far this season: No. 28 Gonzaga (Washington, D.C.).