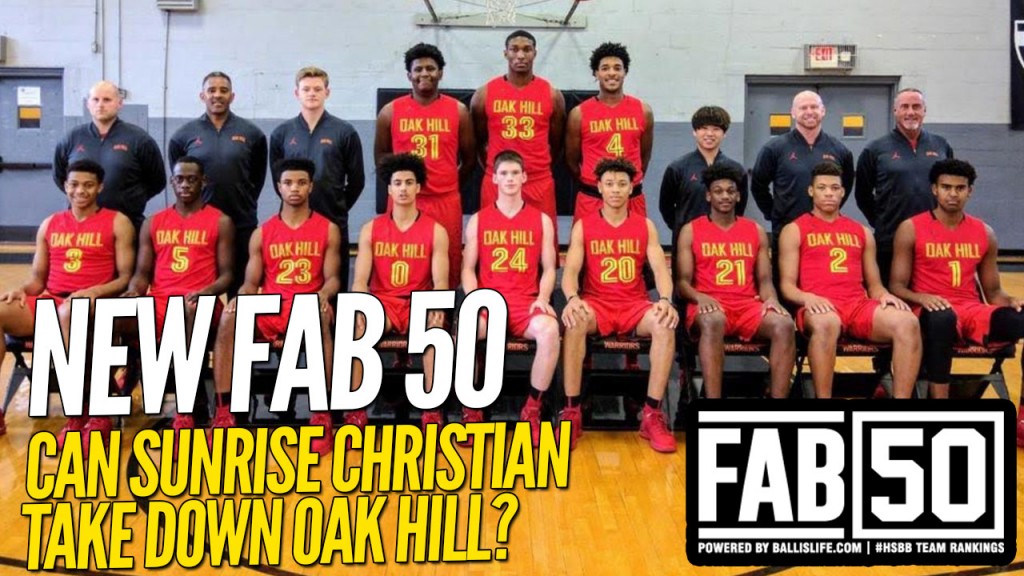 The eighth edition of the FAB 50 National Team Rankings powered by Ballislife.com for the 2017-18 season shows two new teams and some movement after Sunrise Christian ...(Read more)

The eighth edition of the FAB 50 National Team Rankings powered by Ballislife.com for the 2017-18 season shows two new teams and some movement after Sunrise Christian Academy (Bel Aire, Kan.) wins the St. James Invitational in Hagerstown, Md. How far does Findlay Prep (Henderson, Nev.) drop after losing to the semifinals to the Buffaloes? The newcomers this week are from Illinois, North Carolina and California.

The big-time national showcase events are coming to a close and the main one last weekend caused movement in the latest edition of the FAB 50 National Team Rankings powered by Ballislife.com.

What To Do With Sunrise?

The Buffaloes came into the St. James Invitational ranked No. 29 in the FAB 50, but shoot up 19 spots this week to No. 10 as a result of the head-to-head win over Findlay Prep and a then unbeaten St. Benedict’s. We contemplated leaving the Buffaloes behind the Pilots because of two losses to unranked teams, but those came early in the season when Loyola-Chicago bound point guard and two-year starter Isaiah Bujdoso was out with injury. We decided to drop Findlay Prep four spots to No. 11.

The only caveat in moving Findlay Prep down to No. 11 was its head-to-head win over No. 7 Paul VI (Fairfax, Va.). Findlay Prep had to remain in front of No. 13 DeMatha Catholic (Hyattsville, Md.), which has a loss to Paul VI, and that key Pilots’ victory will play a big factor if the Panthers continue to lead the way in the Washington Catholic Athletic Conference (WCAC) and the Pilots close the regular season and Dick’s Nationals strongly. If Paul VI comes back and wins the WCAC tourney, with an unbeaten slate in regular season WCAC play, it will have enough quality victories to maintain its ranking in front of Findlay Prep should the Pilots falter.

Paul VI travels to Gonzaga for a key game on February 9, as the Eagles look to avenge their only loss of the season so far, and The Panthers still have to play DeMatha a second time in WCAC play, too.

Sunrise Christian also owns a win over No. 12 La Lumiere (LaPorte, Ind.) and we made the call to keep Findlay Prep in front of the defending Dick’s Nationals champions. Findlay Prep has more quality wins and lost to top-ranked Montverde Academy at the buzzer, while the Lakers were defeated by the No. 1 team in the FAB 50 by 22 points (77-55).

We’ll find out more about Sunrise Christian and where it stands in the FAB 50 when it takes on No. 2 Oak Hill Academy at the Heartland Hoops Classic in Grand Island, Neb. February 10.

One of Sunrise Christian’s losses is to bubble club South Garland (Garland, Texas), which bodes well for Guyer (Denton, Texas), which has a win over the only club it lost to (University Interscholastic League Class 5A No. 1 Waxahacie, Texas) and is top-ranked UIL Class 6A club. South Garland checks in at No. 5 in the latest TABC Poll. Guyer moved up five spots this week to No. 9.

One of the newcomers this week is No. 49 North Mecklenburg (Huntersville, N.C.), which checks in with a 21-1 record, including handing 19-1 Gate City (Gate City, Va.) its lone loss of the season so far at the Arby’s Classic in Bristol, Tenn.

Gate City, of course, is led by Georgetown-bound Mac McClung and last week he went over 40 points in each of the Blue Devils’ three victories. He’s now eyeing Allen Iverson’s single-single VHSL scoring mark of 948 points set in 1992-93 during his junior campaign. Iverson did not play his senior season, but went on to Georgetown, where he developed into the No. 1 pick of the 1996 NBA Draft and a NBA Hall of Famer.

You can catch McClung on the Ballislife HS Basketball Weekly Showcase twice this week as fans look to see him continue the scoring onslaught. Gate City takes on Ridgeview (Clintwood, Va.) on Tuesday, February 6 at 7:45 pm (ET). On Wednesday night February 7 at 7:45 pm (ET), the Blue Devils take on Daniel Boone (Gray, Tenn.).

Will McClung keep his scoring up and will North Mecklenburg help Gate City eventually crack the FAB 50 if both programs keep up the winning ways?