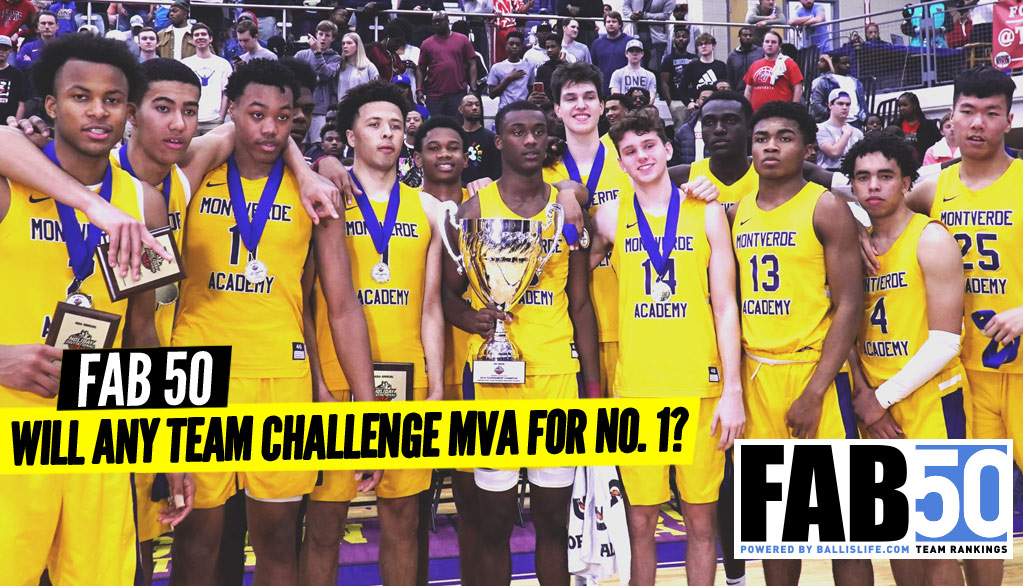 It's pretty obvious who the nation's No. 1 team is, but the latest edition of the FAB 50 National Team Rankings was still the toughest set of results to compile, and make sense of, in many years. When the dust settled, we came up with a pecking order we're comfortable with, including 11 newcomers!

It’s pretty obvious who the No. 1 team in the country is, but the latest, updated edition of the FAB 50 National Team Rankings powered by Ballislife.com was the toughest set of results to compile, and make sense of, in many years. When the dust settled, we came up with a pecking order we’re comfortable with, including 11 newcomers led by No. 7 St. John’s (Washington, D.C.) down to No. 50 St. Mary’s Prep (Orchard Lake, Mich.).

As the results of the holiday tournaments played out, the FAB 50 National Team Rankings powered by Ballislife.com looked strong, as a majority of the higher ranked teams beat lower ranked or bubble teams throughout the country. Perhaps because teams were a bit weary with travel, or perhaps because the middle of the pack teams are all on the same level and can’t beat each other on any given night this season, the rankings were turned upside down in the short week after New Year’s 2020.

When this happens, there are a five key factors to keep in mind to help navigate the waters and come up with a credible rankings order that make sense.

The first one is to rely on the previous set of rankings and move the teams up and down from their previous position and not make snap judgements. That’s why preseason rankings are important, because it give compilers (and fans) a base of how good teams might be as the season plays out.

Second would be a focus on results, with an emphasis on most recent games played. Enough time has passed that teams have the ability to improve since November. That’s the case with newcomer Rancho Christian (Temecula, Calif.), which looked shaky in its season-opener and lost two games in November. The Eagles, particularly their guards, are playing much better recently and Rancho Christian was able to knock off previous No. 6 Sierra Canyon (Chatsworth, Calif.) 85-81 in overtime, in the championship game of The Classic at Damien in Southern California on December 30. The Eagles check in at No. 17 and in front of the Centennial (Corona, Calif.) team it lost to early that went on to capture the Tarkanian Classic in Las Vegas and The King Cotton Classic in Pine Bluff, Ark., behind Portland St.-bound guard Paris Dawson, who was MVP at both tourneys. The Huskies are one of 11 newcomers this week and check in at No. 24.

The third factor to consider is what’s coming up. Even though Rancho Christian is now California’s top-ranked team, it will have to gear up for another showdown with Sierra Canyon on January 11 at the Elite Invitational Showcase at Pasadena City College. Should the Eagles beat Sierra Canyon for the second time in two weeks, they will undoubtedly deserve to be ranked higher than Centennial despite the early head-to-head result. Should they lose, however, that result will come more into play.

The fourth factor is to look for any details that might have affected the outcome of a big game and to not forget about the big wins a team has on its resume in light of a recent skid. That’s the case with No. 8 IMG Academy (Bradenton, Fla.), which fell to No. 30 Briarcrest Christian (Eads, Tenn.), 32-22, at the ARS Hoopfest in Memphis on January 4. Tennessee-bound Jaden Springer did not play in the low-scoring contest while nursing a foot injury, but earlier in the season the Ascenders showed what they are capable of with wins over No. 15 Gonzaga (Washington, D.C.) and No. 19 Archbishop Stepinac (White Plains, N.Y.) at the City of Palms Classic in Ft. Myers, Fla. before falling to No. 1 Montverde Academy (Montverde, Fla.) in the title game, 63-55. The fact IMG Academy is the only team to stay even remotely in the game with the Eagles is another reason why it stays put at No. 8 in the most updated rankings. This is on top of Duke-bound Jalen Johnson no longer being part of the team and not playing in any of IMG’s big games.

A fifth factor is to not put too much emphasis on the result of one game and ignore a team’s talent level or the rest of its resume. St. Frances Academy (Baltimore, Md.) did not play good in its 73-55 loss to No. 6 Sunrise Christian Academy (Bel Aire, Kan.), but there is not doubt coach Nicholas Myles has a fine team that will win big games throughout the season. The No. 3 spot in the previous FAB 50 might have been high, but there is little doubt the Panthers are one of the nation’s finest teams as they fall to No. 10. Sunrise also owns wins over No. 9 DeMatha Catholic (Hyattsville, Md.), No. 12 La Lumiere (La Porte, Ind.), and No. 15 Gonzaga (Washington, D.C.). That strong resume not only helps St. Frances Academy, it also keeps the Buffaloes from falling too much (two spots) following a recent 62-54 loss to Huntington Prep of West Virginia at the Cancer Research Classic in West Virginia.

“St. Frances Academy is better than they were in that game they lost,” remarked Hoop Scoop publisher Clark Francis, who was in attendance at that City of Palms game and also attended the DC Hoopfest, John Wall Invitational, Beach Ball Classic and Memphis ARS Hoopfest in recent weeks. “IMG is good, but Montverde Academy is way ahead of the pack. Sunrise Christian Academy might be better than Hamilton Heights Christian Academy, but of course you can’t rank it that way. Nobody else (besides Montverde Academy) has separated themselves.”

Besides crys for a shot clock (which eight states employ) in light of the IMG-Briarcrest Christian score, there was another key factor in the result of that game.

“Kennedy Chandler of Briarcrest Christian is one of the best point guards in the country, regardless of class,” Francis said. “He controlled the tempo. He can stop on a dime and is very quick with ball. If Springer plays, they beat Briarcrest.”

Which brings us to top-ranked Montverde Academy. Some veteran observers are calling this year’s MVA club the best team they have ever seen. The Eagles have all the ingredients to run the tables against one of the nation’s toughest schedules: size, athleticism, shooting, a deep bench, unselfish players, and coaches with experience in wining high level high school basketball games. We always focus on results, not what could happen or how a team looks on paper, so we’ll wait to pass judgment before publishing any proclamations of Montverde’s standing among the all-time great teams. As we’ve already seen this season, we know things can (and will) happen that will affect the results of matchups before the final game at 2020 GEICO Nationals in New York.

A focus on results not only keeps things in proper perspective, it led to a sense of excitement, as opposed to a feeling of anxiety, about compiling this week’s FAB 50 rankings.