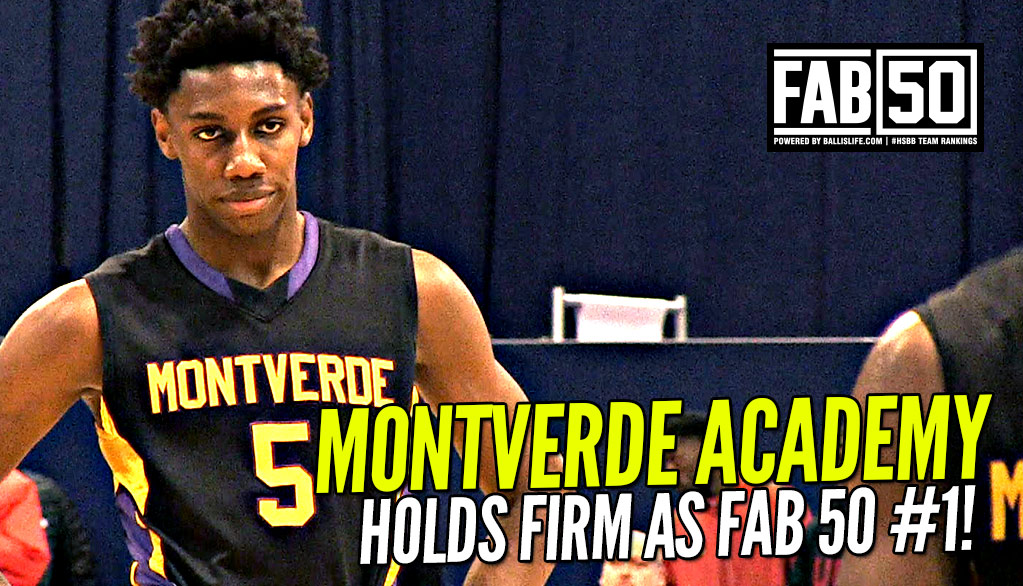 The fourth edition of the FAB 50 National Team Rankings powered by Ballislife.com for the 2017-18 season shows six new teams, as we are at the point in ...(Read more)

The fourth edition of the FAB 50 National Team Rankings powered by Ballislife.com for the 2017-18 season shows six new teams, as we are at the point in the season where we start rewarding still unbeaten teams. There isn’t too much movement at the top with previous No. 4 Memphis East (which was No. 2 in the preseason) falling seven spots after losing three consecutive games. Next week’s FAB 50 will be a special MLK edition which includes all the results from MLK events over the three-day weekend.

There was a debate in the preseason about which team should start the 2017-18 season No. 1 in the nation: Montverde Academy of Florida or Memphis East of Tennessee. For factors we discussed at length back in November, we went with the Eagles and quite frankly there is no debate now.

All the credible pollsters made the switch after Memphis East fell in the title game of the City of Palms Classic title game, but unexpectedly the Mustangs enter this week having lost three games in a row after losing twice at the Penny Hardaway Hoopfest at White Station High School in Memphis. Hardaway, of course, is the Mustangs’ head coach and it was quite surprising to see his talented team lose two games in a row to out-of-of-state teams in his hometown.

Memphis East fell to bubble club Olive Branch (Miss.), 73-70, and fell to previous No. 9 Simeon (Chicago), 78-73, in overtime. Simeon was able to avenge a loss to the Mustangs at the City of Palms Classic and moves up three spots to No. 6, one spot behind the McEachern (Power Springs, Ga.) club it lost to. What made matters even more surprising (from a rankings perspective) is Olive Branch lost the best night to Cordova (Tenn.), as were going to place that club in the FAB 50 (but behind Memphis East) until that result came in. That causes Memphis East to drop a bit further than it would have otherwise, as Hardaway’s boys get rankings credit for its win over Simeon and a 62-60 victory over No. 16 Oak Ridge (Orlando, Fla.). The Mustangs fall in at No. 11, one spot ahead of the Paul VI (Fairfax, Va.) team that has split with Oak Ridge.

With Memphis East losing twice, the big winners for the week were Washington Catholic Athletic Conference clubs DeMatha Catholic (Hyattsville, Md.) and Gonzaga (Washington, D.C.). DeMatha climbed to No. 4 after defeating McEachern, 73-63, as sophomore center Hunter Dickinson netted 24 points, 12 rebounds and four assists in a game played at the Cancer Research Classic in Wheeling, W. Va. The only loss to the Stags is a 76-66 setback to No. 1 Montverde Academy at the Beach Ball Classic in South Carolina before the turn of the New Year.

Gonzaga is rolling along just fine even although Notre Dame commit Prentiss Hubb was lost to injury for the season before got going for Steve Turner’s boys. Gonzaga will face No. 12 Paul VI and Dematha in back-to-back WCAC games on January 9 and 11, respectively.

You can watch DeMatha Catholic on the Ballislife HS Basketball Weekly Showcase live from the Hoophall Classic on January 14 (2:15 pm ET) versus Cole Anthony and his team at Archbishop Molloy (Queens, N.Y.). That event will have the biggest FAB 50 impact among MLK showcases across the country this upcoming holiday weekend.

In addition to the DeMatha Catholic-Molloy game, No. 2 Oak Hill Academy will face No. 3 University School (Ft. Lauderdale, Fla.) on national television on MLK Monday. Montverde Academy will face the Simeon club that has split with Memphis East on Saturday at the event and come back on Monday and face No. 17 Mater Dei (Santa Ana, Calif.).