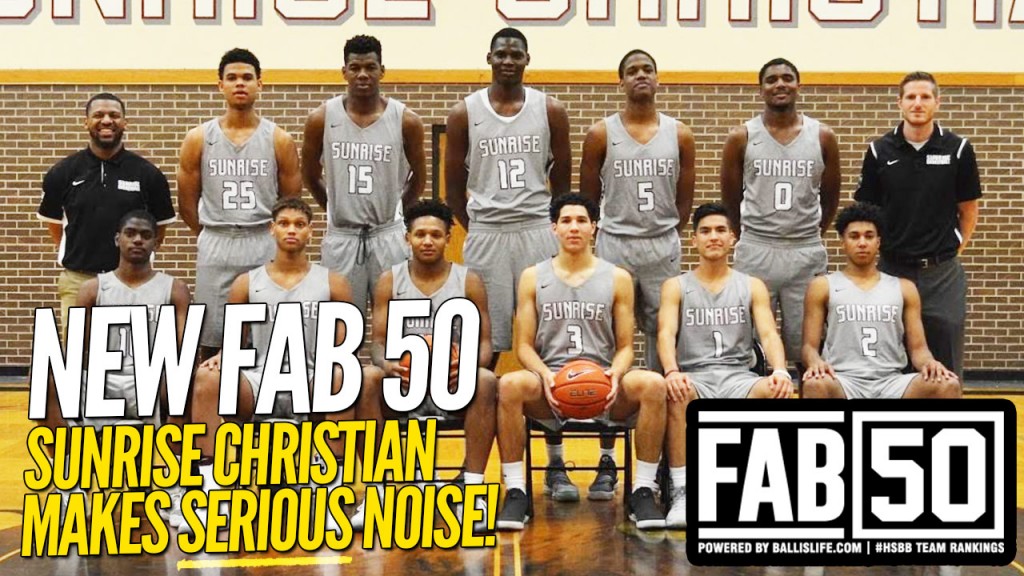 The ninth edition of the FAB 50 National Team Rankings powered by Ballislife.com for the 2017-18 season only has one new team (from Ohio), but there is ...(Read more)

The ninth edition of the FAB 50 National Team Rankings powered by Ballislife.com for the 2017-18 season only has one new team (from Ohio), but there is major change near the top as Sunrise Christian Academy (Bel Aire, Kan.) is now a major FAB 50 mythical national title contender after a big jump up in the rankings for the second consecutive week. What does Sunrise’s big jump mean for the other top-ranked clubs?

After winning the Saint James Invitational in Hagerstown, Md. two weeks ago, it didn’t seem possible coach Luke Barnwell’s club could top that performance last week. However, that’s exactly what happened after the Buffaloes took on then No. 2 and unbeaten Oak Hill Academy (Mouth of Wilson, Va.) at the Heartland Hoops Classic in Grand Island, Neb. February 10.

After defeating then No. 7 Findlay Prep (Henderson, Nev.) on its way to the St James title and rising 19 spots in last week’s national rankings, Sunrise Christian Academy is up nine spots and takes over Oak Hill’s previous spot at No. 2 in the most recent FAB 50 National Team Rankings powered by Ballislife.com after defeating the Warriors, 76-65. The Buffaloes got 20 points from 6-foot-7 junior forward Malik Hall and 13 points from Khaleem Bennett, a 6-foot-4 shooting guard signed to Central Arkansas, in handing Oak Hill its first loss of the 2017-18 regular season. Sunrise Christian Academy, which lost to Victory Rock Prep of Florida and bubble club South Garland (Texas) when Loyola-Chicago bound point guard and two-year starter Isaiah Bujdoso was out with injury, was in control throughout the second half and led by 17 points before the game’s final minutes turned into a free throw shooting contest as Oak Hill looked to stretch the game.

We only contemplated keeping Oak Hill Academy in front of Sunrise Christian or placing another team at No. 2 behind season-long No. 1 Montverde Academy for a split second. The Buffaloes’ won in convincing fashion and Oak Hill had to remain in front of previous No. 3 University School (Ft. Lauderdale, Fla.) for an equally convincing win over the Sharks at the Hoophall Classic.

As a result, teams previously ranked No. 2 through No. 6 all fell a spot, with previous No. 11 Findlay Prep (Henderson, Nev.) getting credit for its earlier 84-62 win over previous No. 7 Paul VI (Fairfax, Va.) and moving up three spots to No. 8. Findlay Prep’s 18-point win looks good now that the Panthers clinched the WCAC title with a 58-51 win over previous No. 8 Gonzaga (Washington, D.C.). And of course, Findlay’s loss to Sunrise Christian Academy doesn’t look too bad, either.

“Our kids have worked so hard for moments like we had the last two weeks,” Barnwell told Ballislife. “To me, it isn’t a coincidence we played our best on the biggest stages. I’m so proud of the effort they gave in three games against top 5 teams. They are fun to coach and deserve it.”

Another Close Call For No. 1 Montverde Academy

Amazingly, Sunrise Christian Academy came close to rising all the way to No. 1, but top-ranked Montverde Academy found a way to pull out a close win for at least the third time this season. The Eagles defeated No.  6 Simeon (Chicago, Ill.) by two points at the Hoophall Classic and needed a buzzer-beating jumper from Mike DeVoe to knock off Findlay Prep in the title game of their own invitational tournament.

Against No. 15 Roselle Catholic of New Jersey (a team we recently featured twice on the Ballislife HS Basketball Weekly Showcase), the Lions held a six-point lead with just under 30 seconds remaining. That’s when Mr. Basketball USA candidate and Duke recruit R.J. Barrett went to work. He nailed five free throws (while Roselle Catholic missed costly ones and committed a couple of turnovers) and made a break-way lay-up to give Montverde Academy a dramatic 60-59 win at the Metro Classic in New Jersey.

Coach Kevin Boyle’s team won two more games over the weekend at the event to finish the regular season with an unbeaten slate and wins against 12 teams currently or previously ranked in the FAB 50.

Expect Montverde to be the top seed in the GEICO High School Basketball Nationals with Sunrise Christian Academy and Oak Hill Academy likely to compete as well.