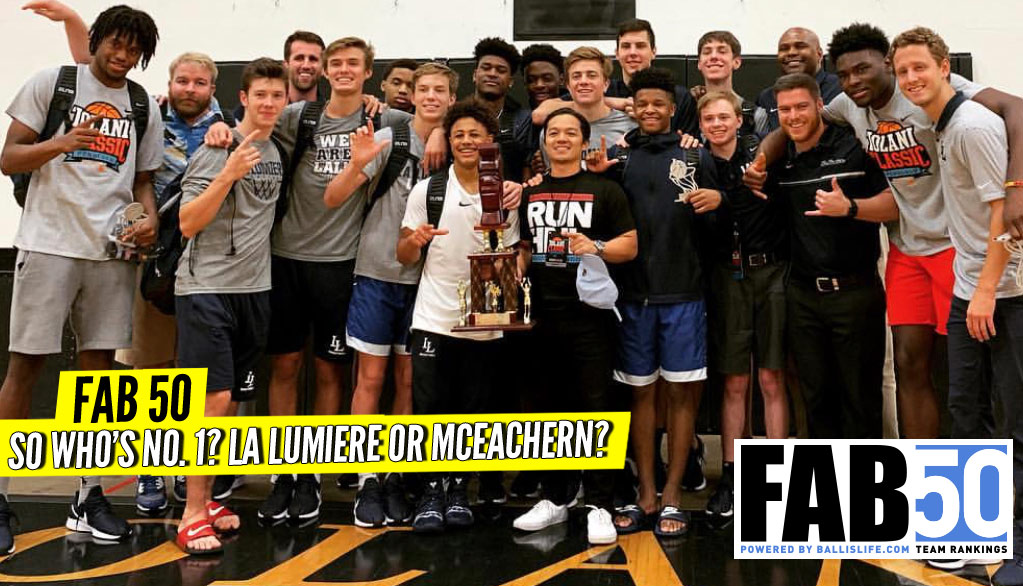 After all the teams returned home for New Year's and the results came in, we have a new pecking order at the top of the FAB 50. So who is No. 1, La Lumiere of Indiana or McEachern of Georgia? We break it down!

It’s been a hectic two weeks for the nation’s top teams and after all the teams returned home for New Year’s and the results came in, we have a new pecking order at the top of the FAB 50 National Team Rankings powered by Ballislife.com. So who is No. 1, La Lumiere of Indiana or McEachern of Georgia? We break it down as the top three teams in the preseason all went down over the holidays. There are six new teams in the latest edition of the most in-depth team rankings in the industry.

We had to wait an extra day to get out the latest edition of the FAB 50 National Team Rankings powered by Ballislife.com because of the way the calendar fell in 2018 with New Year’s Eve on a Monday. It meant we had to wait for the results of John Rhodes’ Beach Ball Classic in Myrtle Beach, S.C., and a few other big tournaments that traditionally end on New Year’s Eve, such as the Arby’s Classic in Bristol, Tenn.

Those results were just to make sure our deep rankings were as accurate as possible because the big news over the holiday tournament season was the No. 1, No. 2, and No. 3 ranked teams in the FAB 50 all went down at the City of Palms Classic in Florida and the Iolani Classic in Hawaii and fans want to know, who is the new No. 1 as we ring in 2019?

It came down to previous No. 5 La Lumiere (La Porte, Ind.), which defeated previous No. 1 Montverde Academy (Montverde, Fla.) in the Iolani Classic semifinals, 58-51, and previous No. 10 McEachern (Powder Springs, Ga.), which outlasted 10 other FAB 50 ranked teams to capture the City of Palms title.

Gerald Drumgoole scored 19 points for the Lakers and senior forward Keion Brooks hit two big 3-pointers down the stretch to help La Lu snap the Eagles’ 41-game winning streak. At City of Palms, previous No. 3 IMG Academy (Bradenton, Fla.) fell to previous No. 28 Mountain Brook (Mountain Brook, Ala.) in the quarterfinals and No. 2 Oak Hill Academy (Mouth of Wilson, Va.) fell to previous No. 13 Imhotep Charter (Philadelphia, Pa.) in the semifinals. Considering McEachern demolished Mountain Brook in the semifinals, 50-29, and defeated Imhotep Charter, 68-47, for the tournament title as junior point guard Sharife Cooper was named tournament MVP, the 10-0 Indians have a good enough resume to be considered No. 1. They also defeated three other opponents that were ranked at the time of victory and have tough games coming up.

With both teams still unbeaten, who deserves to be No. 1?

It was a close call, but we went with La Lumiere for three reasons. One, it was ranked higher than McEachern going into the last rankings shuffle. If we didn’t think La Lu was deserving of such lofty acclaim, we wouldn’t have started them higher than McEachern in the preseason. Second, La Lu defeated our defending FAB 50 champion and the No. 1 team at the time and that carries plenty of weight in our system. Montverde Academy hasn’t lost to another team. Lastly, the Lakers face No. 16 Bishop Gorman (Las Vegas, Nev.) and have a rematch with Montverde Academy this upcoming weekend at the Cancer Research Classic in Wheeling, W. Va., where they must prove their rankings worth.

Should Montverde Academy win the re-match, McEachern will be waiting in the wings and Montverde Academy will also be angling to get back to the top spot. McEachern has a game with No. 17 Rancho Christian (Temecula, Calif.), which lost to Bishop Gorman in the Tarkanian Classic title game in Las Vegas, on January 21. The big silver lining for McEachern is GHSA state champions have been eligible for GEICO Nationals in recent seasons and if it holds serve the Indians could conceivably face La Lumiere on the court at the end of the season. In that ideal scenario, this rankings debate will be settled on the court.

Sierra Canyon (Chatsworth, Calif.) has only lost to Montverde Academy, 57-49, and that game occurred AFTER La Lumiere defeated the Eagles. On its side of the bracket at Iolani, Sierra Canyon defeated No. 22 Westchester (Los Angeles, Calif.), which captured the Beach Ball Classic title on New Year’s Eve, but in accordance to CIF rules, Sierra Canyon cannot play La Lumiere. So in essence there was no championship game and Sierra Canyon missed out on a prime opportunity to play the team that just knocked off No. 1. Will Sierra Canyon get another opportunity like that this season?

That remains to be seen, but the worst scenario possible happened for Sierra Canyon, as it fell to the team it saw lose in the other side of the championship bracket. As for La Lumiere, it survived a “trap game” by defeating tournament quarterfinalist Oak Ridge (Orlando, Fla.), 72-58, in its “championship” game.

In future seasons, per CIF rules, members schools cannot play independent programs that don’t compete for a state crown such as La Lumiere, Oak Hill Academy and Montverde Academy. Let’s hope tournament organizers adjust their invites and brackets so situations such as the one involving Sierra Canyon doesn’t happen again. For more on the enforcement of this rule, CLICK HERE.

In addition to the big No. 1 vs. No. 3 rematch showdown at the Cancer Research Classic between La Lumiere and Montverde Academy on January 5 (3 pm ET), there are other big games on tap at the two-day event. No. 2 McEachern faces No. 34 Findlay Prep (Henderson, Nev.) on January 4 (2:40 pm ET) with La Lumiere playing Bishop Gorman in the very next game. At 6 pm ET on January 4, Montverde Academy faces battle-tested Norcross (Norcross, Ga.) and at 7:45 pm ET, No. 8 Imhotep Charter faces No. 14 Sunrise Christian Academy (Bel Air, Kan.).

Findlay Prep faces Sunrise Christian Academy the next afternoon at 1:20 pm ET with La Lumiere-Montverde Academy in the next game. Gorman faces Gonzaga (Washington, D.C.) at 4:40 pm ET, No. 6 DeMatha Catholic (Hyattsville, Md.) faces Norcross at 6:05 pm ET and the event closes out at 7:45 pm ET with McEachern facing Imhotep Charter in a rematch of the City of Palms title game.