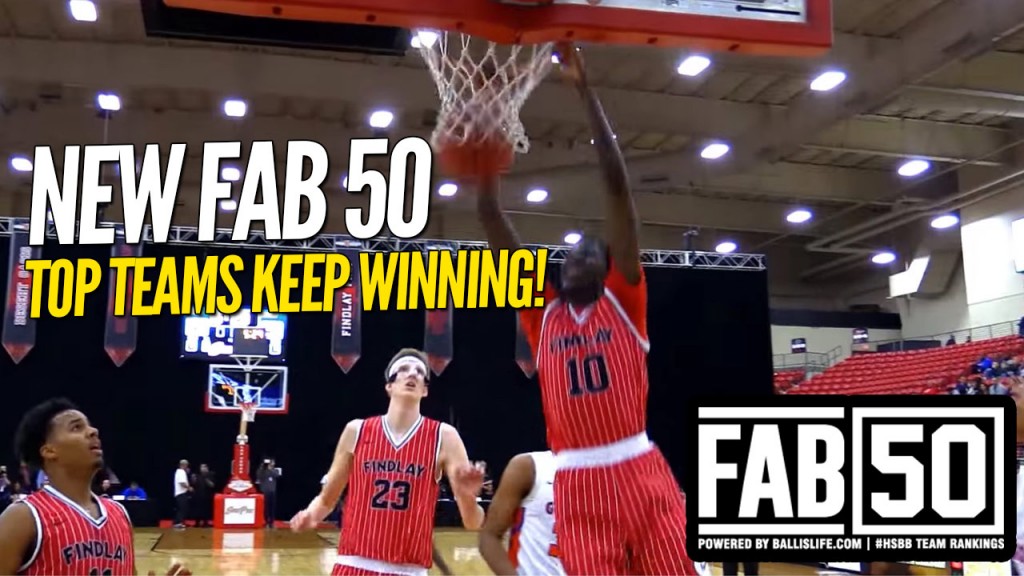 The sixth edition of the FAB 50 National Team Rankings powered by Ballislife.com for the 2017-18 season is a bit calmer after the MLK showcases, as most ...(Read more)

The sixth edition of the FAB 50 National Team Rankings powered by Ballislife.com for the 2017-18 season is a bit calmer after the MLK showcases, as most elite teams stayed home for league and/or conference games. This resulted in plenty of wins, as only one team among the first 25 (DeMatha Catholic of Maryland) lost and nobody dropped outside the Top 25 among those teams. The very best are starting to separate themselves from the pack, as there was movement in the bottom half of the FAB 50 which produced six newcomers, including three unbeaten clubs and three that began the season highly-regarded.

After the grueling MLK weekend when many of the nation’s elite teams travel and take on tough foes, it was a short week and light work a majority of the teams in the FAB 50 National Team Rankings powered by Ballislife.com. In addition, the inclement weather that has battered the East and parts of the Southeast caused the cancellation of many games in states such as Tennessee and Virginia.

In fact, the only team among the first 25 in the FAB 50 to lose was previous No. 4 DeMatha Catholic (Hyattsville, Md.), which fell to previous No. 10 Paul VI (Fairfax, Va.) 93-78 in Washington Catholic Athletic Conference play. Sophomore sensation Jeremy Roach led the way for the Panthers, which is still unbeaten in WCAC play. Two weeks ago, Paul VI handed new No. 10 Gonzaga (Washington, D.C.) its first WCAC and overall loss, 67-53.

The Stags drop from No. 4 to No. 11, as they fall in line behind the Gonzaga team that beat them 71-62 in conference play where they now stand at 6-2. The second round of conference play won’t begin for at least another week, but DeMatha does play 6-3 St. John’s (Washington, D.C.) on January 23.

Paul VI moves up one spot to No. 9 in front of Gonzaga and one spot behind the Findlay Prep (Henderson, Nev.) team it lost to. The Panthers also have a split with No. 14 Oak Ridge (Orlando, Fla.). Steve Reece’s talented club not only has the Paul VI split, it has lost to DeMatha and No. 7 Memphis East (Memphis, Tenn.), which recently had some games wiped out by the cold weather.

The pecking order among the Top 15 falls well in line as No. 13 Imhotep Charter (Philadelphia, Pa.) also has a loss to DeMatha, Memphis East has a split with No. 5 Simeon (Chicago, Ill.), which has a loss to No. 4 McEachern (Powder Springs, Ga.) and must behind City of Palms Tournament Champion and No. 3 University (Ft. Lauderdale, Fla.).

There could be some shake up next week as Findlay Prep and still unbeaten and No. 6 Shadow Mountain (Phoenix, Ariz.) head to Florida to participate in the Montverde Academy Invitational. Naturally, the Pilots and Shadow Mountain after scheduled to meet in a semifinal showdown on Friday, while the top-ranked Eagles could face a talented Madison Prep Academy (Baton Rouge, La.) club that has recorded some solid wins and is on the radar of the FAB 50 bubble.

Among this week’s six FAB 50 newcomers, three are unbeaten and the others return after being ranked in the 2017-18 preseason FAB 50 rankings. New No. 47  Cretin-Derham Hall (St. Paul, Minn.) had done enough to recover from its December 7 loss to Edina (Minn.) after beginning the season at No. 47. Romeo Langford and new No. 50 New Albany (New Albany, Ind.) lost to Floyd Central (Floyd Knobs, Ind.) by two points on December 8 after beginning the season at No. 32. New No. 49 Westlake (Austin, Texas), Texas’ No. 2 ranked Class 6A club, has done enough to overcome its hard-to-explain 54-52 loss to Catalina Foothills (Tucson, Ariz.) in the first round of the Rancho Mirage Holiday Classic in California after Christmas. Westlake, which began the season one spot ahead of New Albany at No. 31, has also lost twice to Class 6A No. 1 and No. 15 Guyer (Denton, Texas).

Get Ready For Mac McClung

Gate City (Va.) is a FAB 50 bubble club at 13-1 and in order to get a shot at cracking the FAB 50, the Blue Devils must win two big games this weekend. Gate City, which has a single loss to 16-1 North Mecklenburg, is led by high-flying point guard and Georgetown commit Mac McClung.

You can catch both Gate City Games this weekend live on the Ballislife HS Basketball Weekly Showcase. On January 26, the Blue Devils host Union (Tenn.) at 7:45 pm (ET) and the next night Gate City hosts highly-regarded Cleveland (Tenn.) at 6 pm (ET). Make sure to check the Ballislife Show Page to get a reminder link for both games and for other game updates.