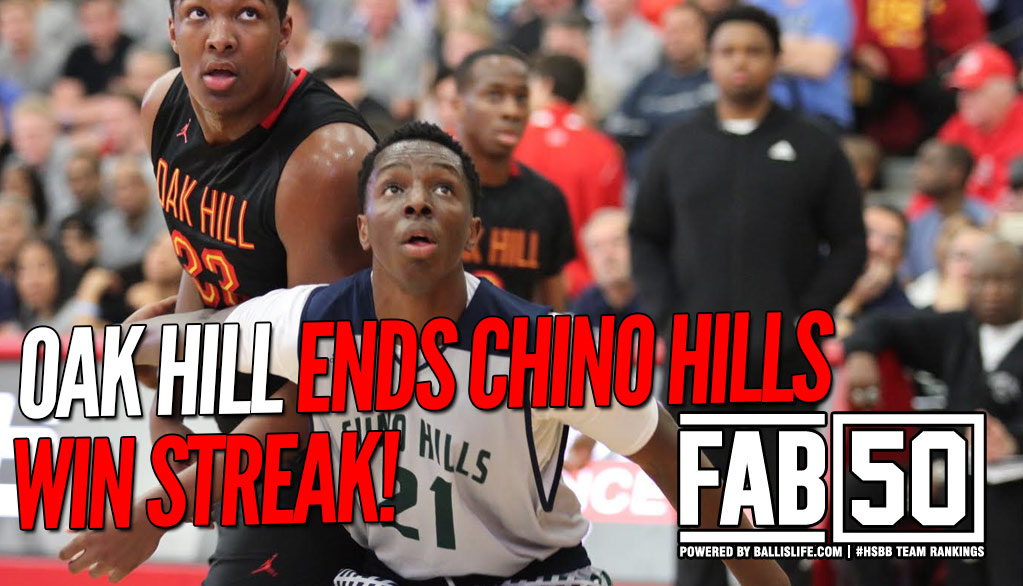 Defending FAB 50 Mythical National Champ Chino Hills (Calif.) saw its 60-game winning streak come to an end at the Nike Extravaganza versus preseason No. 1 Oak Hill Academy (Mouth of Wilson, Va.). With the Warriors having three losses, read on to see how much the Huskies dropped in the latest edition of the FAB 50 National Team Rankings powered by Ballislife.com. Federal Way (Federal Way, Wash.) owned the nation’s longest win streak and saw it come to an end at 63 games. Do the Eagles have a strong enough resume to remain in the FAB 50?

The Oak Hill Academy-Chino Hills game at the 2017 Nike Extravaganza had been circled on the calendar ever since Chino Hills (Calif.) defeated FAB 50 No. 16 Mater Dei (Santa Ana, Calif.) in the title game of the 2016 Tarkanian Classic in December and repeated as Rancho Mirage Holiday Invitational champs a week later. If Chino Hills were to defeat Oak Hill Academy (Va.) at last weekend’s event, it was a good bet the Huskies would have an opportunity to tie California’s all-time winning streak mark of 66 games in the CIF Southern Section Open Division semifinals.

If didn’t seem the Huskies would another regular season foe that could knock them off, and it didn’t matter that No. 12 Oak Hill Academy has three losses after starting the season as the preseason No. 1 ranked team in the nation. According to long-time head coach Steve Smith, the Warriors had some chemistry problems early in the season but have been playing much better in recent weeks. Last Saturday night it all came together for the seven-time FAB 50 national champions, as the Warriors fought and clawed their way to a 96-91 win over previous No. 5 and defending FAB 50 champ Chino Hills to snap the Huskies’ winning streak at 60 games.

Iowa St.-bound Lindell Wigginton was the catalyst, as he willed Oak Hill back from a 14-point second quarter deficit with strong drives, clutch jumpers and a winning attitude that lifted his teammates. He finished with 35 points, including the go-ahead basket with three minutes remaining that gave Oak Hill its first lead of the game, 84-83. Wigginton scored 14 points in the final five minutes of the game.

“This was one of our program’s biggest wins considering the circumstances,” Smith said. “We’ve had some struggles this year and we still had to win the last three minutes after coming back.”

The reason Chino Hills, which lost its first game after 25 wins following a 35-0 season in 2015-16, was in command early was the play of shifty sophomore La’Melo Ball. He dazzled a sold-out crowd with long 3-pointers and blow bys, finishing with a game-high 36 points while adding nine rebounds and three assists. After Wigginton gave Oak Hill a 86-83 lead on a field goal, Ball tied it with his sixth 3-pointer of the game with 1:45 remaining. He cut Oak Hill’s lead to three (94-91) on his seventh and final 3-pointer with 11 seconds remaining, but Chino Hills wasn’t able to tie it after forcing a turnover on the ensuing out-of-bounds play.

So what’s the significance of Chino Hill’s loss? For starters, it will make it difficult for them to repeat as FAB 50 national champs, although they can still climb high and will need some help from other teams because the Huskies have tough post-season games coming up. It also hurt them in the rankings that Oak Hill Academy already had three losses. We kept Oak Hill No. 12 after its biggest win of the season, as the Warriors have only lost to teams ranked higher, and dropped Chino Hills eight spots to No. 13. Some national and local polls had Chino Hills ranked higher than No. 2 Sierra Canyon, but that team owns a win over No. 3 La Lumiere (which is arguably top-to-bottom the most talented team) and Chino Hills doesn’t quite have a win of that caliber. Not only that, Sierra Canyon already owned a win over Oak Hill Academy (which snapped that team’s 56-game winning streak), so the common opponent factor was going to come in handy — whether the Huskies won or lost.

Oak Hill Academy has lost to No. 11 Findlay Prep, so it only made sense to slide Montverde Academy (Montverde, Fla.) down three spots to No. 10 after it lost to St. Benedict’s Prep (Newark, N.J.) 50-49 in the title game of the St. James Invitational in Hagerstown, Md. Montverde Academy owns a win over Findlay Prep, as new No. 6  IMG Academy (Brandenton, Fla.) has enough quality wins to hop the Eagles in the FAB 50 despite the head-to-head loss. The four-point setback was IMG’s only loss, while Montverde now has four overall losses.

Bourama Sidibe, a 6-foot-10 senior, had 18 points, 12 rebounds and seven blocks in the big win over Montverde Academy. St. Benedict’s, which started off ranked No. 17 in the preseason, also got 11 points, seven rebounds and four blocks from 6-foot-8 sophomore Precious Achiuwa and 16 points from Matthue Cotton. St. Benedict’s breaks back into the FAB 50 at No. 37, one spot behind the Mt. St. Joseph (Baltimore, Md.) club it lost to. Mt. St. Joseph has split games with both of the teams it lost to so far this season and it both clubs keep winning, the gap between them and Montverde Academy in the rankings will close.

“We can beat anyone in the country…we are that talented, but I have a very young team and we are inconsistent,” said St. Benedict’s coach Mark Taylor.

Ironically, if Chino Hills had defeated Oak Hill it would have owned the nation’s current longest winning streak after previous No. 39 Federal Way (Wash.) fell from the ranks of the unbeaten with a 69-59 loss to Kentwood (Covington, Wash.) in the North Puget Sound League title game. After starting the season unranked after winning the 2015-16 WIAA Class 4A crown and finishing No. 26 in the FAB 50, Federal Way ran its winning streak to 63 games, but Kentwood had plenty of motivation. It lost to Federal Way 66-54 in last year’s state title game and held off the Eagles in this game with two late 3-pointers.

With the loss, Federal Way dropped from the FAB 50 because it doesn’t have a signature win it can point to in order to remain among the nation’s top 50 ranked teams. The team can bounce back in the Class 4A West Central/Southwest Bi-District Tournament, where it is the No. 2 seed behind top-seeded Kentwood.