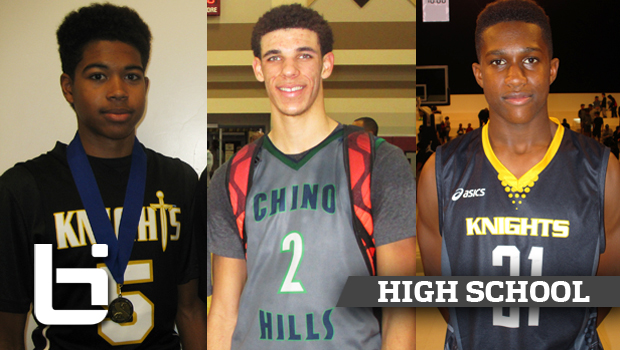 Storm Jonas wiped out games along the Atlantic Seaboard, but the action is heating up out West as FAB 50 No. 1 Chino Hills (Calif.) will ...(Read more)

Storm Jonas wiped out games along the Atlantic Seaboard, but the action is heating up out West as FAB 50 No. 1 Chino Hills (Calif.) will battle No. 7 Bishop Montgomery (Torrance, Calif.) on Saturday in the marquee game of the James Sampson Fairfax State Preview that will be live streamed by BIL. Two new teams join the top five, as Findlay Prep (Henderson, Nev.) was upset in a Las Vegas showdown, while DeMatha Catholic (Hyattsville, Md.) takes its first loss in the WCAC. This week’s newcomers are Moeller (Cincinnati, Ohio) and Steele (Cibolo, Texas).

We’re getting to a point in the season where unbeaten teams get rewarded for their season resume, while keeping in mind those that have played tough schedules — and soft ones.

We don’t overly penalize highly-ranked teams that have played tough schedules, and even though we don’t like to go against credible local rankings, looking at teams from a national perspective sometimes yields different results. Such is the case with the weekly Top 25 released by the Washington Post. AllMetSports went with Gonzaga (Washington, D.C.) as its top-ranked team after the Eagles went on the road last week and downed DeMatha Catholic (Hyattsville, Md.), 73-70, behind 30 points from guard Chris Lykes.

We decided to keep DeMatha in front of Gonzaga, but did drop the Stags one spot to No. 6 and moved up the Eagles five spots to No. 9. The reason we did that is Gonzaga has to stay behind Washington Catholic Athletic Conference foe St. John’s (Washington, D.C.), since the Cadets own an overtime victory over coach Steve Turner’s team. DeMatha defeated St. John’s in the first round of WCAC play, 59-57.

From a national perspective, Gonzaga’s resume includes an overtime loss to No. 45 and four-loss Roman Catholic (Philadelphia, Pa.), whereas the Stags’ other two losses are to No. 2 Montverde Academy (Montverde, Fla.) and No. 3 Oak Hill Academy (Mouth of Wilson, Va.). While DeMatha gets the nod this week, upcoming results in the ultra-competitive WCAC will eventually sort the rankings out.

The other top five team to lose last week was previous No. 4 Findlay Prep (Henderson, Nev.), which fell to bubble club Bishop Gorman (Las Vegas, Nev.), 77-71, in the Big City Showdown at South Point Arena just minutes from the world-famous Las Vegas Strip. Junior wing Charles O’Bannon Jr., the son of 1993 McDonald’s All-American and 1995 NCAA champion Charles O’Bannon, was the best player on the floor and finished with 25 points. The Gaels also overcame the foul trouble of McDonald’s All-American center Zach Collins to pull off the upset.

We considered Grant Rice’s team for one of the two open FAB 50 spots this week, but the Gaels haven’t yet overcome six losses to now unranked teams. They could in two weeks however, when they face top-ranked Chino Hills (Chino Hills, Calif.) at the Nike Extravaganza in Southern California. This weekend, Chino Hills will take on No. 7 Bishop Montgomery (Torrance, Calif.) at the James Sampson Fairfax State Preview in a game that will be live streamed by BIL. (For an extensive preview of that game, CLICK HERE.)

Findlay Prep has to drop further than DeMatha in the rankings because the Stags have played a significantly tougher overall schedule. The Pilots, however, must remain in front of a talented St. Benedict’s (Newark, N.J.) team it recently defeated at the Hoophall Classic.

The two new teams to crack the top five are No. 4 Atascocita (Humble, Texas) and No. 5 St. Anthony (Jersey City, N.J.). The reason the Eagles moved up two spots is they are five wins away from an unblemished regular season and it is extremely tough to make it through the UIL Class 6A state tournament unbeaten. Same thing goes for the unbeaten Friars and its four-time FAB 50 title-winning coach Bob Hurley Sr. Even with a talented group and a Hall of Fame coach, winning the New Jersey TOC without a blemish won’t be easy.