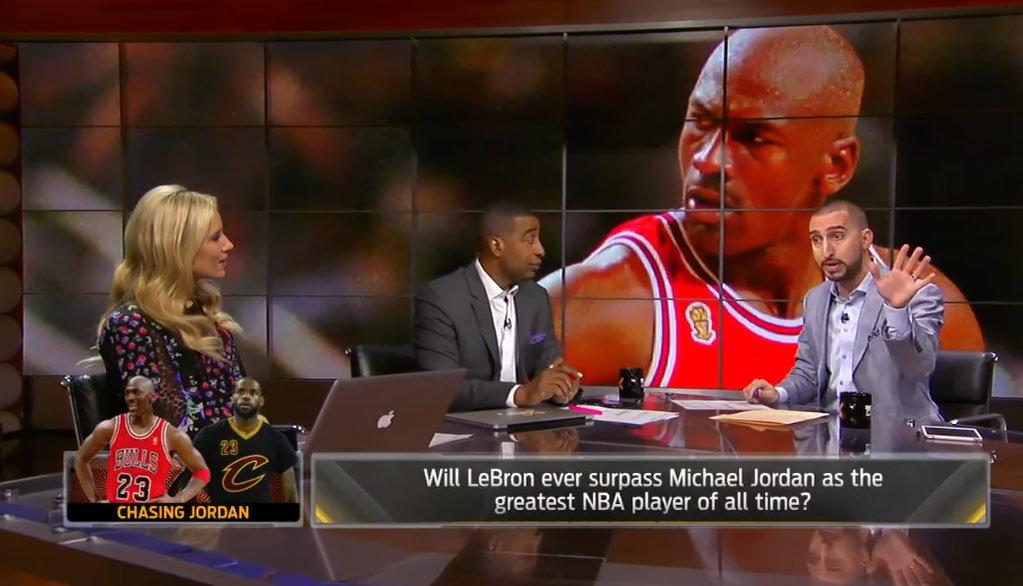 One day after pissing off a lot of Kobe fans by saying LeBron has already passed the Lakers legend and is second to only Michael Jordan on ...(Read more)

One day after pissing off a lot of Kobe fans by saying LeBron has already passed the Lakers legend and is second to only Michael Jordan on the GOAT chart, Nick Wright on “The Herd” pissed off a bunch of Jordan fans.

“We change history on him. We lie about what he did and didn’t do.” Said Wright, who went on to pick on Jordan for not winning a championship in 1995. I’m not going to say much about this argument here but I will bring up a little history and the fact that Jordan only played 17 regular season games during his return season and the Orlando team that beat his Bulls went on to the NBA Finals and were the favorite to win and probably would have won if it wasn’t for four missed free throws by Nick Anderson. I’ll also bring up the fact that Jordan absolutely destroyed the Magic when his 72-10 Bulls swept the Magic the following year.

I’ll also say that every NBA player I know, who played in the 80s and 90s, believes Jordan is and will always be the greatest. And 99% of players from those decades and a high % of players who only played against a Wizards’ Jordan (FYI. today is the anniversary of Jordan becoming the oldest player in NBA history to score 50+ in a game) also feels MJ is the GOAT. So these “liars” and “history changers” can make up and/or forget all they want, if his NBA competition unanimously says he’s the greatest then who am I to argue.