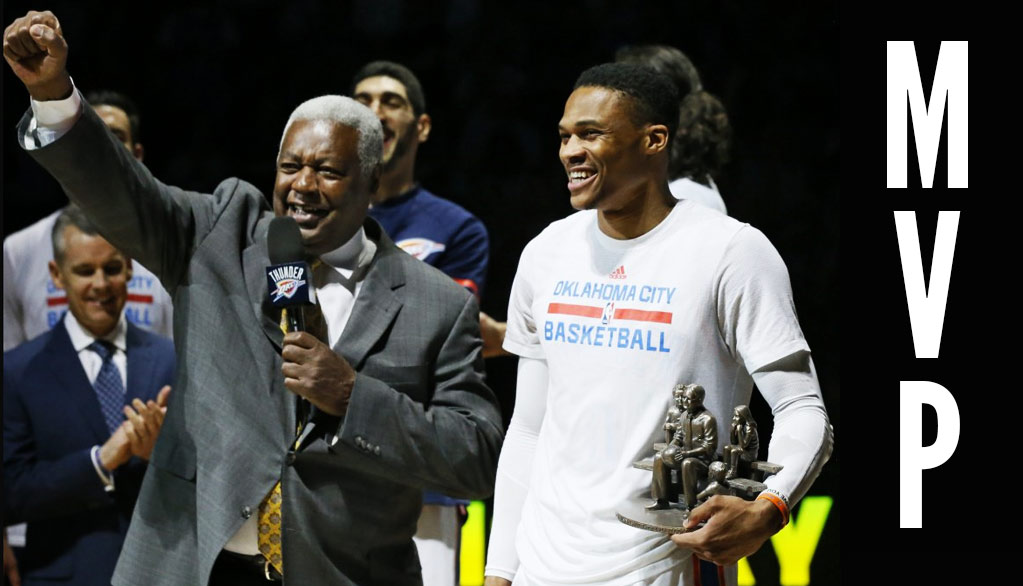 “I only have one more thing to say: M-V-P! “ Before the Thunder and Nuggets game, Mr. Triple-Double himself, Oscar Robertson, honored Russell Westbrook for breaking his ...(Read more)

Before the Thunder and Nuggets game, Mr. Triple-Double himself, Oscar Robertson, honored Russell Westbrook for breaking his record of triple-doubles in a season and becoming the second player in NBA history to ever average a triple-double.

“When Russell was on this journey, I felt that I just had to be here,” Said Robertson, who almost averaged a triple-double over the first five years of his career. “What he has done has been historic in nature. He’s played with passion and pride and ability. It’s is just outstanding what he has done and the way he did it.”

Westbrook only played half of the game and finished with 5 points on 2 for 10 shooting, 8 assists and 5 boards.  The Nuggets triple-double threat, Nikola Jokic, had 29 points, 16 boards, 8 assists and 5 blocks to finish his campaign for Most Improved Player.

THE BIG O DID WHAT

Everyone knows Oscar Robertson was the first to average a triple-double but did you know he almost did it for the half decade in his career?

As a rookie, he averaged 30.5 points, 10.1 rebounds and a league-leading 9.7 assists. No surprise he was the rookie of the year but he was also an All-Star and was just 1 assist away (23/14/9) from getting a triple-double in the All-Star game.

As an encore, Robertson not only avoided the sophomore slump, he became the first player to average a triple-double — a stat nobody cared about or acknowledged back then. It wouldn’t be until the 80s, when the Lakers PR department made the term popular to promote Magic Johnson, that people cared about triple-doubles — with these numbers: 30.8 points, 12.5 rebounds and 11.4 assists.

So, I’m not taking anything away from Russell Westbrook and his historic season but you have to tip your hat to what Robertson was able to do against his competition in the early 60s. And believe me, if triple-doubles was a thing worthy of getting back then, not only would he probably of averaged it every season for a while, stat-loving Wilt Chamberlain would have probably done it over a decade.