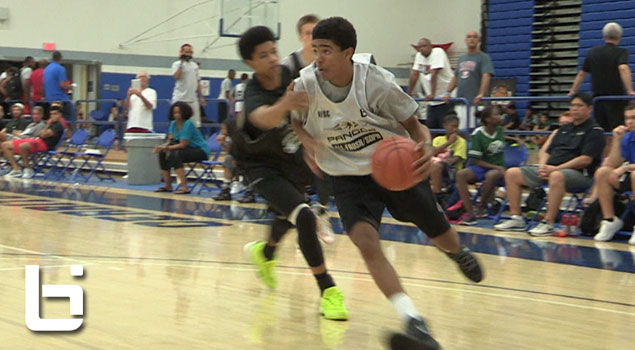 The four Pangos All-Frosh/Soph Camps serve as a national coming out party for many elite tenth and ninth graders across the country. For some, however, it’s ...(Read more)

The four Pangos All-Frosh/Soph Camps serve as a national coming out party for many elite tenth and ninth graders across the country. For some, however, it’s the experience of competing against high level talent in a camp setting that is invaluable. At the first Pangos All-Frosh/Soph Camp of 2015 held in Southern California, a select number of players such as Ben Baker and Kamaka Hepa thrived despite being in the setting for the first time. 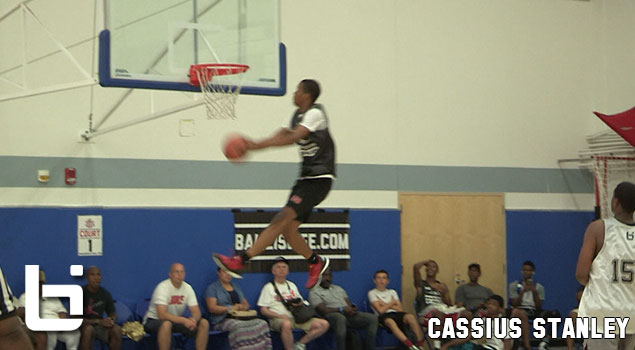 Norwalk, Calif. — One of the most refreshing aspects of the fall grassroots event period is to evaluate young players that may not have played in the big-time July viewing period events or/and those participating in a camp setting with other elite talent for the first time.

The Pangos All-West Frosh/Soph Camp at Cerritos College was the first experience in an elite camp setting for many in attendance and in the first set of games it showed. In those games, there were all-arm shots that didn’t come close to the rim, panicked over dribbling and some awkward movements. That is to be expected, but a selected few overcame the early jitters a lot quicker than others and settled into their game.

A couple of newcomers to the camp scene looked stood out and looked like cagy veterans on the first day of the two-day event. For 6-foot-2 sophomore shooting guard Ben Baker of Berkeley (Calif.), he came in with a chip on his shoulder and used that motivation plus his skill to impress the national contingent of scouts in attendance.

Baker is an aggressive offensive player who can finish around the rim with high efficiency and from both sides of the paint. Baker also makes the correct decision the majority of the time in the open court and excels at passing from various angles. Where he really makes his mark is on defense. Baker has great instincts in the backcourt and harassed many offensive players into turnovers before they even got the ball past the half court line. He also picked the pocket of highly-regarded 6-foot-4 freshman Elijah Scranton (Village Christian/Sun Valley, Calif.) in the open court.

“I came here to experience all the different competition, especially since I’m from Berkeley and people don’t really know me” Baker said. “It definitely gives me an edge. I’ve never been to stuff like this.”

Baker, who has been playing basketball since he was six years old, patterns his game after “stretch guards” such as Paul George and James Harden. He feels Berkeley’s team success will lead to individual accolades.

Kamaka Hepa, a 6-foot-9 sophomore forward who came to Southern California from Barrow (Alaska), made quite an impression considering his long trek with his high school coach all the way from the North Slope of America’s northernmost state. Hepa is a 4-man with solid face up skills who can attack either way. He is not the quickest of foot, but Hepa makes defensive players commit to him and has solid instincts around the basket. Hepa blocked some shots, has soft hands and knows how to finish once he gets his mitts on the basketball.

It will be interesting to see if Hepa shows even more on the second day of camp as he continues to get comfortable in the camp setting.

Like Baker, 5-foot-10 David Mixon of South Gate (Calif.) hopes team success will boost his individual profile. Mixon is not new to the Pangos Frosh/Soph Camp — he participated last year — and displayed marked improvement. That is always something evaluators like to see in a camp veteran.

Mixon’s improved physical conditioning helps his confidence and he also has an improved offensive skill set. Mixon has the ability to break down defenders off the dribble and either set up teammates or finish himself with a high percentage shot. Mixon also can get in a stance and defend. His play should help make the Rams one of the top contenders in the L.A. City Section Division 2 ranks.

Marlon Cunningham, a 6-foot-7 sophomore forward from Albuquerque (N.M.), was another relative newcomer to the Grassroots scene who turned heads his with his impressive play. Cunningham is a major factor around the basket with solid scoring ability and great instincts for the ball. He definitely made a positive impression and it will be interesting to evaluate his production level in one of the Cream of the Crop All-Star games.

Some of the standouts mentioned above don’t yet have the national reputations of some of the elites in the 2018 and 2019 class, but with continued development and production could one day be mentioned in the same breath as that small group of players.

How the new kids on the block compare with the established campers will further be determined on the camp’s second day.