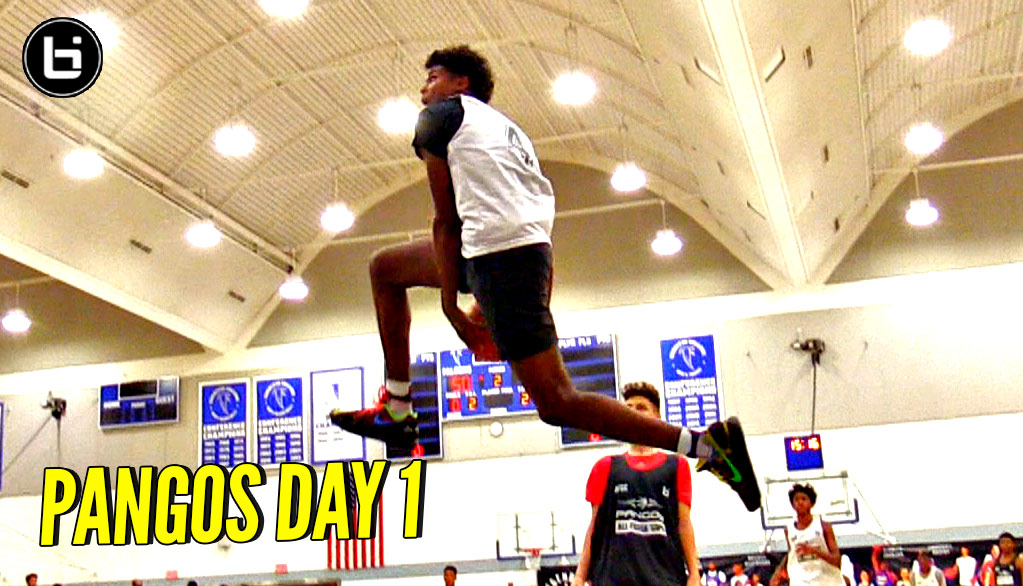 The 2017 Pangos Frosh/Soph Camps kicked off with the All-West edition and the first of four stops showcase many of the West’s best young talent, including ...(Read more)

The 2017 Pangos Frosh/Soph Camps kicked off with the All-West edition and the first of four stops showcase many of the West’s best young talent, including potential No. 1 sophomore Jalen Green and a plethora of others. Other standouts in one of the deepest Pangos Frosh-Soph Camps in the 15-year history of the event include freshman Zaon Collins, Drake Booker, and Myles Phillips and sophomores Robby Beasley, Dalen Terry and Nimari Burnett.

Norwalk, Calif. — A huge turnout of many of the better freshman and sophomore players on the West Coast descended upon Cerritos College to partake in the first of four Pangos Frosh/Soph Camps taking place this fall around the country. The camp has its origins in the West and in over 15 years, it’s hard to recall a better one in terms of depth of talent across the board than this version.

It’s certainly not hard to single out the explosive ability of Jalen Green, a 6-foot-5 sophomore (2020) wing from San Joaquin Memorial (Fresno, Calif.) who is challenging for title of the nation’s top-ranked sophomore. He was the top overall performer at last year’s camp and is well on his way to duplicating those efforts in 2017. Green never seems like he’s forcing the action, has a nose for the ball and good rebounding and passing instinct. Green also has the confidence and disposition of a player who walks in the gym and thinks he’s the best. It’s a noticeable difference in a year’s time.

While Green is explosive, Josh Christopher just might be the most explosive wing-type in the entire camp. The 6-foot-4 sophomore out of Mayfair (Lakewood, Calif.) who led Cal Supreme to the 17U Big Foot Hoops Las Vegas Classic title tore down the rims on Saturday with explosive finishes with both hands. Christopher has rapidly turned into a McDonald’s All-American prospect in the 2020 class and the only thing separating him and Green right now is the mechanics and drifting on his jump shot.

Last weekend Las Vegas was the sports capital of the world as Canelo Alvarez and Gennady Glolovkin fought for the Middleweight Championship of the World and in the near future the city could be the capital of the grassroots basketball world. Sin City has arguably its deepest crop of players ever in one class in 2021 and 2020 is way above average, too.

The table setter is 5-foot-11 freshman point guard Zaon Collins of Bishop Gorman (Las Vegas), who put on a display of basketball wizardry with his passing and feel that would make Dr. Naismith proud. Collins sees the game a play or two ahead of most of his peers and can set himself up by getting in a stance and playing instinctual defense. It helping him in this camp setting that he’s playing alongside some of his teammates at Bishop Gorman and on the Vegas Elite travel ball club. Combining that IQ and skill with the familiarity, Collins led his team to two wins in front of a large contingent of supporters on the first day of camp.

How high Collins is ranked in the 2021 class depends on his ability to develop a deep jump shot and how many more inches he springs up. He has been compared to a wide variety of guards including Kenny Anderson (1989 Mr. Basketball USA), Art Lee (Stanford) and B.J. Armstrong (NBA World Champion), among others, and has an excellent chance to be the best point guard ever for the perennial FAB 50 power that is Bishop Gorman basketball.

Other high school and travel ball teammates that have made a positive impact at the camp are 6-foot-3 freshman shooting guard Will McClendon, 6-foot-3 sophomore combo guard Noah Taitz and 6-foot-8 freshman power forward Isaiah Cottrell. McClendon can really get after it with his physicality, Taitz can finish with authority and has a sweet square up shooting stroke while Cottrell is oozing with potential.

The Vegas player who made the biggest among other programs was Collins’ old Faiss Middle School teammate — 6-foot-2 freshman (2021) shooting guard Drake Booker from Durango (Las Vegas). The slashing guard excels in a camp setting with his athleticism and fearless attitude and has done a good job in his transition from more of a wing-type in middle school to a ball-handler at the high school level. When he’s hot from the outside, he can be as dynamic as any guard there is from Nevada in his class. That’s exactly what happened Saturday, as Booker was stroking from long range in his first game and heated up down the stretch in the second. He got into a spirited one-on-one battle with 6-foot-4 sophomore shooting guard Jaylen Clark of Centennial (Corona, Calif.), where he displayed a classic dual threat attack. Booker used his foot speed to blow by Clark on a few occasions and if he backed off, the Durango freshman nailed jumpers.

Clark is explosive around the basket and in transition, but must continue to work on changing directions and striding while pushing and attacking with the ball in his hands.

We’ be remiss if we didn’t also mention 6-foot 2022 point guard Richard “Pop Pop” Isaacs, a Vegas resident who defenders simply can’t stay in front of. Isaacs is one of the camp’s fastest guards end-to-end with the ball in his hands and knows how to make the proper play under duress and at full speed. He had his deft passing game working early and then went into scoring mode in his final day one game.

Zion Collins and Isaacs were just two of the many point guard standouts, which included in no particular order, 5-foot-10 freshman Jaden Byers from Centennial (Corona, Calif.), 5-foot-10 freshman Kimo Ferrari of St. Augustine (San Diego, Calif.), 6-foot-1 sophomore Jordan Montgomery of Rancho Christian (Temecula, Calif.) and 5-foot-11 Myles Phillips of Franklin (Seattle, Wash.). Phillips was the most impressive of the lot with his ability to get in the key and make the right scoring or passing play. When his size and strength begin to catch up to his ability, Phillips will be one of the top point guards in his class on the West Coast, and perhaps nationally.

Other day one standout guards who can play both spots were 6-foot sophomore guard Robby Beasley of Dunblin (Calif.), 6-foot-3 sophomore Nimari Burnett of Prolific Prep (Napa, Calif.) and 6-foot-5 sophomore Dalen Terry of Corona Del Sol (Tempe, Ariz.). Beasley displayed improved speed and a solid crossover while playing under control. Burnett is simply explosive and can get it done in tight quarters. He doesn’t need alot of space to operate and is unselfish. Terry can score like a major college wing and handle well enough to handle point guard duties and see over the defense to make positive plays. He has an excellent chance to develop into a 6-foot-7 play-making guard.