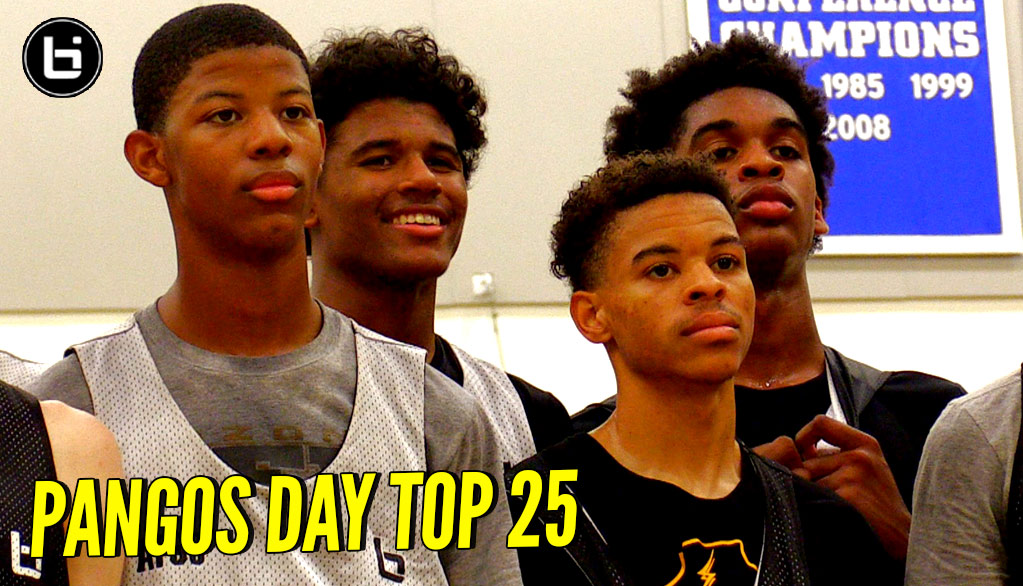 One of the most talent-laden Pangos All-West Frosh Soph Camps ever concluded on Sunday with the two Cream of the Crop All-Star Games and when the ...(Read more)

One of the most talent-laden Pangos All-West Frosh Soph Camps ever concluded on Sunday with the two Cream of the Crop All-Star Games and when the dust settled, it was sophomore wing Josh Christopher who emerged as the most impactful play in the top game. The Mayfair (Lakewood, Calif.) product led his team to victory with 20 points. Other day two and all-star game standouts included sophomores Jalen Green, Evan Mobley, Dalen Terry, Johnny Juzang, and Obinna Anyanwu.

With the sheer numbers of players and abundance of talent present at the 2017 Pangos All-West Fr-Soph Camp, the top Cream of the Crop All-Star game reserved for the camp’s top players would reveal which players were most competitive, consistent and could get out of their comfort level to perform regardless of the environment or whom was assigned to each team.

The player who best foot that bill in the above-mentioned categories was 6-foot-3 wing Josh Christopher, a sophomore at Mayfair (Lakewood, Calif.) who is the younger brother of a professional player. That player is former Mayfair, Dominguez (Compton, Calif.) and CAL product Patrick Christopher, who just so happened to be on hand to coach in the Cream of the Crop All-Star Game — on the team opposite his youngest brother.

Patrick Christopher did admit it fired up his brother, who led the Black team to a 112-85 victory over the White team by scoring 20 points, including four 3-pointers, to go along with four rebounds and two assists. More important, Christopher was the most impactful player on the top line shift, as he was able to dominate game action and lead his team to a sizable lead when he was on the floor. He also benefitted from an pre-game injury to Cream of the Crop selection Robbie Beasley (a 6-foot sophomore from Dublin, Calif.) which enabled Christopher to get in an extra line shift, whereas the White team had an even amount of players for each substitution.

Named co-MVP of the top all-star game was the camp’s top overall big man: 6-foot-10 Evan Mobley of Rancho Christian (Temecula, Calif.). The sophomore post continues to develop on both ends of the floor, as his overall skill level and coordination is rapidly catching up to his height. He’s a finesse player who can finish well around the rim and can keep defenses honest with his improving face up game. Once Mobley learns how to better protect the rim, he has an excellent chance to finish as a Top 25 player in the national Class of 2020.

Jalen Green, the fantastic sophomore talent out of San Joaquin Memorial (Fresno, Calif.) was matched up opposite of Christopher on the White team and finished with eight points, five rebounds and three assists. He certainly did not play poorly, but was unable to be the difference-maker for his team in terms of +/- while on the floor. Green has a big target on his back and is still the player on the West Coast other 2020 kids are gunning for in terms of national recognition. Last year he was the top overall performer and did enough to be named co-MOP of he camp along with scoring machine Johnny Juzang, a 6-foot-6 sophomore wing from Harvard-Westlake (North Hollywood, Calif.).

Juzang is a volume scorer who had some excellent outings in this camp, but has to continue to work on using his body to finish through contact and see his teammates’ open lanes. This would help take his considerable talents to the next level. He had 10 shot attempts in the all-star game for the White team and finished with 9 points.

Terry and Cottrell used this camp to make favorable impressions with the national scouts in attendance. Terry hasn’t always been a tough customer, but he’s beginning to grow into his body and his instincts and attention to physical conditioning is starting to pay dividends on the boards. He was the best rebounding guard in camp and his offensive reads in the open court have always been his strong suit. With a strong sophomore season at Corona Del Sol, he’ll be one of the most watched players nationally on the spring 2018 grassroots circuit.

Cottrell is starting to gain confidence and is a versatile scorer with good range for his size. He’ll likely continue to grow his overall game and just might be one of the best long-term prospects in this entire group.

Of the players who played in the second all-star game who were probably most deserving of top billing, the name most often thrown around was sophomore big man Fallou Niang from Tri-City Christian (Chandler, Ariz.). The 6-foot-9 big man can run the floor and was arguably the camp’s best shot blocker.

Among players not chosen for either all-star game, the one player who stood out to us was 6-foot-3 sophomore Donovan Yap from Arbor View (Las Vegas). Yap is unselfish, has the ability to get to the basket in the half court and excels in transition.