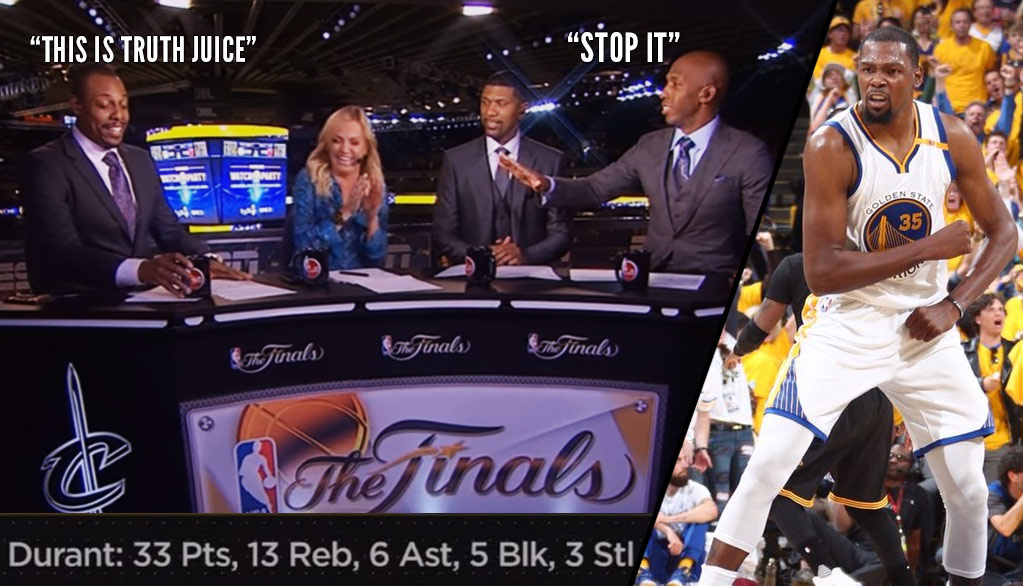 Kevin Durant was great in Game 2; 33 points, 13 boards, 6 assists, 5 blocks and 3 steals great. But, many will tell you the best player in the game and league was and still is LeBron James, who had his 8th career finals triple-double (29/14/11). Apparently, Paul Pierce isn’t one of those people.

During a post-game talk about the game, The Truth was ready to give the title of “best player in the world” to KD.

The statement had Michelle Beadle cracking up and questioning what was in his drink and Chauncey Billups doing his best impersonation of Kanye interrupting Taylor Swift at an awards show.

As drunk as Pierce was off what he called “Truth juice,” he did say Jeff Van Gundy was just being “emotional” when asked about Gundy saying Curry and Durant are the best duo ever. The way-too-soon statement was even brought up to the duo by Doris Burke after the game.

If you feel like having this conversation, here’s a video with some great NBA duos. Worth noting, the video has Shaq and Kobe as the best Lakers duo of all-time although many, myself included, will argue the duo of Kareem and Magic Johnson are better. Regardless of which LA duo you want to go with, everybody should agree, for right now, both should be ranked higher than KD and Steph Curry.