Officer White was recently dispatched to a call of kids playing basketball “loudly” in the streets. In the evening. Having fun. Not committing crimes. Let’s see how he handled it.

I had a basketball goal at my last house and every day a lot of the kids in the neighborhood, or maybe even another neighborhood, would come by and just start playing in my driveway. They were loud, they made my dog bark non-stop, they would hit my windows and garage which made it hard for me at times to do my work.  But, I knew the kids were better off shooting hoops in the neighborhood then getting in trouble somewhere else. So every once in a while I would take a break, lace up the sneakers, play some 21 with the kids and then lower the rim to 9 and show them my Vince Carter impersonation.

Yesterday, the Gainesville Police Department posted a video showing a police officer, Officer White, responding to a call of “kids playing basketball loudly in the streets.”  He walks up to the kids and lets them know that 911 was called and that he has no problem at all with what the kids are doing. He then takes a shot and then plays against two of the kids. Next thing you know, there’s a whole group of kids playing hoops and staying out of trouble.

The video ends with Officer White throwing down a dunk and asking the kids if they play everyday because he might be bring some “backup.”

That’s awesome! And so is this message from the Police department: So…if you call GPD to complain about kids being kids…This is how Officer White is going to handle it. Were’s going to let kids be kids. We are going to focus on the ones that commit crimes.  #HoopsNotCrime. 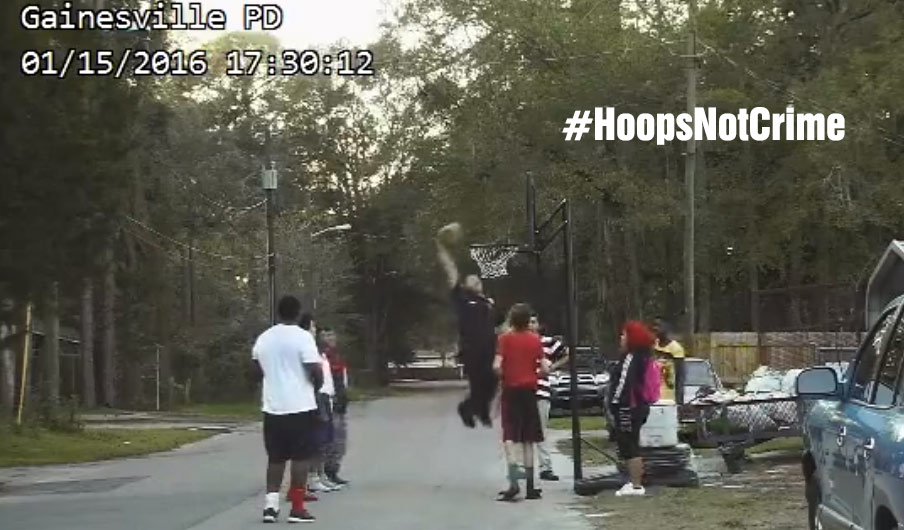