The city of brotherly love showed absolutely no love and no chill for a few guests of the 76ers on Wednesday.

The first on the list was singer Sevyn Streeter. Minutes before she was supposed to perform the National Anthem, she was told she was getting the ax because she was wearing a “We Matter” jersey .

“I was angry, extremely, extremely angry, and disappointed and honestly brought to tears by all of it. It broke my heart,” she said to the AP. “Honestly, I was very excited about being able to perform the national anthem. I was really looking forward to that.”

I’m sure she was even more upset when she heard she was replaced by a 76ers cheerleader. 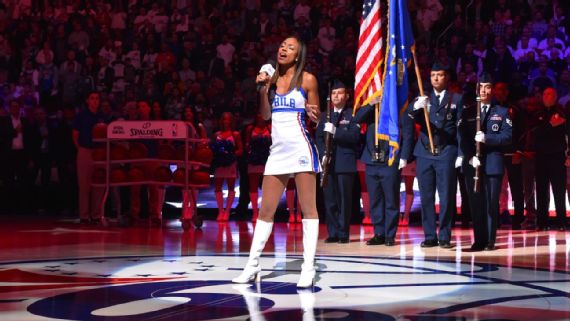 Midway through the first quarter, an Allen Iverson jersey wearing 76ers fan got the boot after yelling “fuck you” and flicking off a stunned looking Russell Westbrook. The crowd cheered and high-fived the courtside fan as he was escorted out.

After the game, Westbrook had the following to say about the fan encounter.

“Uh yeah, I know, that’s crazy, right?” Westbrook said. “I turned a new leaf, though. I leave that alone, because that cost me $25,000 last time. The fan, he’ll be all right. They can say whatever they want to the players and do what they want, but my job is to play basketball, and that’s what I do.”

Teammate Steven Adams had an amusing response when asked how he felt Westbrook handled the situation.

He did rack up 32 points, 12 rebounds and 9 assists in the win, which made fantasy owners and a few fans in the crowd with signs saying, “Westbrook 1-0, Durant 0-1” happy.

The third person to get the boot was “rapper” Desiigner. When the sellout crowd realized the shirtless performer was pulling a Milli Vanili, they booed him off the court.

One person who got plenty of love from the city of brotherly love was rookie Joel Embiid. Fans even chanted, “MVP, MVP, MVP” in his 20 points in 22 minutes debut.