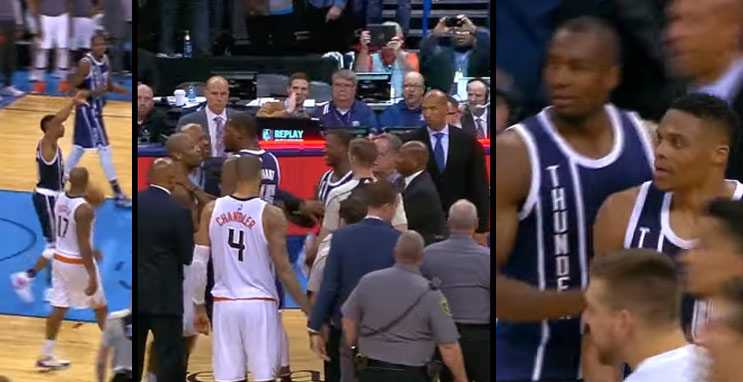 If dropping 36 points, 12 assists and ending the game with a block at the buzzer wasn’t enough to piss off the Phoenix Suns, after the ...(Read more)

If dropping 36 points, 12 assists and ending the game with a block at the buzzer wasn’t enough to piss off the Phoenix Suns, after the buzzer, Westbrook picked up the ball and then gave the crowd a thumbs down signal which apparently wasn’t appreciated by P.J. Tucker.  The two exchanged some words before Serge Ibaka grabbed Westbrook and a smiling Kevin Durant and Dion Waiters talked with Tucker at mid-court. The Suns staff then pulled Tucker away from the conversation which I assume wasn’t “happy new year” exchanges.

If the Suns want to be mad about Westbrook, they should be most mad at what he did to them in the first half of the game: 21 points on 8 of 9 shooting along with 8 assists.

“It was a good night for him,” Durant said of Westbrook. “He was just efficient. He had the ball in his hands and made good decisions. He took control of the game and made shots. That’s what he does, he’s a scorer. He’s a guy that sets everybody up. He was big tonight.”

The Suns are probably also a little pissed about ending 2015 with 7 straight losses and knowing they are going into the new year without Eric Bledsoe.