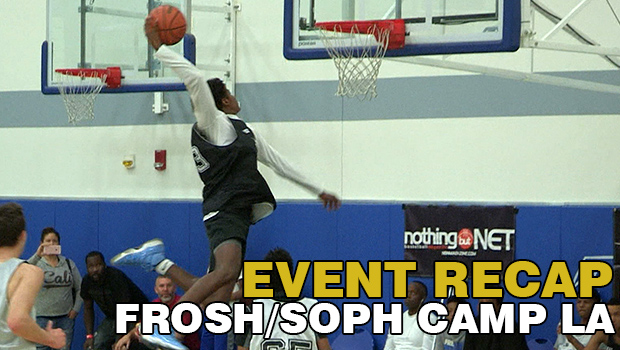 The 2016 Pangos All-West Frosh/Soph Camps concluded on Sunday with the Cream of the Crop Top 30 and 60 games and when it was all said and ...(Read more)

The 2016 Pangos All-West Frosh/Soph Camps concluded on Sunday with the Cream of the Crop Top 30 and 60 games and when it was all said and done four players were named camps MVPs: Among sophomores, forwards Jaime Jaquez and Darren Jones bagged co-MVPs honors and among freshman, wings Jalen Green and Johnny Juzang were named best of the lot. The camp also featured some sleepers who broke out and made a name for themselves on a national stage.

Norwalk, Calif. — One of the keys in the development of young players is consistency and during an atmosphere such as a showcase camp, it’s easy for participants to get sidetracked and fall into the trap of individualism or showmanship. It happened to some of the first day standouts at the Pangos All-West Frosh Soph Camp on the second day. With that in mind, the two most consistent players in terms of skill, production and team play were also arguably the two best players in camp: 6-foot-6 forward Jamie Jaquez, a sophomore (2019) out of Camarillo (Calif.) and 6-foot-4 wing Jalen Green, a freshman (2020) out of San Joaquin Memorial (Fresno, Calif.).

That duo never wavered in their approach or playing to their strengths and it showed down the stretch when some of their peers faded or lost focus. Jaquez, who had the most skilled scoring package of any of the 180 campers, and Green, who consistently played all 84 feet of the court better than anyone else, didn’t have big scoring games in the Cream of the Crop Top 30 All-Star Game, but it hardly mattered. That duo had already puts its stamp on the camp.

Two of the camp’s top performers on Sunday closed out with strong performances in the Cream of the Crop Top 30 Game for the wining black club. Johnny Juzang, a 6-foot-6 shooting guard out of Harvard-Westlake (North Hollywood, Calif.) and Jarod Lucas, a 6-foot-3 shooting guard out of Los Altos (Hacienda Heights, Calif.), both netted 13 points in their team’s easy 100-54 victory. Juzang had some mesmorizing scoring outputs throughout the camp and was shooting the ball well from the outside. He dabbles with the point guard position, as does Lucas, but both their strengths offensively are clearly scoring the basketball. Lucas’ game continues to evolve, as he’s toned his body, grown over an inch and improved his explosiveness. Lucas also had arguably the quickest release on his jumper of any camper.

Both Mobley and Jones scored 11 points in the Top 30 game, and the latter was one of the most explosive players in attendance. Jones’ offensive repitriore is evolving, as he displayed an improved shooting stroke. He has a tendency to throw up wild shots once in a while, but considering his football background (he’s a D1 wide receiver prospect) and experience (or lack thereof), Jones’ upside is as big as any camper in attendance. Mobley’s older brother Isaiah, a 6-foot-8 2019 forward from Rancho Christian, was one of the top performer’s at last year’s Pangos All-West Frosh/Soph camp, but this year little brother stole some of his thunder with his oozing potential and shot-blocking ability. The younger Mobley is agile and has excellent instincts and let the game come to him over the weekend and it paid off in the end.

Dion Stroud, an explosive 6-foot-6 2019 wing out of San Joaquin Memorial (Fresno, Calif.), had 12 points for the white team while Sedrick Hammonds chipped in 10 points. Hammonds, a 6-foot-2 wing out of Clark (Las Vegas, Nev.), was one of the best pure athletes in attendance with great defensive instincts and the ability to get by defenders on the wing. Hammonds definitely proved he belonged in the top game and is one to track on the West Coast this upcoming high school basketball season.

Smith was especially impressive with his motor and offensive rebounding ability. He played hard every possession and scored when he had openings around the basket without forcing too much. Smith’s ability and production will be a welcomed bonus to a Fairfax team that is perimeter-oriented and hopes to win the L.A. City Section Open Division title next March. The perimeter players include junior point guard Jamal Hartwell (who was in attendance supporting three of his Lions’ teammates) and a pair of sophomore guards in 5-foot-11 Ethan Anderson and 6-foot-4 Bobby McRae III. The latter is more of a wing at this time, but is cut out to be a college shooting guard. McRae is not as highly-regarded in terms of state and national reputation as Anderson, but he actually was just as productive and did more to help himself this weekend than his backcourt mate.

McRae’s activity level led to numerous positive plays and he made the correct reads with the ball in his hands. Anderson was one of the top overall guards in attendance and did nothing to hurt his reputation as one of California’s top prospects in the Class of 2019. Anderson simply overpowers or blows by guards who attempt to jump in his way, although he could finish better attacking left and being less reliant on spinning back to his strong side.

The most competitive and skilled player in the Cream of the Crop Top 60 Game was 6-foot guard Josh Christopher from Mayfair (Lakewood, Calif.). He led all scorers with 19 points. His older brothers are Caleb, a junior-to-be at Mayfair, and Patrick, who also played at the school before moving on to Dominguez (Compton, Calif.), CAL and the NBA.