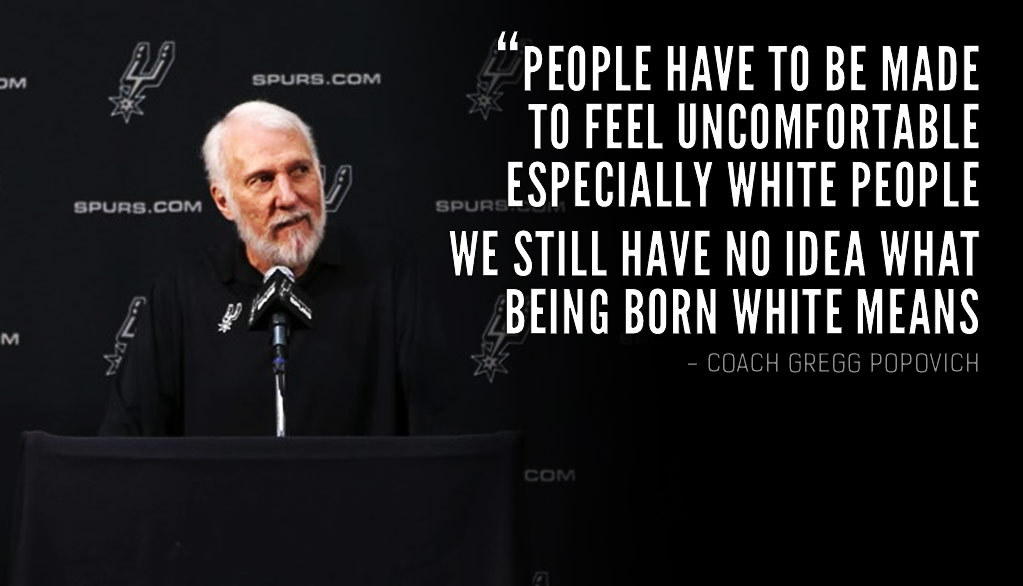 Before Monday’s manic media day, Spurs coach Gregg Popovich was already considered one of the, if not the, most well respected coach in the league. After ...(Read more)

Before Monday’s manic media day, Spurs coach Gregg Popovich was already considered one of the, if not the, most well respected coach in the league. After the former Air Force Academy graduate went off on Donald Trump for uninviting Steph Curry to the White House and discussed racism during a 20-minute press conference, he earned the respect of a lot of people who could not care less about the Spurs and the sport of basketball.

“Our country is an embarrassment in the world,” Popovich said. “This is an individual that when people held arms during games, [he thought] that they were doing it to honor the flag. That’s delusional. But it’s what we have to live with. You’ve got a choice: We can continue to bounce our heads off the walls with his conduct, or we can decide the institutions of our country are more important, people are more important, [the] decent America we all have and want is more important — get down to business at the grassroots level and do what we have to do.”

“We do live in a difficult time. We all know why [and] where the source is, where a lot of the division comes from,” Popovich said. “To dwell on that is the wrong way to go. [It’s] so obvious now, it is boring. The childishness, the gratuitous fear-mongering and race baiting has been so consistent. It’s almost expected. [The] bar has been lowered so far, I think it’s more important to be thinking about what to do, more organic, [grass]roots-based level.

“Think about the efforts to restrict voter registration, comments that demean cultures, ethnic groups, races, women. What can be done in an organic way to fight that? We know where the power is. We know the racism that exists. It has gone beyond that to the point where I’m more worried and confused by the people around the president.

“These are intelligent people who know exactly what is going on, who were basically very negative about his actions. But now it’s condoned. We saw it this weekend about people who should be fired [for protesting during the national anthem]. I wonder what the people think about who voted for him, where their line is. Where does the morality and decency kick in?

“I understand very well, they didn’t like their choice economically. A lot of people had a problem. He was the right guy at the right time to tap into that mood. People overlooked one hell of a lot to pull that trigger in that direction. They wanted change, they felt ignored. But at what price? One wonders what is in their heads. Have they come to the conclusion they had the wrong vehicle? Might have had good ideas, but someone else had a little bit more decency about how they approach other people and other groups might have [been] served better.

“That’s what I worry about in the country, wonder about if you live here. I just heard a comment this morning from a NASCAR owner and Mr. [Richard] Petty that blew me away, just blew me away. I think these people have been enabled by an example that we’ve all been given.”

“I’m an individual. I live in this country. I have a right to say and do what I want. It has nothing to do with my position,” Popovich said. “Obviously, race is the elephant in the room, and we all understand that unless it is talked about constantly, it is not going to get better. People get bored, ‘Oh, is it that again? They are pulling the race card.’ Because it’s uncomfortable, there has be an uncomfortable element in the discourse for anything to change. Whether it is LGBT, women’s suffrage, race, [it] doesn’t matter. People have to be made to feel uncomfortable; especially white people. We still have no clue what being born white means.

“If you read some of the recent literature, there is no such thing as whiteness. But we made it up. Not my original thought, but it’s true. Because you were born white, you have advantages systemically, culturally, psychology there. They have been built up for hundreds of years. Many people can’t look at it. [It] can’t be something on their plate on a daily basis. People want their status quo. People don’t want to give it up. Until it’s given up, it’s not going to be fixed.”