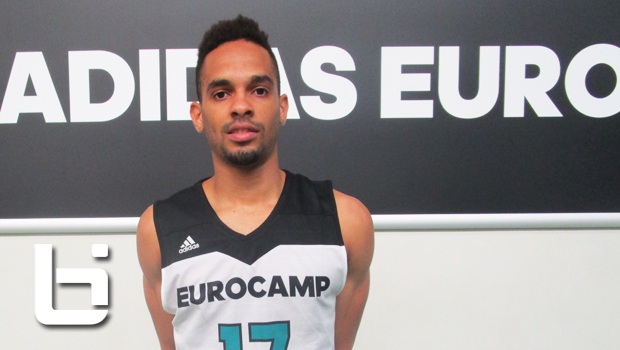 The adidas Eurocamp, now in its 14th year, kicked off in Treviso on Friday and the United States Select Team found out it has plenty of ...(Read more)

The adidas Eurocamp, now in its 14th year, kicked off in Treviso on Friday and the United States Select Team found out it has plenty of work to do if it wants to leave Italy with a victory after last year’s U.S. team went unbeaten. The U.S. team, comprised of mainly seniors-to-be, fell to the France 20U by a wide margin. The U.S. players and coaches, however, got some valuable on-court experiences that will help down the line.

Note: Check back later for video highlights from day one at the adidas Eurocamp

The adidas Eurocamp is an excellent one-stop shop destination for NBA franchises with regards to international players and scouting, with many top draft-eligible European prospects and future NBA Draft hopefuls in attendance. The event has incorporated an American team of high school-age players the past four years and this year’s team is likely to get the most out of the experience.

Some of the 11 Americans have a chance to be high school All-Americans next season, but it’s not a star-studded group. It’s more blue-collar and the U.S. Select Team will have its work cut out for it on Saturday when it faces the European All-Star team, which defeated the 20U Ukraine team, 75-59, in its first game.

The Americans quickly fell behind the France 20U team, as the Frenchmen hit a barrage of 3-pointers, took a 12-3 lead and led 30-11 after one quarter. France took a 51-23 halftime lead, before the Americans fought back in the third quarter (66-42), only to see the lead grow again in the final period with a 86-59 final score. The French (with a roster including 10 players who were born in 1996) made 9-of-30 3-pointers, but their dominance was much more than shooting. The U.S. Select Team (with a roster including five players born in 1999, five in 1998 and one born in 1997) had trouble closing out on the shooters because the French screens were much more physical and precise that what the Yankees are used to seeing in varsity high school and 17U competition.

The France 20U team also displayed good offensive ball movement and exploited the Americans on back doors, were more schooled in executing with a 24-second shot clock and made the U.S. work hard for even a decent look on each possession. As Euro All-Star Team coach Chris Finch (the 2010 NBA D-League Coach of the Year) explained, many of the Europeans at this event have played together for a long period of time and some already have plenty of experience against professionals. It showed in the American’s first game of the event after one practice session together.

UCLA-bound point guard Jaylen Hands (Balboa School, San Diego, Calif.) led three U.S. Select Team players in double figures with 14 points. The others were 2017 shooting guard A.J. Oliver (Daniel, Central, S.C.), who made three of the U.S.’ four 3-pointers and finished with 11 points, while 2017 small forward Usher Jordan (Wheeler, Marietta, Ga.) made all seven of his free throws and only missed one shot from the field to also finish with 11 points.

Hands had seven of the U.S.’ 23 turnovers and while he is likely the American’s most talented backcourt player, he was humbled by the experience. He realized just because he beats his defender, getting a basket is anything but easy in the adidas Eurocamp environment. The older, stronger, and more experienced Frenchmen recovered much better than what Hands and the other guards are used to seeing, they collapsed lanes and were even physical with the Americans after the pass or shot. Nothing was easy for the Americans and they are going to have to come together in practice, make a concerted effort to not be knocked off balance while handling the ball and look to feed the post players in order to win its second game.

“Our post-game talk was about communication and focus,” said Kerry Keating, the American coach who previously was the head man at Santa Clara University. “We talked about how important the weight room is in college and beyond. This is a tremendous opportunity for these kids…real life competition to learn what it takes.”

There were two other games on the slate on the first day at adidas Eurocamp and here are a few other foreign players that caught our attention.

Kenan Karahoizic (6-10 PF, Spain, 1996): He is not draft eligible, but one to watch for in the future. He has a nice all-around game with a versatile skill package. His outside shot keeps defenders honest and he was finishing well in his team’s 54-57 win in a game featuring players from various countries. Karahoizic scored a game-high 13 points and had six rebounds.

David Michineau (6-3 PG, France, 1994): This draft-eligible guard was the most explosive lead guard on the first day of camp, and showed enough to perhaps warrant serious second round draft consideration. Michineau has good size and the defensive ability and aptitude to defend both guard positions at a high level. He doesn’t let defenders dictate where he wants to get on the floor and has a solid (not spectacular) outside shot. He had 12 points and four assists in the European All-Stars’ 75-59 win over the 20U Ukraine National team. Michineau is not fostering super high hopes of getting drafted because he’s been around as a role player for many years and doesn’t get “the hype” as he put it.

Sviatoslav Mykhailiuk (6-6 SG, Ukraine, 1997): This big shooting guard plays at the University of Kansas and was the most impressive player on the 20U Ukraine National team. He does a good job of moving without the ball and has a nice solid, square jump shot. He’s still only 18 years old and already has two seasons of D1 ball under his belt, but is not quite ready to enter the NBA Draft. He is showing signs of improvement and finished the game with 19 points (3-of-9 3-pointers), five rebounds and two assists.