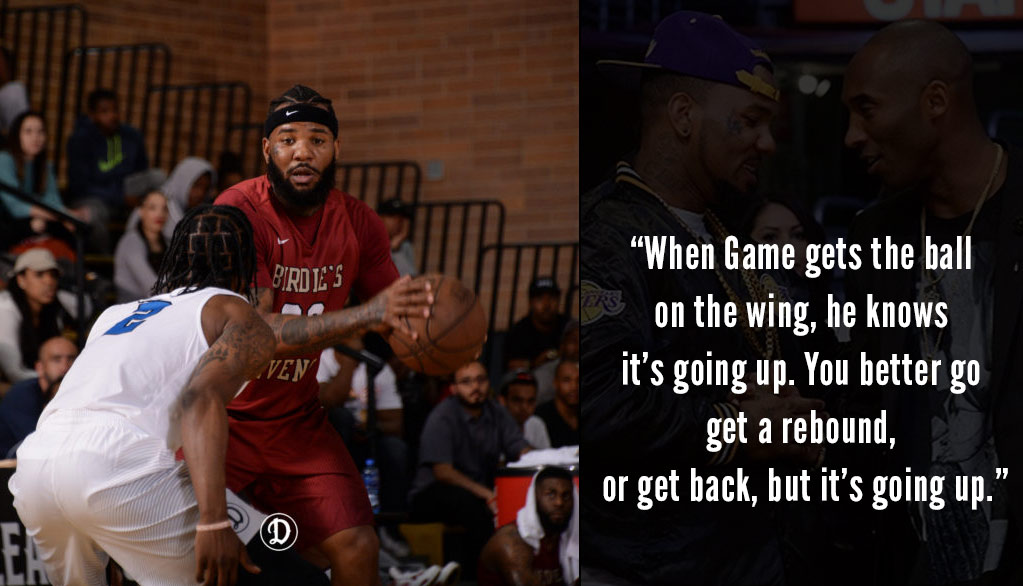 Rapper The Game is back at the Drew and looking for revenge with his new team: Birdie’s Revenge! The team – I assume is named after ...(Read more)

Rapper The Game Returns To The Drew League With A New Team: Birdie’s Revenge

Rapper The Game is back at the Drew and looking for revenge with his new team: Birdie’s Revenge! The team – I assume is named after Tupac’s character in the film “Above The Rim” – features Tim “Bugatti” Johnson and Frank “Nitty” Session and are off to 2-0 record after the first 2 weeks.

Here’s a pretty amusing write-up about The Game’s game by Aaron Williams of the Drew.

From the outset, one thing was clear: Birdie’s Revenge is Jayceon’s team. He played nearly all 32 minutes of the first two games of the season, which can both help and hurt his team. If you can’t say anything else, he’s pretty entertaining to watch, from his unorthodox, foot-shuffling 3 point shooting form, to attempting a bounce-pass alley-oop that didn’t quite connect early in the first quarter. His teammates and coach took it in stride; Session noted that when Game gets the ball on the wing, he knows “it’s going up. You better go get a rebound, or get back, but it’s going up.”