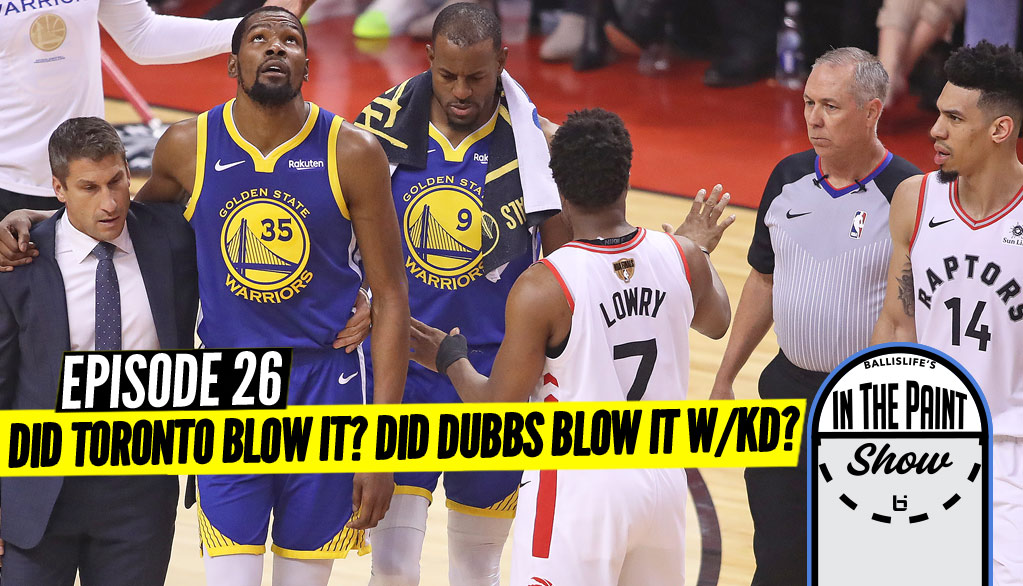 In episode No. 26 of our  "In The Paint Show," Ron and Dev go in hard on the 2019 NBA Finals, which heads to Game 6 with Toronto leading 3-2. Did the Raptors give away the series in Game 5? Did the Warriors mortgage their future by playing KD?

Raptors, Warriors Now a SERIES “In The Paint” Podcast GOES IN On Finals!

In episode No. 26 of our  “In The Paint Show,“ hosts Ronnie Flores and Devin Ugland go in hard on the 2019 NBA Finals, which will head to a game six with the Toronto Raptors one win away from its first NBA championship. Toronto led game five, 103-97, with just over three minutes remaining and let the game, and the championship, slip away. Did Toronto head coach Nick Nurse call a timeout at the wrong time? Did the team simply choke in the final minutes, or was it great Warriors shooting? Was Toronto shooting too many 3-pointers? The fellas GO IN on the hot topics surrounding the NBA Finals.

The other big news, of course, surrounding the Warriors-Raptors series was the potential achilles injury suffered by Golden State’s Kevin Durant at the beginning of the second period of game five. Durant had missed nine games and a month’s time with an injured “calf”, but the two-time NBA Finals MVP is now obviously done for this series, and potentially the 2019-20 season.

Social media was quick to play the blame game with Durant’s unfortunate injury, but is there fault to be place here, and if so, with whom? The Warriors’ front office? The Warriors’ team doctors who cleared him? Or was it just something that happens in pro sports?

The fellas also dish on a quick preview of the NBPA Top 100 Camp taking place this week at the University of Virginia that Ron is attending. Who are the talents that Ron looks forward to evaluating that were not at Pangos Camp?