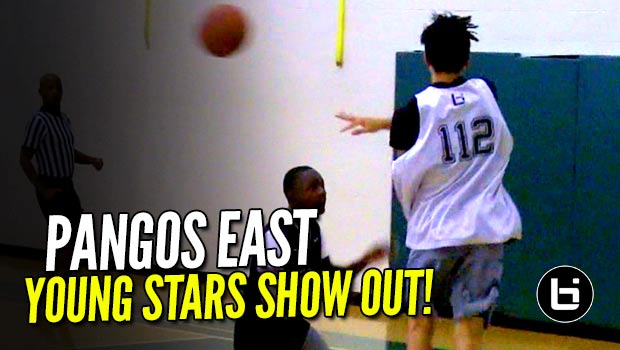 The Pangos All-East Frosh/Soph Camp  was the most talent-laden of the four camps on the fall tour with one to go and it ended with a well-played ...(Read more)

The Pangos All-East Frosh/Soph Camp  was the most talent-laden of the four camps on the fall tour with one to go and it ended with a well-played Cream of the Crop Top 30 All-Star Game. Check below for full recap and raw footage from day two of the loaded event.

Sometimes a player takes control and dominates not so much by his individual talent level and/or statistics, but by the sheer force of his will and dominant personality. Such was the case for 6-foot-2 sophomore (2019) guard Cole Anthony of Archbishop Malloy (Queens, N.Y.) at the Pangos All-East Frosh/Soph Camp held at the RiverWinds Center (West Deptford, N.J.). Make no mistake about it; the son of former NBA guard Greg Anthony is a high-major talent with plenty of skill and savvy, but he dominates just as much with his physicality, his mental makeup and magnetic personality.

It’s hard to miss Anthony on the court and at times this past weekend, his production and execution matched his already impressive talent-level for an incoming tenth-grader. Even when he wasn’t dominant, he still made an impact with his presence and personality. He was the pied piper of an impressive group of talent and should help Malloy be a major factor in the New York’s ultra-competitive Catholic League. Anthony was named camp Most Outstanding Player.

There was also a special eighth-grader in attendance: 6-foot-8 Trey Patterson of Rutgers Prep (Somerset, N.J.). He scored a respectable six points in the Cream of the Crop Top 30 all-star game (reserved for the camp’s best players), but the mark he left on the scouts in attendance was indelible.

Cream of the Crop Standouts

In an all-star game that was played relatively well considering the environment, the Black Team came away with a 106-99 victory over the White team. Igiehon dominated with power moves inside (10 points, six rebounds) and was named team co-MVP alongside Willis (team-high 15 points). Co-MVPS for the white team were Jones, who scored a game-high 16 points, including two 3-pointers, and 6-foot-7 sophomore (2019) Ismael Massoud of McDuffie (Granby, Mass.). Massoud netted 10 points and used the Cream of the Crop setting to springboard his weekend in the eyes of talent evaluators with his slashing play.

Two others, both freshmen, who played well in the Cream of the Crop Game and should be considered among the best 2020 prospects in attendance were 6-foot-7 Justin Lewis of Calvert Hall (Baltimore, Md.) and 6-foot-3 Cartier Bowman of Notre Dame (Lawrenceville, N.J.). The duo really impressed veteran evaluator Frank Burlison of BurlisonOnBasketball.com. Both freshmen played for the wining Black club with Lewis scoring nine points and Bowman eight points, respectively.

We’d also be remiss if we didn’t mention 6-foot-2 2020 prospect Lynn Greer III of Roman Catholic (Philadelphia, Pa.). Considered one of the better incoming ninth-graders in the country, he didn’t get selected for the Cream of the Crop Games and unfortunately we didn’t get a chance to evaluate much of Greer, but based on our past viewings we know he’s a major talent.