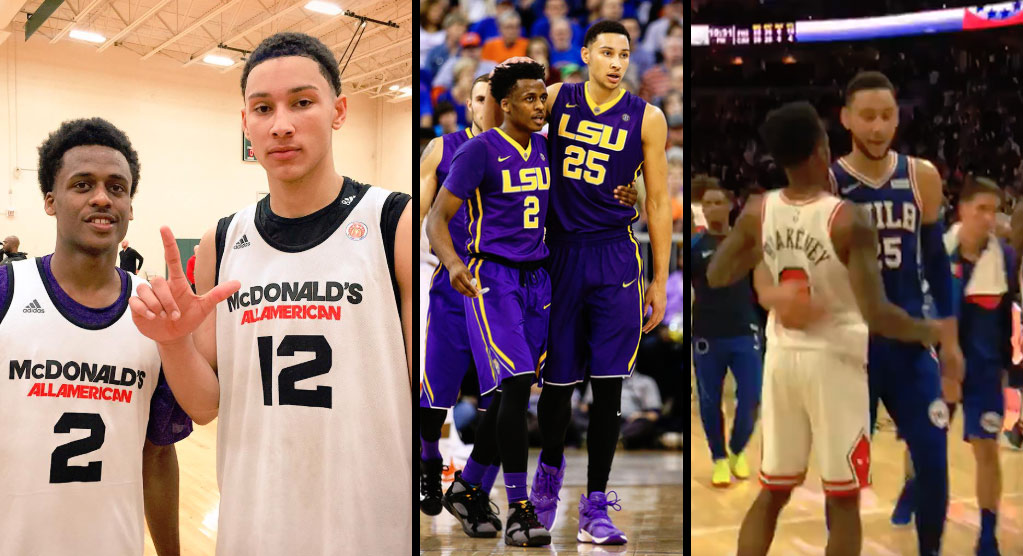 My favorite moment from the Bulls and 76ers game wasn’t one of the assists Ben Simmons had on his way to his first triple-double of the season. My favorite moment was when he and the Bulls’ Antonio Blakeney exchanged jerseys after the game.

The history between the two goes back to their high school AAU days when they were known as the “Killer B’s” on a team called Each 1 Teach 1. The dynamic duo ended their prep careers by leading the East team to victory in the 2015 McDonalds All-American Game.

“It was cool, with me running the point.” Simmons said after the game. “I like to find Antonio and he likes to shoot, so it works well.”

They enjoyed playing together so much, they decided to reunite in Louisiana. Simmons’ time with the LSU Tigers was short and controversial but enough to make him the no-brainer No. 1 pick in the NBA Draft. Blakeney hung around the swamps for another year and became the team’s No. 1 scorer.

Blakeney declared for the NBA Draft after his All-SEC season and surprisingly (to me) went undrafted. The Bulls picked him up on a two-way contract and had him spend some time in the G-League, where he won the 2018 Rookie Of The Year award. He’s been instant offense for the Bulls in the preseason and looked decent (15 PTS, 5 REB in 30 MINS) in Thursday’s regular season game against the 76ers and his former teammate.

Here are a few throwback videos of the Killer B’s, starting with a 42-minute documentary about the duo preparing for the Nike EYBL Championship at Peach Jam.