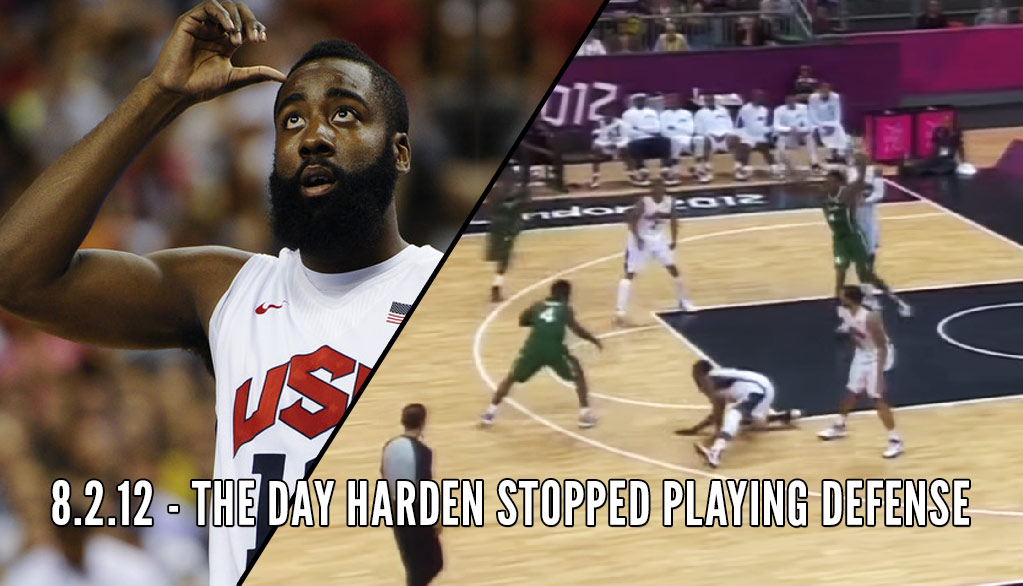 During the 2nd quarter of Team USA’s 83-point beatdown on Nigeria, point guard Tony Skinn aka the Nigerian Draymond, punched Harden in the D, causing James to hit the floor with a James Brown split. Skinn then took a step back and calmly hit a 3, pulling Nigeria within 34!  The internet went crazy with “James Harden just got his ankles broken” tweets and as much fun as it was to say he got crossed, we had to come to Harden’s defense (no pun intended) and say Skinn’s push-off makes Michael Jordan’s push-off on Byron Russell look clean.

What many people don’t remember about this game was how Harden “struggled” on offense. In 20 minutes of action, he scored 7 points on 3 of 8 shooting (1 of 5 from downtown), making him the only American to shoot less than 50%.  Thankfully his teammates – literally almost every one of them, especially Carmelo Anthony (37 points) – was on fire and scored a total of 149 points, while connecting on a record-breaking 29 3-pointers.

Another interesting story about the 156-73 win was how mad Coach Krzyzewski was when he was accused of running up the score.

“We didn’t play LeBron and Kobe in the second half, and with Carmelo shooting like that, we benched him,” Krzyzewski said. “We didn’t take any fast breaks in the fourth quarter, and we played all zone. You have to take a shot every 24 seconds, and the shots we took happened to be hit.

“I take offense to this question because there’s no way in the world that our program in the United States sets out to humiliate anyone.”

He’s right and the only person who really got humiliated that day was Harden when the above video went viral. And because of that viral video, we now have viral videos like this (I’m obviously kidding).

I’m not saying Harden’s defense is underrated, but he’s nowhere near as bad as most people make him out to be. What I will say is underrated about Harden’s game is his handles.  And  here’s a couple of vids to support that claim.