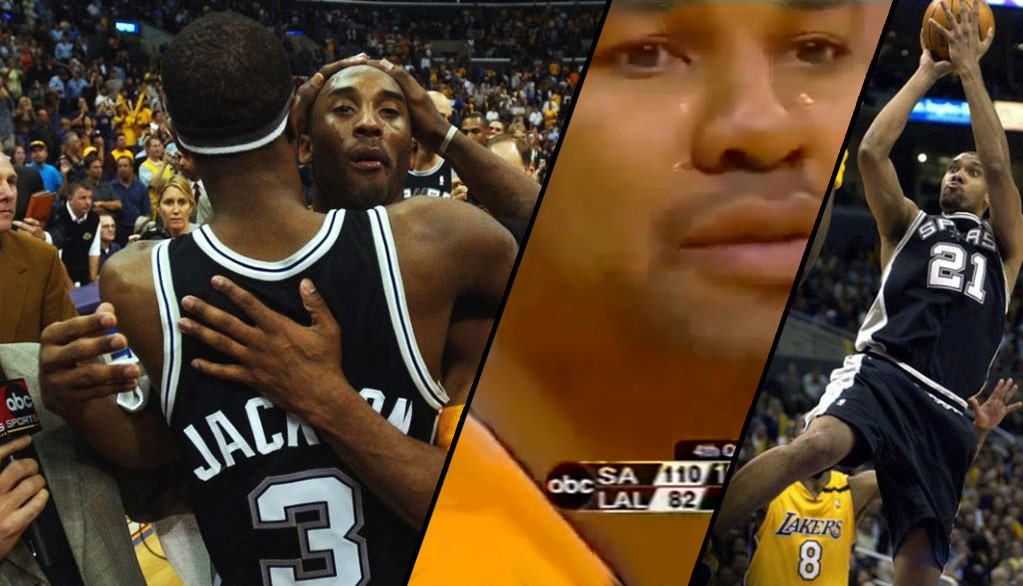 Before this game on May 15th of 2003, the “Wow, Kobe’s crying on TV” moment was during the 2002 NBA All-Star game, when the All-Star MVP was about to breakdown on live TV because he was getting booed by the town he used to call home. Although I considered myself a Kobe and Lakers megalomaniac, I couldn’t help but laugh at the sight of Kobe getting his feeling hurt by the Philly fans. Was he really expecting cheers from a crowd that had to watch his Lakers beat the 76ers in the NBA Finals just two years earlier?

Those fans probably felt some enjoyment watching Kobe cry on this night. It was the night the San Antonio Spurs found redemption and ended the Lakers three-year dynasty with a 28-point beatdown. It was a night the dynamic (and feuding) duo of Shaq and Kobe were outplayed by the duo of Tim Duncan and Tony Parker; the young Parker had 27 points compared to Kobe’s 20 and Duncan put up a beast line of 37 points (16-25 FG), 16 boards, 4 assists, and 2 blocks as Shaq had “just” 31 points and 10 boards.

With less than half a minute left in the game, Spurs celebration cigar Steve Smith hit a three and the camera cut to a crying Derek Fisher. After wiping a single tear from my eye (I told you I was a fanatic), I said, “It’s OK Fish but you kind of sucked this series. What happened to the guy who was dropping 20+ on the Wolves?”

Then the camera cut to a balling Kobe and I just said “fuck man” and said fuck every player on the Spurs roster while tapping and putting fingerprints all over my TV screen.

Kobe then gave the Spurs their credit and said, “I push myself to exhaustion” when asked how much harder he was going to work this off-season.

Unfortunately for Kobe, he had an off-season he would like to forget. Just a month after what he considered the worst feeling of his life, he went to Colorado for surgery and left with a rape charge and feeling like his NBA career was over.

On July 18th of 2003 (two days after the Lakers signed Karl Malone and Gary Payton), Kobe was on TV again, holding back tears. But this time, I wasn’t laughing or crying with him.