October 27th, 2010 – Blake Griffin’s first NBA game came a year later than the Clippers wanted, since he missed his rookie season with a broken kneecap. When he finally did step on the court, he showed why he was the #1 pick of the 2009 NBA draft: Griffin shined with a double-double of 20 points (8-14 fg, 4-6 ft), 14 rebounds, 4 assists and a pair of dunks that both made the top plays of the night.

“You could say a little frustration taken out on the rim,” said Griffin about his first dunk.

He followed that dunk up with 7 consecutive points, including another dunk that brought the crowd to it’s feet.

“He’s a stud, man. He’s going to be the face of that franchise for years to come,” said center Marcus Camby.

The clips did lose the game, mainly since they were out rebounded 51-41, and after the game, Blake took responsibility for the rebound difference.

“I wasn’t happy at all with how I blocked out on the defensive glass,” Griffin said. “They had 21 offensive rebounds and I probably gave up six of them, which is ridiculous. That should never happen.”

It’s kind of amusing to look back at Blake taking so much pride in his rebounding because that’s one category which has dipped year after year.  As a rookie Blake averaged a career-high 12.1 rebounds. He dipped to 10.9 in his 2nd season and has dropped all the way down to 7.6 in 2015.

Despite the dip in rebounding, Griffin has become a much better all-around player and the five-time All-Star was arguably the best player in the 2015 NBA playoffs. 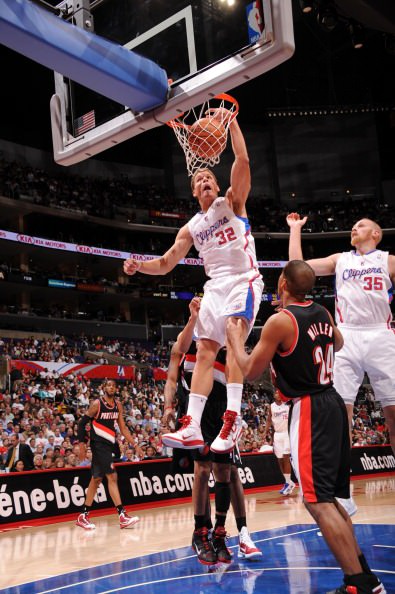