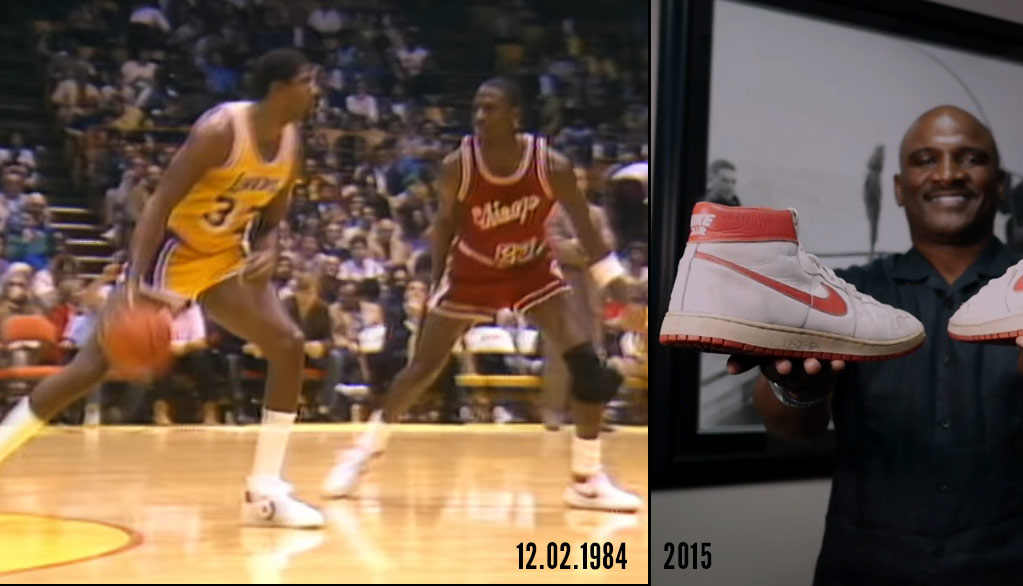 On December 2nd of 1984, the high scoring rookie — Michael Jordan already had games of 35, 37 & 45 in his first month in the league — faced off against Magic Johnson and the famous Fastbreak Lakers in the Forum for the first time and came away with a surprising win. Jordan had 20 points on 7-of-13 shooting and the two previously mentioned Bulls, Woolridge and Dailey, were the leading scorers for the Bulls with 23 and 28.  For the Lakers, Magic, coming off a minor knee injury, had a mediocre (by his standards) game with 12 points, 7 rebounds and 16 assists and Kareem Abdul-Jabbar had a game-high 32 points.

But the real winner of the game was a 15-year old ballboy. During the pre-game warmups, Khalid Ali asked Jordan if he could have the shoes he was wearing. Jordan told Ali those were just his warm-up shoes and he would be wearing a different pair during the game. That pair was a pair of rare Nike Air Ships and after the Bulls win, Ali asked for them. Jordan signed and gave the kicks to Ali and for three decades they mainly stayed hidden in his mom’s closet.

Magic and the Lakers got some payback a few months later in their second and final meeting with Jordan and the Bulls. Magic had 20 points and 12 assists, while Jordan struggled with fouls and scored just 16 points on 6-of-13 shooting. Once again, Woolridge (30) and Dailey (26) carried the Bulls.

Jordan would have plenty of more points and highlights against the Lakers over the following years, eventually winning his first NBA championship against them in 1991.

A year later, he joined Magic as teammates on the 1992 Dream Team and won Gold together. But out of all of these great moments, my favorite Michael Jordan vs Magic Johnson moment came during the last seconds Micheal ever faced off against Magic during the 1992 NBA All-Star game.